IMAGES from the 3rd ODI played between India and New Zealand in Indore on Tuesday. 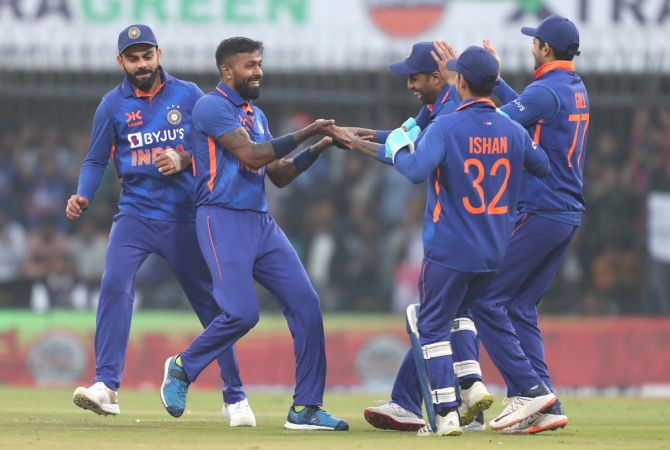 Rohit Sharma scored his first ODI hundred in three years while Shubman Gill continued his domination with another sublime ton as India completed a clean sweep with a 90-run win over New Zealand in the third match in Indore on Tuesday.

Batters from both sides lit up the dead rubber as 680 runs were scored in total at the Holkar Stadium.

Following twin failures, the New Zealand top-order put up a much better show. Devon Conway (138) stitched crucial partnerships but Shardul Thakur (3/45) and Kuldeep Yadav (3/62) regularly struck to bowl out the Black Caps for 295 in 41.2 overs. 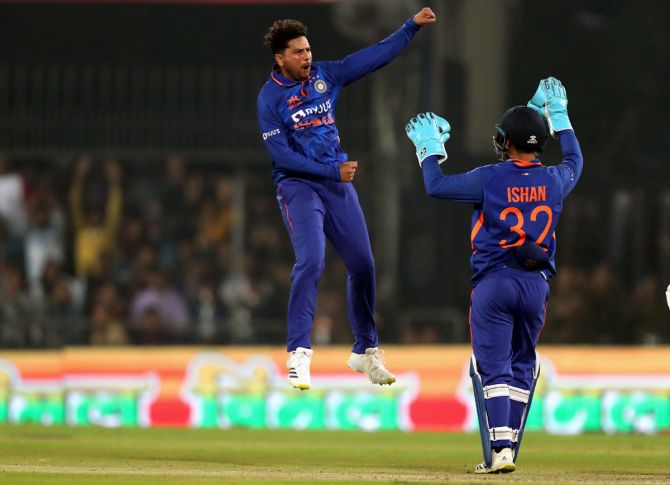 In the absence of Mohammed Shami and Mohammed Siraj, the Indian bowlers struggled initially, leaking runs as Conway tonked the ball all around the park. 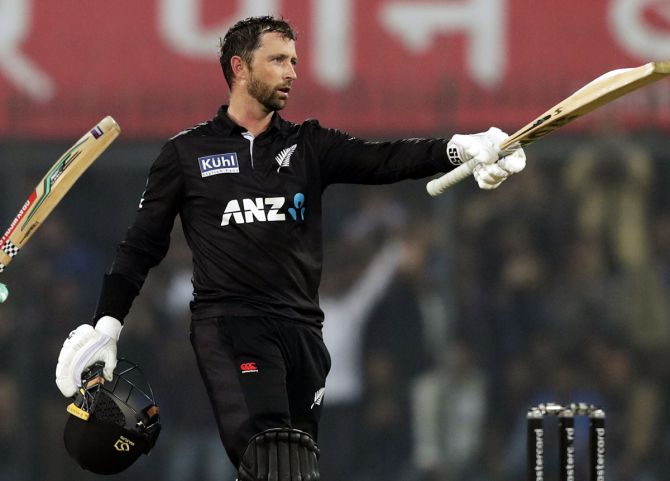 Shardul, however, managed to turn the game, as he took back-to-back wickets of Mitchell and Tom Latham (0) in the 26th over.

In his next over, Thakur sent Glenn Phillips (5) packing with a cross-seamed delivery. Umran Malik (1/52) then got Conway as the centurion pulled awkwardly with Rohit doing the rest at midwicket as the match seemed to slip out of New Zealand's grasp.

The spin duo of Kuldeep and Yuzvendra Chahal (2/43) then cleaned up the tail. 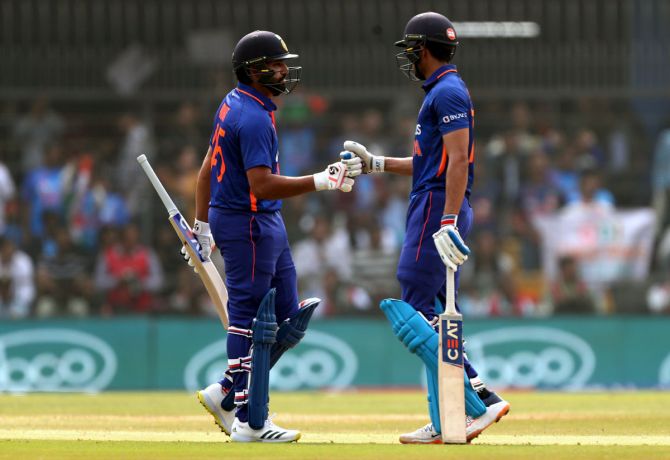 Rohit Sharma scored his first ODI century in three years while Shubman Gill continued his explosive run to power India to 385 for nine in the third and final game against New Zealand in Indore on Tuesday. 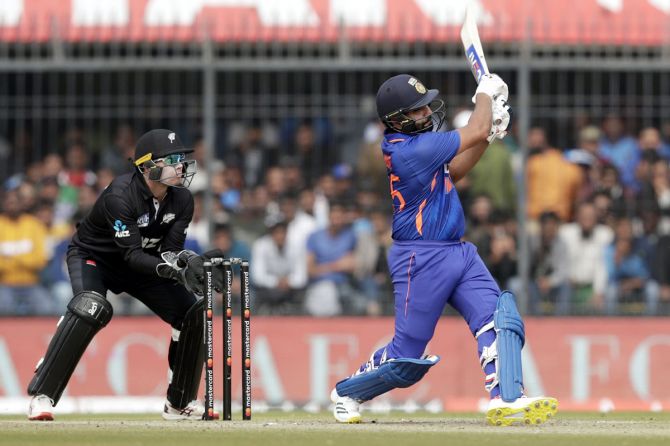 IMAGE: Rohit Sharma goes over the top during his innings of 101. Photograph: BCCI

Rahul Dravid joked on the eve of the match that bowlers don't want to bowl as soon as they land in Indore because of the batter-friendly conditions. The batting great had a point.

The New Zealanders rolling over their arms during the first 25 overs would have shared Dravid's sentiment. At one point every ball that Rohit and Gill's bat touched was either flying to the boundary or over it.

Gill hit four fours and a six to plunder 22 runs off Lockie Ferguson in the eighth over, symbolising the kind of form the 23-year-old has been in lately. The youngster didn't have to even time the ball for it to run to the boundary. After three fours, he launched the short ball for an upper-cut six. 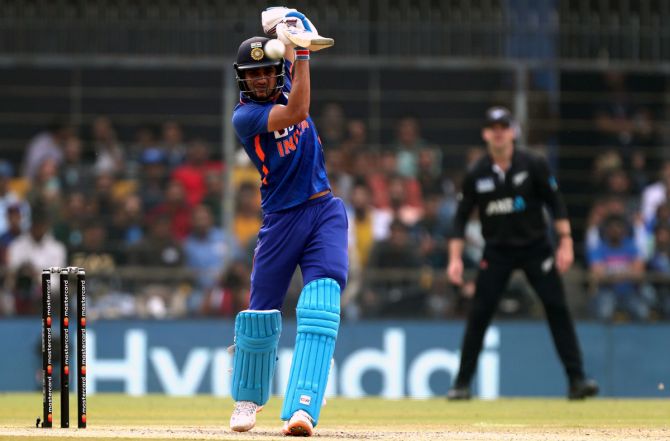 He reached his half-century when he drove the ball square off extra cover for a stylish four. A couple of overs later Rohit, too, brought up his fifty with a flat six over Mitchell Santner's head.

With the outfield quick and the wicket flat, the rather inexperienced New Zealand bowling unit had no answers to the Indian openers' carnage.

India raced to 200 with Rohit and Gill sharing 22 fours and 11 sixes between them. Matching each other's strike rates, the 26th over saw both Rohit and Gill getting their centuries. Rohit pulled away to deep square to get to his century. Three balls later, Gill got to the triple-figure mark, his third in four innings.

New Zealand skipper Tom Latham used as many as six bowlers and it was his sixth option -- spinner Michael Bracewell -- who provided the tourists their first breakthrough.

Trying to slog one out of the park, Rohit missed the ball as it kept low and turned to eventually hit the stumps. His wicket was met with a roar by the partisan crowd, welcoming Virat Kohli (36). 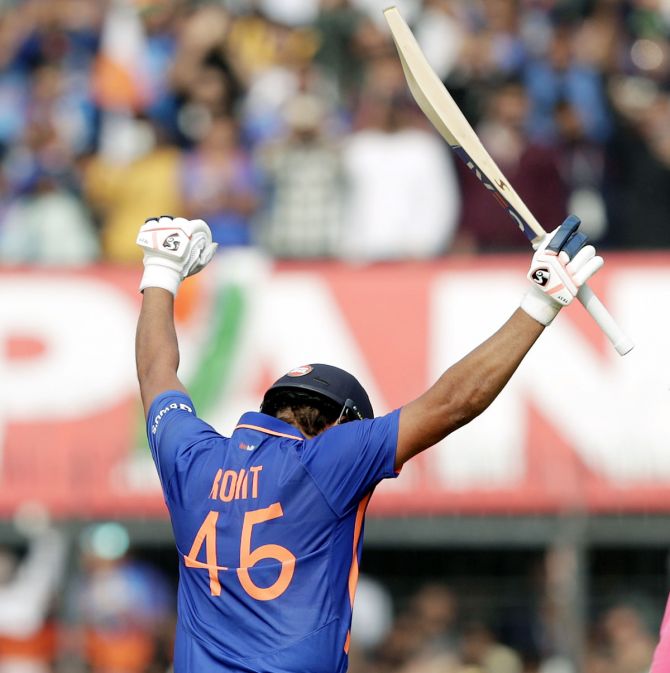 A miscued shot in the next over spelt the end of Gill's innings as New Zealand struck twice in quick succession.

Ishan Kishan (17) didn't look too comfortable and took nine balls to open his account. A yes-no with Kohli, who had sprinted halfway, marked the end of the wicketkeeper batter's stay in the middle. IMAGE: Blair Tickner celebrates with his team-mates after taking the wicket of Shubman Gill. Photograph: BCCI

New Zealand were able to bring down the boundaries and sixes and, looking to play a big shot, Kohli couldn't beat Finn Allen at mid-off.

Looking on course for a 400-plus score, India endured a familiar middle-order batting collapse, before Hardik Pandya (54) provided the final flourish. 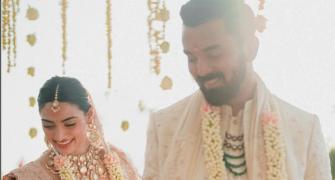 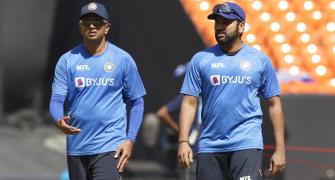 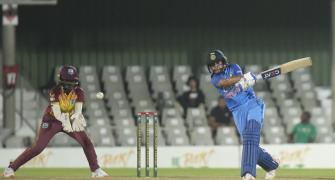 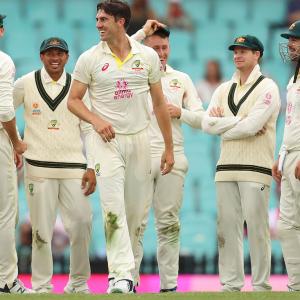 'Why is Australia not playing a tour game in India?'