Nadeem bags another five-for as Windies A force draw 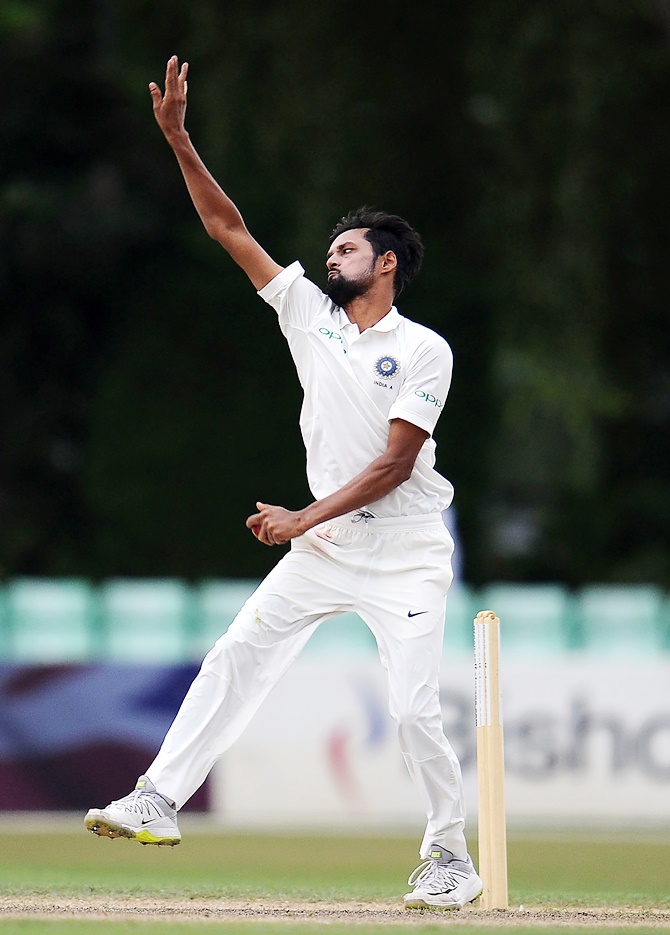 IMAGE: Left-arm spinner Shahbaz Nadeem emerged India’s most successful bowler with figures of 5 for 103 in 41 overs in the third ‘Test’ against West Indies A. Photograph: Harry Trump/Getty Images

The West Indies A top-order put up a gutsy show to force a draw despite another five-wicket haul by left-arm spinner Shahbaz Nadeem as India A won the unofficial three-'Test' series 2-0.

Chasing a stiff target of 373, West Indies A started the day on 37 for no loss, needing another 336 runs on the fourth day but only reached as far as 314 for 6 in the end.

Opener Jeremy Solozano's dogged 92 off 252 balls along with No 3 Brandon King's attacking 77 off 84 balls and senior international Sunil Ambris's 69 off 142 helped the home team earn a draw after losing the first two 'Tests'.

Nadeem turned out to be India’s best bowler once again with figures of 5 for 103 in 41 overs.

The Jharkhand orthodox left-arm, one of the most consistent bowlers in the Indian domestic circuit, played two of the three games and had three 'five-for' in four innings, finishing with 15 wickets in the series.

The series was a good one for the Paras Mhambrey-coached A side which was dominant for the better part.

Umesh Yadav also got overs under his belt -- 30 of them including both innings with a couple of wickets.

The biggest gain has to be Shubman Gill's double hundred under pressure, which is indication enough that the Punjab lad is ready for the next level.

On the final day, the West Indies’ opening pair of Montcin Hodge (25 off 82 balls) and Solozano batted the first hour before Nadeem drew first blood with 68 on the board.

However, King, who came in at one down was in a mood to smash it all around, hitting 10 fours and three sixes, during the 99-run stand in only 17.5 overs with Solozano before rival skipper Hanuma Vihari dismissed him caught by Mayank Agarwal.

The match, as a contest, was effectively over when Ambris and Solozano added another 60 runs for the third wicket in 21.1 overs.

This partnership went a long way in dashing India A's hopes of a clean sweep.

Ambris, who recently played in the ICC World Cup, then had a couple of small but significant partnerships with Jermaine Blackwood and Jahmar Hamilton which ate up crucial overs.

By the time Nadeem bowled to Ambris to get his fifth scalp, the players were waiting for the mandatory overs to finish.