IMAGE: Virat Kohli on his way to 73 off 54 balls against Gujarat Titans. Photograph: BCCI

Set a target of 169 to win their final league game, Kohli opened the innings again and smashed eight fours and two sixes to give Bangalore a platform to chase down the total and move up to fourth place.

Kohli has had a poor season by his standards, which includes three ducks in the tournament. The knock was only his second fifty in 14 IPL innings, even as he crossed the 7,000-run mark for the franchise.

"I was disappointed that I haven't done much for my team and that is what bothers me. Today was a game where I was able to create an impact for the team," said Kohli.

"I have worked really hard. Before this game, I batted non-stop in the nets for 90 minutes. I came in very free and relaxed."

Bangalore must wait as Delhi Capitals, who have a better net run rate, could move level on points and reclaim fourth spot if they beat bottom side Mumbai Indians in their final game on Saturday.

Gujarat and second-placed Lucknow Super Giants have qualified for the playoffs. 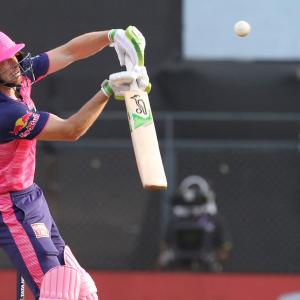