Kohli calls Bumrah the most complete bowler around

'We are really lucky to have him on our team' India captain Virat Kohli has declared Jasprit Bumrah as 'the most complete bowler in world cricket' after the quick's stellar performance in their 2-0 series sweep against West Indies.

Set an improbable target of 468 late on day three, West Indies lost their final six wickets for 51 runs and were bowled out of 210 to hand India a 257-run win in the second Test at Sabina Park on Monday.

Bumrah finished as the leading wicket-taker in the series with 13 dismissals at an exceptional average of 9.23, which follows his impressive performance at this year's World Cup.

"There is not much you can say about Jasprit, the way he has been bowling," Kohli told a news conference. "All we can say is we are really lucky to have him on our team."

"He confuses you with angles, with swing, he'll set up for the outswinger, then bowl the inswinger, and it's coming at pace, and then he can hit you with bouncers as well. So, I think he is the most complete bowler in world cricket right now."

Bowling at a sustained pace and moving the ball through the air and off the seam, Bumrah ripped through the Windies batting order twice in the series, including a hat-trick in the first innings spell of 6-27 in the second test.

His devastating spell of 5-7 in the first Test made him the first bowler from Asia to take to take five-wicket hauls in Australia, England, South Africa and the West Indies - in only his 11th Test.

"He has absolute control of what he is doing. So when he steps out on the field, he knows how much he can contribute for the team," Kohli said.

"It is really pleasing to see a guy who was tagged as a T20 specialist, he came in and took over the One-day scene, and now he is taking over Test cricket."

Kohli was also impressed with Hanuma Vihari's assuring presence at the crease as the middle-order batsman enjoyed a breakthrough series in the Caribbean.

The 25-year-old finished as the top run-scorer with 289 runs that included a century and two half-centuries.

"I think the find of the series has to be Hanuma Vihari," Kohli added.

"The way he has batted under pressure... his skills we outstanding, his temperament was top notch."

India's series sweep helped them claim the top spot in the inaugural World Test Championship with 120 points ahead of their home series against South Africa.

New Zealand and Sri Lanka, who shared their series 1-1, follow with 60 points each.

© Copyright 2020 Reuters Limited. All rights reserved. Republication or redistribution of Reuters content, including by framing or similar means, is expressly prohibited without the prior written consent of Reuters. Reuters shall not be liable for any errors or delays in the content, or for any actions taken in reliance thereon.
Related News: West Indies, Kohli, Jasprit Bumrah, Hanuma Vihari, South Africa
SHARE THIS STORYCOMMENT
Print this article 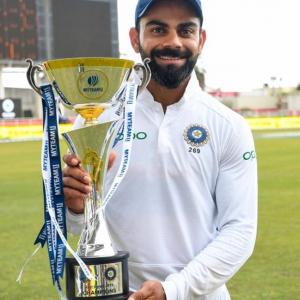