Williamson was seen fielding in New Zealand's 13-run loss to England in a warm-up game on Wednesday but the Kiwi skipper didn't bat as a precautionary measure, according to Stead.

The coach said Williamson's elbow injury had 'flared up a little bit' after the three-wicket loss to Australia in the first warm-up game on Monday. The Kiwi skipper had hit a 30-ball 37.

When asked whether Williamson might have to miss matches during the tournament, Stead, although optimistic, said 'there's always that chance'.

"We're still pretty hopeful and confident that if we get the rest right, initially here now, and get that balance right then he should be right to play," Stead was quoted as saying by stuff.co.nz.

New Zealand open their campaign against Pakistan in Sharjah on Tuesday but play their other four Super 12 matches in the space of seven days between October October 31 to November 7 which leaves little room for rest.

"Kane is a prodigious hitter of and balls, he loves to prepare that way as well, and in some ways that's probably the worst thing he can do, is over-hit at times.

"So it's really getting that balance right, between feeling ready and feeling prepared to go, and making sure we don't aggravate anything," Stead said.

Last week, Williamson had said that the recovery from the elbow problem, which has been bothering him for a while, has been slow.

He also divulged that the problem was impacting his batting as it affected his grip.

Talking about the team's performance, the coach said the side is likely to stick with the three-seamer and two-spinner bowling attack.

New Zealand lost both its warm-up games in the run-up to the tournament.

"We've had that balance for quite a while and I think it's still the right balance for most of the conditions here as well," he said.

"We'll weigh up what we think around Sharjah in particular and if we think there needs to be anything different there for that first game against Pakistan, but that's a little way down the track," he added. 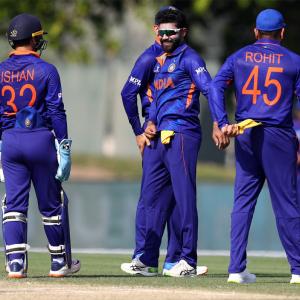