News
Business
Movies
Sports
Cricket
Get Ahead
Money Tips
Shopping
Sign in  |  Create a Rediffmail account
Rediff.com  » Cricket » Jagmohan Dalmiya: The man who showed who is the boss 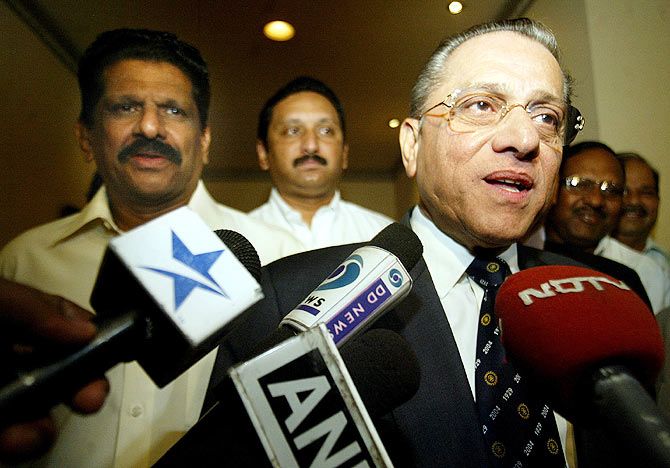 Jagmohan Dalmiya was an astute cricket administrator and he changed the face of Indian cricket. He, along with then Board of Control for Cricket in India (BCCI) president IS Bindra, ended state-owned Doordarhan's monopoly over TV rights and ushered in a new era of cricket where India gradually became the power centre.

Dalmiya's finest hour, of course, was the 1996 World Cup where broadcast rights were sold for $10 million and the title sponsorship went for a handsome $13 million. Stories of him turning around the finances of International Cricket Council (ICC) are aplenty. It was rumoured that both England and Australia feared him.

They feared that he would divide the cricketing world and challenge the supremacy of the old establishment. Dalmiya did challenge their supremacy by adding more associate nations from Asia. When he took charge as the ICC president in 1997, there were only five associate nations: Bangladesh, UAE, Singapore, Hong Kong and Malaysia; within a year, the number grew to 14.

Sachin Tendulkar, the god of Indian cricket, was charged with ball tampering by match referee and former England player Mike Denness on India's tour of South Africa. Four other players, including Virender Sehwag, were banned for excessive appealing.

Outrage -- not the kind we see on social media these days -- ensued.

Effigies were burnt, threats were made and word on the street was that India was being given a raw deal. The media backed India and it's something Dalmiya played on.

There were threats to cancel England's next tour of India if the bans weren't overturned.

ICC was accused of discrimination and charges of racism were made against Denness. It was as if India was once again fighting the colonial powers with Dalmiya leading the charge. ICC decided to back Denness, even as Dalmiya increased the pressure and refused to play the third Test until Denness was removed.

There were many discussions and meetings but Dalmiya refused to budge. It was the first time

BCCI had flexed its muscles. Others began to see BCCI as a bully. The third Test match went ahead but wasn't given an official status and Dennees was removed as match referee.

In fact, he served as a match referee for only two more matches after that.

The power centre of cricket soon shifted towards the sub-continent with BCCI being portrayed as an organisation fighting for "justice". The British press, of course, blasted Dalmiya. One newspaper even called him "a control freak and a player who plays political games".

From that incident, BCCI was seen as an organisation you didn't mess with. Steve Bucknor, the well-respected umpire from the West Indies, saw his career end abruptly when he got under the skin of some Indian players.

Dalmiya had already tilted the balance with his financial turnaround of ICC but it was the Dennees incident, which established India as the ultimate power in world cricket. There can be little doubt about Dalmiya's role in making India and BCCI the cricketing powerhouse it has become today.

IMAGE (Bottom): Fans hold a banner during a match in support of Sachin Tendulkar during the ball-tampering controversy in 2001.