News
Business
Movies
Sports
Cricket
Get Ahead
Money Tips
Shopping
Sign in  |  Create a Rediffmail account
Rediff.com  » Cricket » Ashwin: I am no slouch in ODIs

'It is not due to my effort that I am sitting out of the team, it is due to the supply and demand that the team requires.'
Ravichandran Ashwin tries to figure out why he is not being considered for the Indian team in ODIs and T20Is.
Rediff.com's Harish Kotian listens in. It has nearly been two years since he figured for India in ODIs and ace spinner Ravichandran Ashwin still can't fathom why he has fallen out of favour in limited overs cricket.

Ashwin played his last ODI for India in the West Indies in June 2017. India's defeat to Pakistan in the 2017 Champions Trophy final made the team management opt for wicket-taking options in the middle overs.

Accordingly, Ashwin along with Ravindra Jadeja lost their places to the young wrist spin duo of Kuldeep Yadav and Yuzvendra Chahal, who have been quite successful in limited overs cricket in the last two years.

Asked his reaction on playing in just one format for India, Ashwin replied: "I don't know. It is a perception. I am not looking at it like that because I am no slouch. In the white ball format, my records are not bad like what is perceived to be."

"It is out of perception that wrist spinners are required in the modern day one day cricket format that (is why) I am sitting out. The last one day match that I played I got 3/28."

The experienced spinner believes he has been unfairly kept out of the Indian ODI team despite boasting a good record.

"I would always look back at my career and say it is not due to my effort that I am sitting out of the team, it is due to the supply and demand that the team requires." "I went and played in the Syed Mushtaq Ali and I had a decent outing and that is how I look at it. I am playing cricket and it is not like I need to specialise in one particular format. It is the challenges of the modern day game, I will be looking forward to do whatever I can do best."

In a first of its kind in the country, these memorabilia are miniature figurines of India's popular cricket stars.

Ashwin says he keeps working on his bowling all the time and looks to improve with every game.

"I just enjoy the sport, the sport has given me everything. When I picked up the bat and ball as a eight year old it gave me everything, I love it. Even today when I play a club game, when I play on the streets I enjoy it," he added.

"For me, it is all about playing the game that I love and excelling in the best possible way I can."

With the World Cup scheduled to be held a couple of weeks after the IPL, there have been murmurs with regards to the workload of the World Cup-bound Indian players.

Ashwin, who will lead the Kings XI Punjab in the IPL, says workload management of the top Indian players will depend on how the teams fare during the course of the tournament.

"I don't think as a cricketer you can look far ahead about what needs to be done and how you can manage it. As a cricketer or as a sportsperson you just concentrate on what happens today. The franchise has invested money on you."

"Obviously, it is a massive tournament, everybody plays for pride, everybody wants to perform and excel. It definitely stays at the back of the head because it is being spoken about a lot more right now," Ashwin pointed out.

Ashwin believes the bowlers's workload need to be monitored carefully during the IPL, especially the fast bowlers.

"It is a dream for every cricketer to represent his country at the World Cup, it is a big stage. I think that is the point of view from they (the BCCI are coming. Obviously, bowlers have more chances of succumbing to injuries because of the workload they go through, it is physically more hard on the body than the batters," Ashwin explained.

The BCCI has only announced the schedule for the first two weeks of the IPL from March 23 to April 5. The schedule for the remaining games has not yet been released as the organisers look to work around the fixtures with an eye on the Lok Sabha election which will also be held in April-May.

Ashwin felt the election needs to get priority and there is no problem even if the the remainder of the IPL schedule is delayed.

"The elections are something that is more important than anything else," Ashwin said. "It is right that the elections get the first priority and obviously we have to make sure that the security and all of that needs to go into it. It is not a joke to assemble a schedule based on that, so I appreciate the fact they are taking time but I am sure it will be out anytime soon." 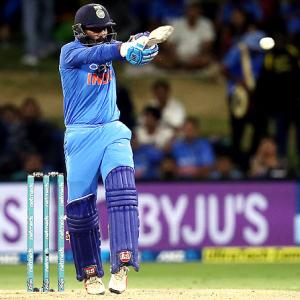