News
Business
Movies
Sports
Cricket
Get Ahead
Money Tips
Shopping
Sign in  |  Create a Rediffmail account
Rediff.com  » Cricket » Is this why KL Rahul is struggling in Test cricket?

'He has got the game, but somewhere I feel he does not express himself, the way he needs to. I think he needs to come out and back his game.'

KL Rahul's struggling run in the opening slot has left former India opener Wasim Jaffer baffled and he believes the Karnataka player seems caught in an unsolved jigsaw puzzle despite having the ability to do well.

Rahul's place in the team has been questioned due to his failure to own the opening slot despite being given a long rope by the team management. Rahul averages 36.82 in the opening slot, which he has occupied in 33 of the 36 games he has been part of.

"I feel a little bit disappointed with K L Rahul because he has got so much ability, he is one of the guys (players) who has got 100 in all three formats," Jaffer said in Mumbai on Thursday.

"And his mode of dismissals make me a bit disappointed because he gets out very softly at times. He has got a lot of ability and that is why he is getting so many chances, because people believe that he is going to come good.

"The way he gets out and the way he does not get that many runs, that surprises me...I feel somewhere he is missing those puzzles (sic) in his jigsaw," he said.

Rahul managed to score just 101 runs in the two Tests against West Indies, which India won 2-0.

Asked whether Rahul has been struggling with the mental aspect of the game, Jaffer said, "Definitely it could be one of those things."

"I feel he just holds himself back and doesn't express himself the way he expresses probably in first-class cricket, but the moment he goes into international cricket, I feel that he holds himself a little bit," he added.

According to Jaffer, who played 31 Tests and two ODIs for India, there is no issue with Rahul's technique.

"He has got the game, but somewhere I feel he does not express himself, the way he needs to. I think he needs to come out and back his game. Sometimes I feel he gets too defensive for no reason, he needs to score lot more consistently," he reasoned.

Asked whether Rohit Sharma can be an opener in Tests, Jaffer opined, "He can be looked up to as an opening (batsman) because Rohit has the ability. Nobody expected him to open in the ODIs and score these many runs. Once you put him in that position, only then you will find out."

The domestic cricket legend also had a word of advice for young India and Mumbai opener Prithvi Shaw, saying he needs to "look at guys like Virat Kohli".

Shaw is currently suspended for eight months for an anti-doping violation.

Though Jaffer lauded India's performance in the West Indies as exceptional, he said the team needs to show similar dominance in other countries outside the sub-continent.

"I feel, we need to see the domination of the Indian team in places like England, Australia, New Zealand, South Africa ....  they have beaten Australia, beaten South Africa. 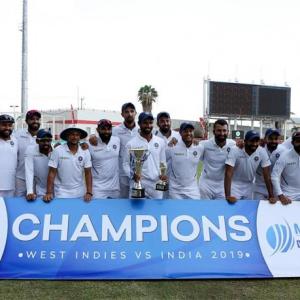