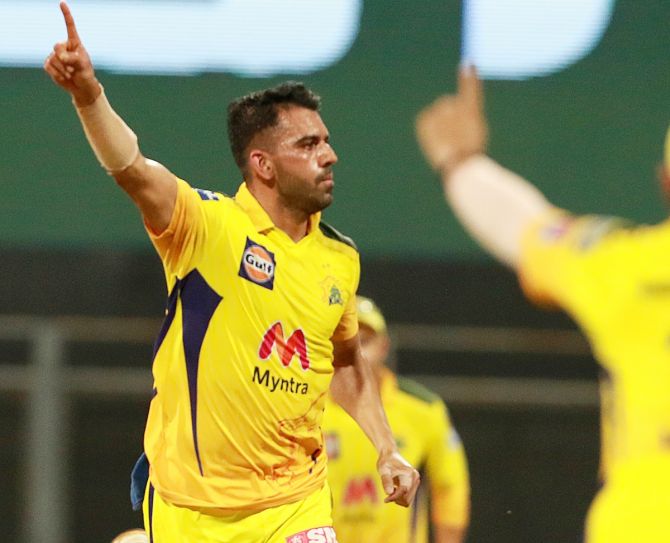 It was a bowling masterclass by Deepak Chahar that dismantled the Punjab Kings top order. The medium pacer removed Mayank Agarwal for a two-ball duck in the first over itself. The ball swung viciously away from the right-hander and hit the top of off-stump.

A knuckle ball got the 'Universe Boss' out. Ravindra Jadeja ran in to take an absolute blinder, diving forward at point, to dismiss Chris Gayle for 10 (10) in the fifth over.

Chahar wasn't done yet. Nicholas Pooran holed out to Shardul Thakur at deep backward square leg for a duck in the same over.

Chahar was on fire! A seam-up 140 kmph delivery in the seventh over saw Deepak Hooda go through with his shot early and end up playing it into the safe hands of Faf du Plessis at short cover.

Chahar bowled a spectacular first spell with Dhoni continuing to bowl him beyond the Powerplay for all his four overs in one stretch. He ended his spell with four wickets for 13 runs, bowling an incredible 18 dot balls, his best-ever IPL figures.

Punjab Kings found themselves tottering at 26 for five after 6.2 overs.

As they rely heavily on their top order, 26 for 5 meant the end of whatever hopes they may have entertained of winning the game.

Only Shahrukh Khan offered some resistance, the No 6 batsman scored 47 off 36 balls and stayed till the last over but found little support.

Jhye Richardson scored 15 off 22 and added 31 for the sixth wicket with Shahrukh, but it hardly mattered.

Chahar's uninterrupted burst at the top helped Chennai pin down Punjab Kings to 106 for 8. 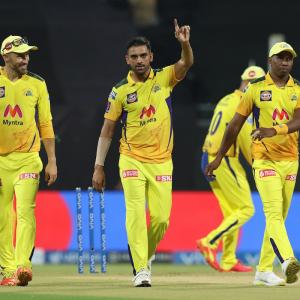