Delhi Capitals recorded a clinical 44 run win over Chennai Super Kings after Prithvi Shaw gave them the impetus at the top of the order.

CSK put Delhi into bat after winning the toss hoping they would restrict DC to a low total but that was not to be.

Shaw looked in impeccable form right at the onset with back-to-back full flowing cover drives in the opening over itself.

It was a sign of what was to come and he didn't disappoint. He found runs on the leg side, on the off side, off the spinners, off the seamers and all the runs came of beautifully timed shots.

Shaw's innings was a treat to watch as he went about accumulating runs at will.

There was barely a false shot played and he got to his 50 off 35 balls. He took on the bowlers, particularly Piyush Chawla and Ravindra Jadeja, without fear and stepped it up after getting his half-century.

His stay at the crease was cut short when he charged at a Chawla delivery only to miss it and get stumped by Mahendra Singh Dhoni -- quicksilver as always -- for 64 off 43 balls.

He was out in the 13th over, but by then he had done his job to put Delhi on the front foot. 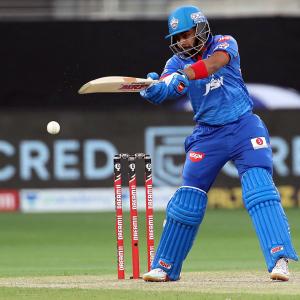