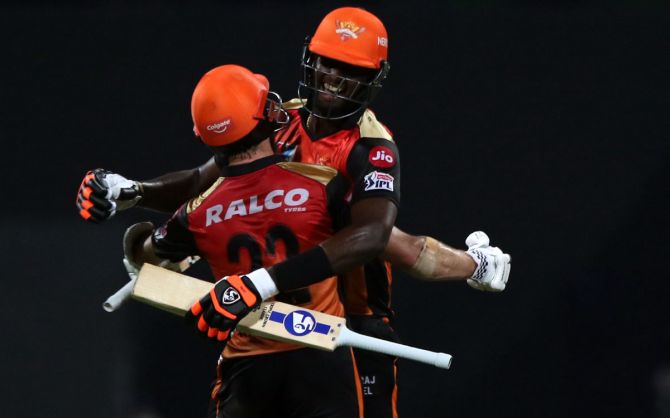 Williamson scored an unbeaten 50 off 44 balls, while Holder, who took three wickets for 25 runs earlier, hit an unbeaten 24 off 20 balls, as SunRisers chased down the Royal Challengers' 131 with two balls to spare. 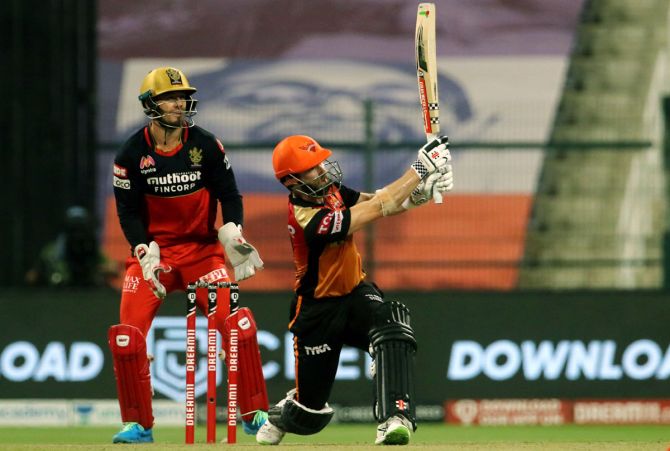 IMAGE: Kane Williamson sends one over the ropes. Photograph: BCCI/IPL

They will take on Delhi Capitals in a virtual semi-final in Sunday's Qualifier 2 match. The winners progress to the IPL final against Mumbai Indians.

Holder and Williamson rallied Sunrisers after the loss of a few early wickets, putting on 65 runs for the fifth wicket from 47 balls. Like the Royal Challengers, SunRisers Hyderabad did not have the best of starts. They lost Sreevats Goswami, injured wicketkeeper Wriddhiman Saha's replacement, early.

Skipper David Warner (17) too did not last long. He edged one to AB de Villiers behind the stumps off Mohammed Siraj.

Siraj switched to round the wicket. His fourth delivery came in sharply. Warner looked to make room but the ball went through his bat and arm for wicketkeeper de Villiers to take a good catch, diving to his right. The RCB players went up in appeal for a catch off the inside edge but the umpire was unmoved. However, third umpire Virender Sharma overturned the decision and Warner walked back in disbelief at being given caught behind for 17, with SRH reduced to 43-3 in the sixth over.

Manish Pandey (24) and Priyam Garg (7) too failed to make an impression, departing in quick succession.

But Williamson and Holder played sensibly. Initially, they played cautiously and then accelerated towards the end. 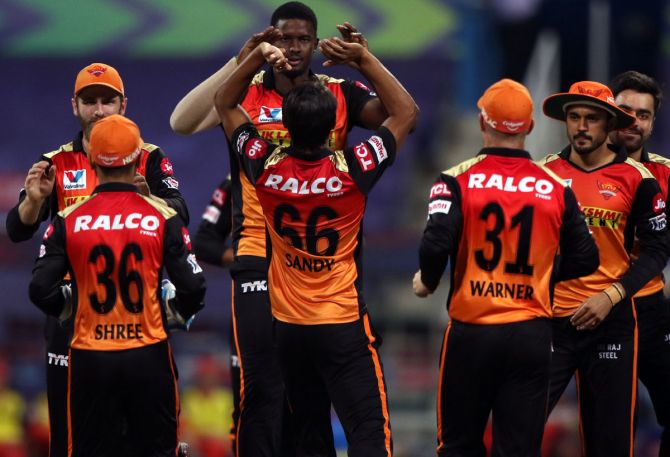 Earlier, SunRisers Hyderabad’s bowlers turned in a clinical display to restrict Royal Challengers to a modest 131 for 7.

Holder led SunRisers's bowling attack, claiming three wickets for 25 runs. He was ably supported by T Natarajan (2-33) in keeping the batting-heavy Royal Challengers under control from the start. AB de Villiers scored a timely 56 off 43 balls to somewhat enable Royal Challengers recover from a horrible start, but it was just enough to take them past the 120-run mark.

Virat Kohli’s team had a horrendous start after they were put in to bat, losing two wickets for 15 runs inside four overs.

Skipper Kohli (6), who opened the innings alongside Devdutt Padikkal (1), was the first to depart, nicking one on the leg side to Goswami off Holder. An over later, the West Indian all-rounder bagged his second scalp when Padikkal pulled one to Priyam Garg inside the circle and the Royal Challengers slumped to 15 for 2.

Aaron Finch (32 off 30), who replaced Josh Philippe, and de Villiers then set out to stabilize the innings with a 41-run third-wicket partnership. However, a double strike in the 11th over put paid to whatever hopes they may have entertained.

Finch was caught by Abdul Samad off Shahbaz Nadeem (1-30) and then a ball later, Moeen Ali was caught short off the crease, trying to steal a single off a free hit delivery, by a direct hit from Rashid Khan.

Ali hit the full delivery straight to Rashid in the covers and ran, but was caught short by a direct hit and out for a duck. Shivam Dube (8) didn't help his team’s cause, so did Washington Sundar (5).

In between, De Villiers brought up his 50 off 39 balls with a boundary off Holder, but he was soon sent packing by a gem of an yorker from Natarajan. With his exit ended Royal Challengers’ last hope.

Holder conceded Just five singles from the penultimate over as Navdeep Saini (9) and Mohammed Siraj (10) threw their bats around to spruce up the total. 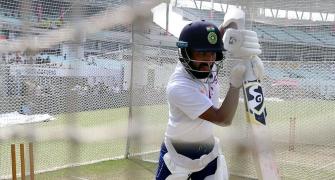 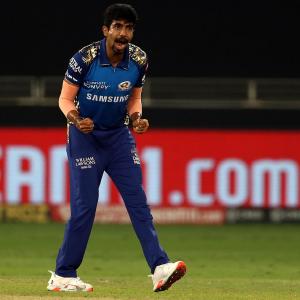