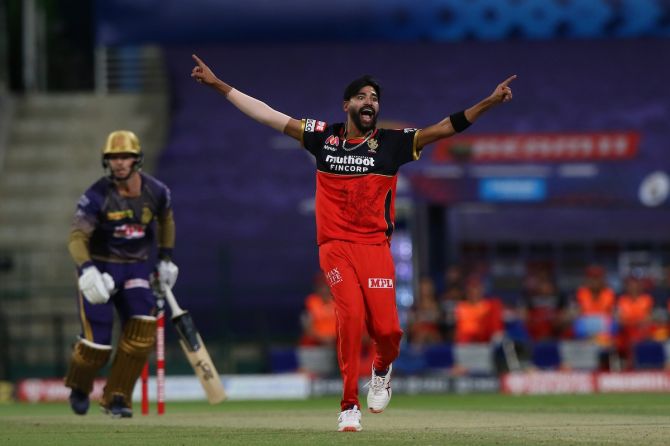 IMAGE: Pacer Mohammed Siraj was Royal Challengers Bangalore’s wrecker-in-chief as Kolkata Knight Riders were shot out for 84 in the Indian Premier League match in Abu Dhabi on Wednesday. Photograph: BCCI/IPL

Royal Challengers Bangalore had a short and easy day at work, disposing off Kolkata Knight Riders by eight wickets in the Indian Premier League match, in Abu Dhabi, on Wednesday.

Backed by excellent bowling by pacer Mohammed Siraj and Yuzvendra Chahal’s mesmerizing spin, they restricted the Knight Riders to just 84 for 8 and then hit up the required runs in 13.3 overs.

The thumping eight-wicket victory took Royal Challengers Bangalore to second in the eight-team table with 14 points from 10 games, the same as leaders Delhi Capitals, while Kolkata Knight Riders are fourth with 10 points from as many games. 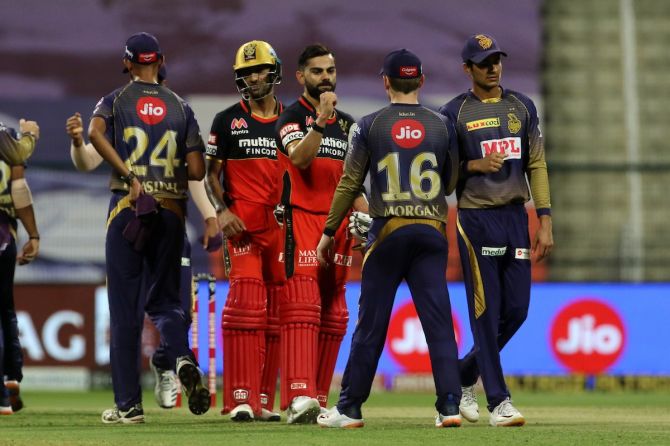 Virat Kohli’s Challengers made the chase look easy after openers Aaron Finch and Devdutt Padikkal gave them a good start.

Even their dismissal in the seventh over hardly mattered as Gurkeerat Singh Maan and Kohli guided the team effortlessly to the finish line in 13.3 overs.

The Royal Challengers lost Finch (16) after the Powerplay overs, Lockie Ferguson striking in his first over. 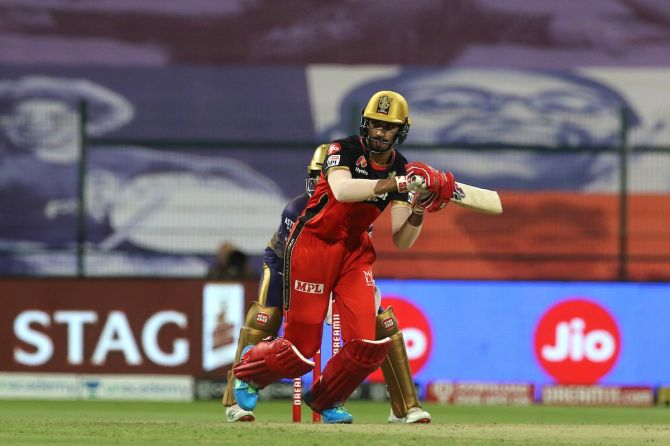 Devdutt Padikkal (25) was run-out as RCB lost two wickets in the same over. However, Kohli (18 not out) and Gurkeerat (21 not out) ensured that there were no more hiccups.

They had secured a massive 82-run win over Kolkata in in the first meeting between the two sides.

It was a forgettable day for KKR as they capped a slew of dubious records that included registering the lowest score in a 20-over IPL innings without a team getting bowled out.

It was for the first time a team played four maiden overs in a T20 innings. They also registered their lowest Powerplay score of 17 for 4. 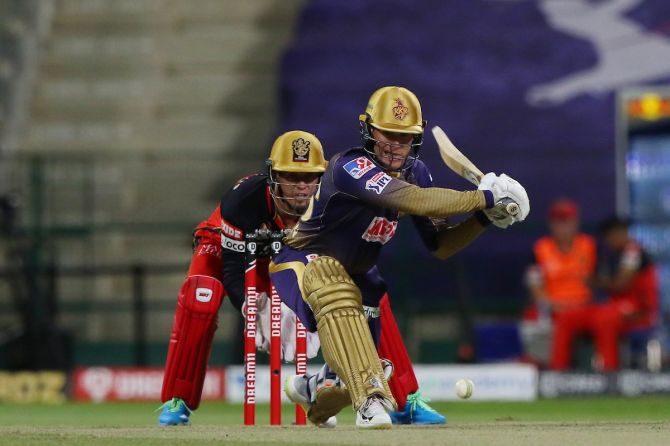 Earlier, Kolkata Knight Riders failed miserably with the bat, putting up just 84 for 8 in their 20 overs. They were 14 for 4 in the fourth over and looking down the barrel.

Electing to bat, their batsmen were all at sea against some stunning swing and spin bowling by Mohammed Siraj and Yuzvendra Chahal, who wreaked havoc as the Knight Riders collapsed like a deck of cards. 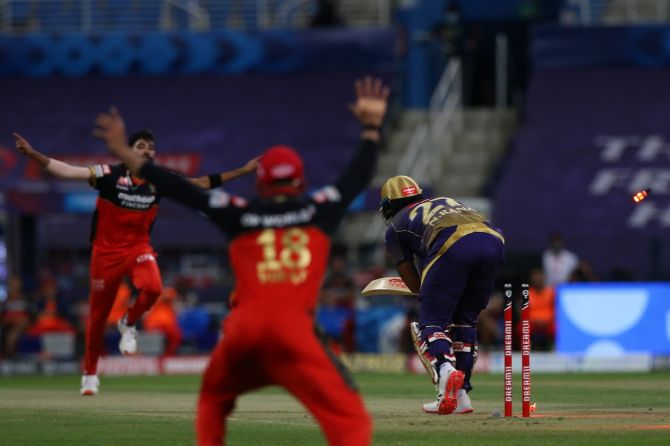 While Siraj (4-2-8-3) ran through KKR’s top order and earned the distinction of becoming the first bowler in the history of the IPL to bowl two maiden overs, Chahal (2/15) was as deceiving and precise with his turners.

It is the Knight Riders second-lowest total after their 67 all-out against Mumbai Indians in 2008.

Playing without West Indies star players Sunil Narine and Andre Russell, the Knight Riders struggled to get going and it was all over for them once skipper Eoin Morgan was dismissed by Washington Sundar for 30. 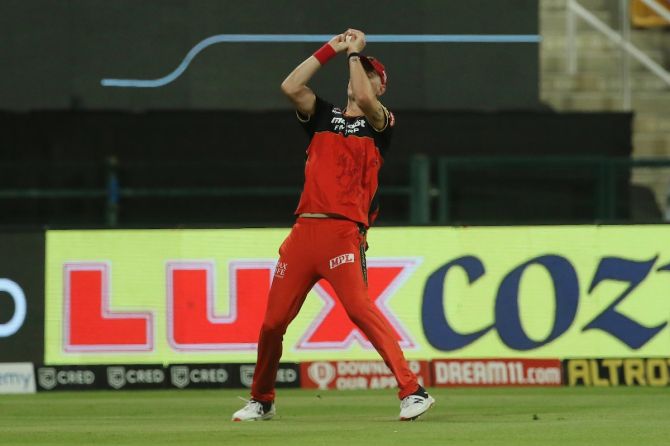 It was a masterstroke from skipper Virat Kohli to include Siraj in place of spinner Shahbaz Nadeem, keeping in mind a fresh strip.

Siraj began with a double wicket maiden over in which he dismissed opener Rahul Tripahi (1) and Nitish Rana (0) off successive deliveries.

He followed it up with another wicket-maiden over, getting rid of Tom Banton (10) in the process. 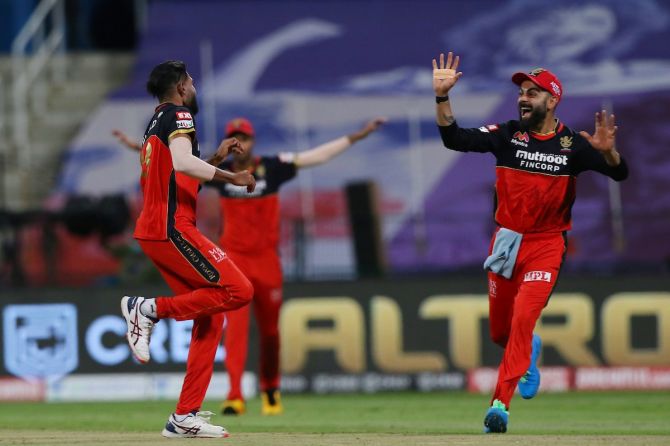 Tripathi nicked one straight back to AB de Villiers behind the stumps and off the next delivery Siraj ran through the gates of Rana for a golden duck.

In his next over, he accounted for hard-hitting English batsman Tom Banton (10) with a scrambled seam delivery to cap the best ever opening two overs in the IPL.

In between, Navdeep Saini (1/23 from thee overs) dismissed in-form opener Shubman Gill (1) after the young opener mis-timed a pull to be caught by Chris Morris as KKR looked in shambles with 14/4 inside four overs.

KKR had their most-experienced batsmen in Morgan and Karthik in the middle. But Chahal exposed latter's woes against leg-spin bowling as he trapped him leg before following a successful review.

Thereafter, it was always an uphill task for the former champions. 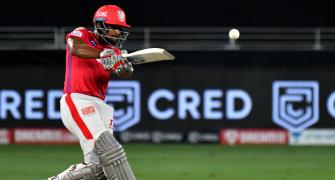 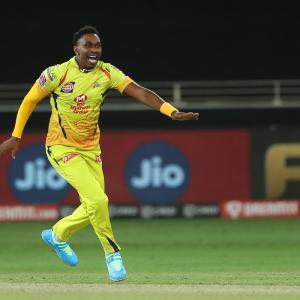 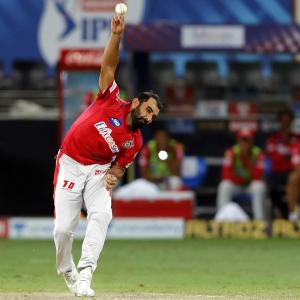