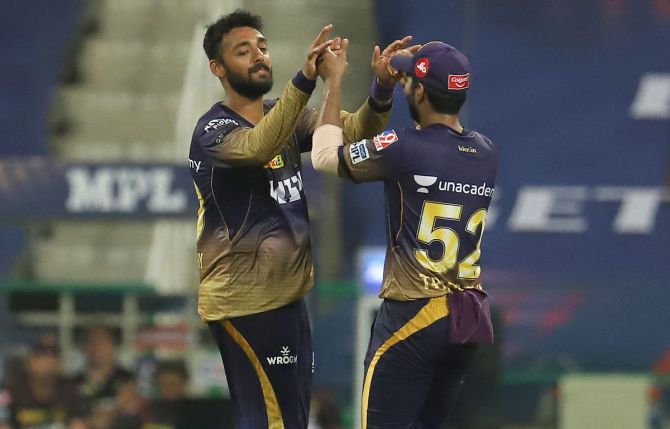 Andre Russell and Varun Chakravarthy picked up three wickets each to power Kolkata Knight Riders to an emphatic nine wicket victory over Royal Challengers Bangalore in the IPL match in Abu Dhabi on Monday.

In reply, openers Shubman Gill (48 from 34 balls) and debutant Venkatesh Iyer (41 not out from 27 balls) took apart the RCB bowlers to steer the team to victory in 10 overs.

Virat Kohli (5) was aiming for a big total after he elected to bat but his early dismissal to Prasidh Krishna proved vital for RCB.

With Devdutt Padikkal also falling for 22, RCB managed just 41 runs in the Powerplay.

Things got worse in the middle overs as RCB's batsmen failed to get the boundaries and even singles were hard to come by.

Glenn Maxwell (10) and A B de Villiers (0) failed to rise to the occasion as RCB caved in the face of some disciplined bowling by the KKR attack.

Russell started the slide as he dismissed Srikar Bharat (16) and de Villiers (0) in the ninth over.

Chakravarthy matched his team-mate when he got Maxwell and Wanindu Hasaranga off successive deliveries.

Pace bowler Lockie Ferguson also played his part with good figures of 2/24 as RCB endured a horror start to their first match in the second leg of IPL 2021 in the UAE. 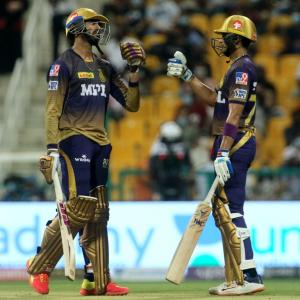