His first delivery in the Indian Premier League was smashed for a six. But he came back strongly to dismiss the batsman who hit him out of the park.

Prasanth Parameswaran has come a long way from the sleepy village of Alappuzha in Kerala to making it to cricket's big league.

"When [Virender] Sehwag hit me for a six off the first ball, Mahela [Jayawardene] asked me to drag the length back, and it paid off!" recalled the Kochi Tuskers' pacer, reflecting on his first, and prized, IPL wicket.

Was he nervous after the initial thrashing in his first match?

"I expected him to go after my bowling, so I was prepared for it.

"I wasn't nervous, as I knew what was expected off me. The format is such that batsmen are bound to go after you.

"Instead, as a bowler, you have to outwit the batsmen in the IPL," declared the gangling 25-year-old left-armer.

Sehwag, who is not one to lavish praise on players, particularly bowlers, was impressed with the showing of the Kerala pacer.

'I heard the name of Parameswaran and asked who he was. I was told that he is a new bowler from Kochi. 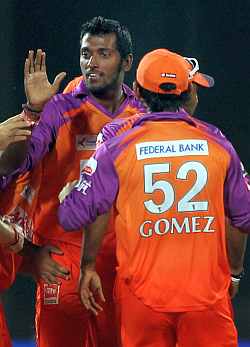 'He recovered well after that six and took the wicket. He is a good find for Kochi and for India also,' said the dashing India opener and Delhi Daredevils skipper after the match, which his side lost by seven wickets.

Parameswaran, who hails from Thanner Mukham, is a consistent performer for South Zone and Kerala. In six first-class matches he has claimed 18 wickets, at an average of 26.22. He is relatively new to Twenty20 though, but in nine outings has 13 wickets to his name.

An Indian Overseas Bank employee, he credits India pacer S Sreesanth for the little success he has already tasted.

"Sreesanth is a great motivator. He shares his experiences in the dressing room, which helps you grow as a player.

"During practice sessions, or even tournaments, he is always there to guide you. And with four more Malayalees in the ranks, the camaraderie we share in Kochi Tuskers is good," he says.

So how did the IPL thing happen?

The fact that he is a part of an IPL team is yet to sink in.

"I was called in as a nets bowler to assist Tuskers in the preparatory camp in Kochi. And now I'm here, and happy to be a part of the Tuskers. It's still like a dream!"

Kerala has just two of its cricketers who have gone on to represent the country. The first was Tinu Yohannan; now Sreesanth is making big strides. Both are pacers, and Parameswaran says he is looking to emulate them.

"They have been a major factor in Kerala's cricket. I want to bowl like Sree. Added to that, the domestic structure in Kerala has improved manifold," explained Parameswaran, who caught the selectors' attention while playing in an inter-collegiate tournament.

The IPL, he believes, is a perfect opportunity for youngsters to get noticed and showcase their talents.

"It has opened India's talent to the world. We play with the best and against the best.

"Like any other player, I too would love to play for India one day, but I know I have to work hard to earn my place in the team."

Debutants Kochi Tuskers are not doing too well in the ongoing fourth edition of the IPL and their chances of making it among the top four are bleak. Parameswaran, who came up with a good spell in Kochi's shock victory over Kolkata Knight Riders at home on Thursday, though is optimistic.

"We have a long way to go. We have done well against top teams like Delhi and Mumbai also, but we have to keep doing it on a consistent basis."

Sure, consistency will be the key to Kochi's fortunes and much will depend on Parameswaran's bowling in the comming weeks.