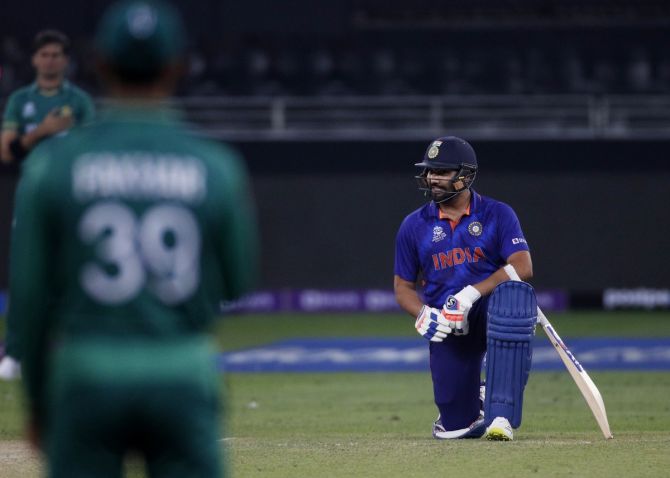 IMAGE: Rohit Sharma takes a knee along with India's players ahead of the T20 World Cup match against Pakistan, at Dubai International Stadium, on Sunday. Photograph: Hamad I Mohammed/Reuters

Captain Virat Kohli shed light on why the Indian players took the knee ahead of the start of the T20 World Cup match against Pakistan in Dubai on Sunday.

The Indian players took the knee in solidarity with the BLM (Black Lives Matter) movement. On the other hand, Pakistan stood with their hands on their hearts.

"That was communicated to us by the management, the Pakistan team agreed to pay their tribute to the same cause. We accepted our side of things and that was how it was decided," said Kohli after India suffered a 10-wicket defeat against Pakistan.

India's openers Rohit Sharma and KL Rahul took the knee in the centre, while the rest of the squad did the same outside the team dugout.

The Black Lives Matter movement gained momentum after the death of African American George Floyd at the hands of a white police officer last year.

England and the West Indies teams, along with the match officials, took a knee last summer during their three-match Test series, the first from the sport.

Captain Babar Azam led by example as Pakistan beat India in a World Cup match for the first time ever with a 10-wicket romp in a Super 12 blockbuster.

Virat Kohli played a captain's knock of 57 to rescue India from a top-order wobble and help them post a competitive 151/7 in a rematch of the inaugural 2007 final.

His counterpart Babar combined with Mohammad Rizwan to get Pakistan off to a flying start and then overwhelmed the target with 13 balls to spare to snap India's 100% win record against them in limited-overs World Cups. 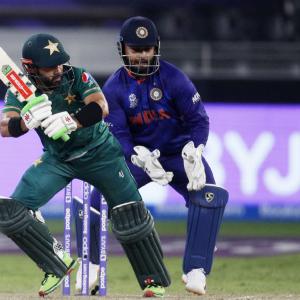 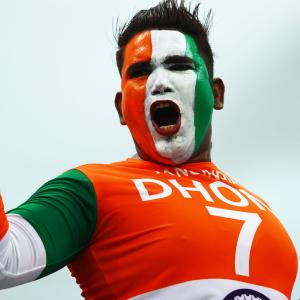