Images from Day 1 of the Pink-ball first Test between Australia and India, in Adelaide, on Thursday. Virat Kohli's enduring love affair with the Adelaide Oval resulted in a classy 74, but his untimely run-out triggered a batting collapse as India ended the opening day in the first Day/Night Test against Australia on 233 for 6, on Thursday.

Kohli, who looked in command, was run-out when his deputy Ajinkya Rahane backed out after calling for a single, just before the second new ball was taken. From a comfortable 188 for 3, India slumped to 206 for 6 as Rahane and Hanuma Vihari (16) found the pace and swing generated by the pink ball under lights too hot to handle.

Ravichandran Ashwin (batting 15) and Wriddhiman saha  (batting 9) saw off the final few overs and also got a few runs. In conditions, which can't exactly be called batting-friendly, Kohli blended the right amount of caution and aggression in his 180-ball innings, showing one and all that he is a few lightyears ahead of his peers when it comes to quality batsmanship.

If Cheteshwar Pujara (43 off 160 balls) let the bowlers dictate terms with an ultra-defensive approach, his skipper gave the opposition the respect it deserved but also from time to time played those shots to drive home a point. His 88-run partnership with Rahane (42 off 91 balls) during the final session nearly put India on even keel but fortunes tilted once Kohli was back in the pavilion.

Rahane was soon snapped up with the second new ball by Mitchell Starc (2/49), easily the best bowler in action. 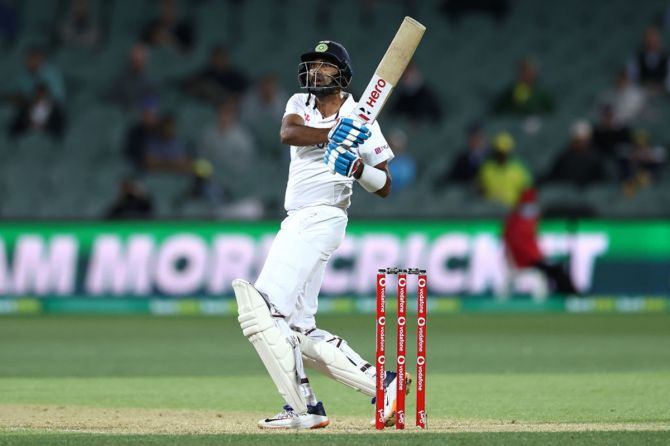 IMAGE: Ravichandran Ashwin hoists the ball over the fence for a six. Photograph: Cameron Spencer/Getty Images

The knock will certainly be among the Indian captain's favourites as he hit three kinds of pull-shots to the pacers -- two off Starc and one off Josh Hazlewood.

One of the pulls off Starc was a cheeky shot for which he just rolled his wrists to send the ball to the square leg boundary.

Then there was one off Hazlewood, where he again rolled his wrists but the ball went to the front of square.

Another pull was where he got under the ball and hit it to the mid-wicket fence. There was a classical cover-drive that brought his half-century. Prithvi Shaw's poor technique was once again exposed, but the experienced Cheteshwar Pujara's perseverance kept India afloat, at 41 for 2, in the opening session.

Pujara (batting 17 off 88 balls) safely negotiated a testing first session after Shaw (0 off 2 balls) was bowled off the game's second delivery by Mitchell Starc. Mayank Agarwal (17 off 40 balls), his opening partner, did the hard work in the first hour, but then got an in-dipper from Pat Cummins that cut back sharply and breached through his defences.

Giving Pujara company was skipper Virat Kohli (batting on 5 off 22 balls) when the dinner break was taken at the completion of 25 overs. The Australian pace troika of Starc (1/17 in 8 overs), Josh Hazlewood (0/16 in 9 overs) and Cummins (1/3 in 6 overs) bowled a very steady line, comprising mostly fuller deliveries, but to the credit of the unbeaten Indian duo, they did not look very jittery.

At the start, it was another disappointing mode of dismissal for Shaw, who, according to many, was a rather surprising selection over the in-form Shubman Gill. IMAGE: Pat Cummins celebrates on his follow through after taking the wicket of Mayank Agarwal. Photograph: Ryan Pierse/Getty Images

Starc bowled a full delivery, which slightly shaped in, and the opener, having faced one ball, went for an expansive drive, playing away from his body, only to drag it back onto the stumps.

Pujara seemed like starting from where he had left during the tour of 2018 as he defended and only jabbed the drivable balls in his area. He was a bit adventurous as he found India's first boundary with a cover drive off Hazlewood. An uppish square drive off Starc got him a second one.

But Cummins produced one that was fast and moved off the track and Agarwal was beaten for pace. Replays showed that the batsman did not even complete landing on his front-foot.

When the ball clipped the off-bail, Agarwal was on his left heel.

Such was the pressure created by the Australian pace attack that Pujara played an astounding 34 consecutive dot balls being stuck on 14.

Cheteshwar Pujara's ultra-defensive approach became his own undoing as India crawled to 107 for 3 at tea after being choked for runs by an inspired Australia on the opening day of the first Day/Night Test, in Adelaide, on Thursday.

So intent was Pujara (43 off 160 balls) on blocking anything and leaving everything for the better part of his innings, that a 68-run stand for the third wicket with skipper Virat Kohli (39 batting off 111 balls) couldn't release the pressure going into the second break of the evening. Not often does one find a batsman taking 148 balls to score a boundary and it became a battle of attrition between Pujara and star spinner Nathan Lyon (1/29 in 12 overs) during the post-dinner session.

It made for a fascinating hour of Test cricket, a throwback to the good old days when batsmen would plonk their front-foot with a big stride forward and use their pads as the first line of defence. He did hit Lyon for a couple of boundaries trying to break the shackles but then came a classical off-break which had both turn and bounce and the bat-pad fielder Marnus Labuschagne, at leg-gully, lunged forward to take an easy catch. 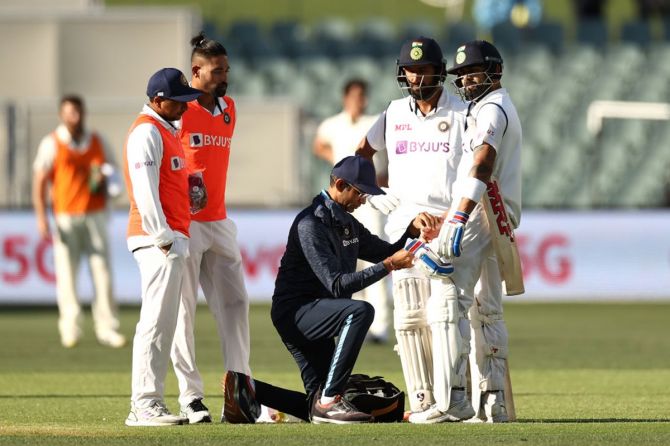 IMAGE: Cheteshwar Pujara watches as Virat Kohli receives medical attention after being hit on the hand by a delivery from Mitchell Starc. Photograph: Ryan Pierse/Getty Images

While the art of defensive batting was a fantastic advertisement of top quality Test cricket, it can't be denied that Pujara's dogged approach did make Kohli also go into his shell as a run-rate of 1.94 in 55 overs would suggest.

When Pujara used more pads against Lyon, Kohli played the copybook forward defence, presenting his bat first. When an opportunity came along, he punched over Lyon's head for a boundary.

Similarly, a whip through mid-wicket off Mitchell Starc or rolling the wrists to keep a pull-shot down were signature Kohli. Why Australia have advantage going into pink-ball Test 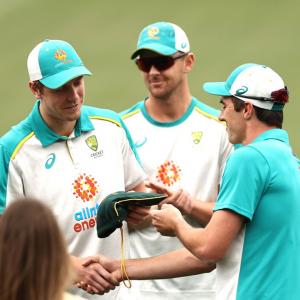