News
Business
Movies
Sports
Cricket
Get Ahead
Money Tips
Shopping
Sign in  |  Create a Rediffmail account
Rediff.com  » Cricket » If it was not for Pandya...

Purnendu Maji and Srinivas Bhogle list the Most Valuable Players during the India-Australia ODI series. With two consecutive centuries, and among the fastest ever scored in ODI cricket, it isn't a surprise that Steve Smith is the Most Valuable Player of the Australia-India ODI series.

Smith has a MVPI of 302, which means that he contributed a 'run equivalent' of 302 to his Australian team.

Glenn Maxwell with an explosive strike rate of nearly 200, and also a wicket, is second with an MVPI of 277.

Hardik Pandya (MVPI of 267) is the only one Indian in the top five.

There are only 4 Indians in the top ten, which suggests that it was very much Australia's ODI series (a 3-0 was on the cards till Jasprit Bumrah dismissed Maxwell in the third ODI on Wednesday).

For India there was not much else to be happy about.

Virat Kohli (180) got two half-centuries, which is below par for the world's best ODI batsman, and while Ravindra Jadeja batted better than usual, he didn't bowl quite as well.

Bumrah bowled more like himself in the final game, but Yuzvendra Chahal (MVPI of -14) didn't even look like a shadow of his real self. Most Valuable Players of the Australia-India series 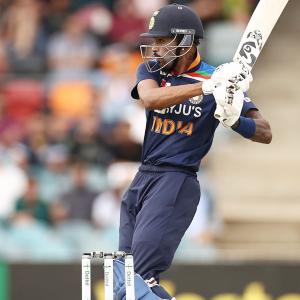