'We have got quite a few days before our next home game. If he's not available I don't see any issues. Bhuvi will lead our side since he's is our vice-captain'

Williamson had suffered the injury during New Zealand's second Test against Bangladesh. He joined the Hyderabad side along with Martin Guptill on Friday night.

"It's not a long term injury, whether he plays, we will take a call tomorrow," Moody said on the eve of the match.

"We have got quite a few days before our next home game. If he's not available I don't see any issues. Bhuvi (Bhuvneshwar Kumar) will lead our side since he's is our vice-captain."

SRH play their second match at home against Rajasthan Royals on March 29.

Williamson had guided Sunrisers Hyderabad to a runners-up finish after being appointed skipper last season following David Warner's withdrawal due to the ball-tampering scandal.

Warner has returned to the franchise this season but SRH have retained Williamson as the skipper.

"Kane is obviously the standing International captain who is admired globally on that platform and what he did with us last year, we felt that it seemed to make sense to continue that continuity," Moody said.

"Leadership comes in many different fashions and Davey (Warner) still has a leadership role within the group. In the middle with bat in hand and around training and out in the middle when it comes to strategy from over to over. We just felt there was no need to make any change from last year." 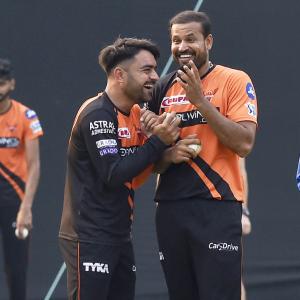 How Muralitharan is aiding Pathan's bowling