Mitchell Starc has backed the seventh-ranked team to gel quickly for the Super 12 campaign which starts October 23 against South Africa in Abu Dhabi.

'We have all played enough cricket to know what we need to do to best prepare ourselves for these sorts of tournaments.'

Australia insist history counts for nothing when it comes to their chances of winning a first Twenty20 World Cup but dire individual and team form in the lead-up suggests the title will again prove elusive.

Captain Aaron Finch has a massive task to rally a squad short on match fitness and featuring a slew of senior players who declined to tour this year, citing bubble fatigue and welfare issues amid the COVID-19 pandemic.

Their last series win came against South Africa in February 2020, before the COVID-19 pandemic shut down the sport for a few months.

Players who had hoped to find form in the Indian Premier League have struggled, with opener David Warner dropped by Sunrisers Hyderabad and Steve Smith barely sighted for Delhi Capitals after the tournament's resumption in the Middle East.

Opener Finch heads into the tournament after a long recovery from knee surgery, while all-rounder Marcus Stoinis has struggled with a hamstring strain.

The dressing room may be tense after discontent with Justin Langer's hard-nosed coaching style leaked into the public domain, prompting urgent meetings between senior players and officials to clear the air.

It all amounts to a big ask to advance beyond a group featuring top-ranked England and twice champions West Indies.

However, fast bowler Mitchell Starc has backed the seventh-ranked team to gel quickly for the Super 12 campaign which starts October 23 against South Africa in Abu Dhabi.

"I am feeling good about it," he said over the weekend.

"We have all played enough cricket to know what we need to do to best prepare ourselves for these sorts of tournaments."

For all the queries, Australia are not short of quality when at full strength. All-rounder Glenn Maxwell and paceman Josh Hazlewood provided timely reminders of that during the IPL.

Much rests on the shoulders of Warner and Finch to set a platform for the middle order, who draw confidence when the team's senior openers are on song but struggle when they fail.

Some Australian batsmen are nervous against spin and can expect to face plenty of it on the Emirati pitches.

Australia will feel more confident in their attack, with spinners Ashton Agar and Adam Zampa ranked among the International Cricket Council's top 10 T20 bowlers and reliable wicket-takers during the middle overs.

Australia's best performance at the World Cup was their runner-up effort at the 2010 tournament won by England, an anomaly in a largely underwhelming record.

Matching that will require a lot from a squad that has barely played with each other, let alone played well.

© Copyright 2022 Reuters Limited. All rights reserved. Republication or redistribution of Reuters content, including by framing or similar means, is expressly prohibited without the prior written consent of Reuters. Reuters shall not be liable for any errors or delays in the content, or for any actions taken in reliance thereon.
Related News: Australia, Aaron Finch, Mitchell Starc, Glenn Maxwell, South Africa
COMMENT
Print this article 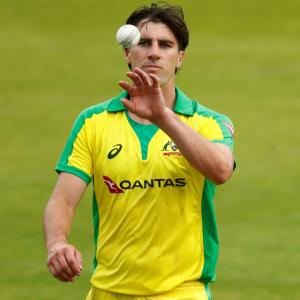