Pakistan batting consultant Matthew Hayden on Thursday said that the T20 World Cup clash between arch-rivals India and Pakistan will be a 'dogfight', and one team would not run away with the game.

India will open its T20 World Cup campaign against Pakistan on October 24 in Dubai. "One side is not going to run away with the game here. It's a dogfight. The conditions and margins for error will be very little. And so, good leadership will be the key. Babar commands that presence and commands that role. In the batting sense as well, he is the premium player. He will be targeted," said Hayden during a virtual press conference on Thursday.

"He will be the person who every player would want to put in his pockets. There will be pressure on him both as a captain and as a batsman. But I sense that the way he will go about with it will be spot on," he added.

Talking about the rivalry between India and Pakistan, Hayden said: "Nothing that I have ever seen through the various elements of our game ever matches the rivalry of India and Pakistan. There is an obvious pressure much like the pressure that's there when you play against England for Australia. But the pressure is only as much as you allow it to be. Your preparation is there, your experience is there, your opportunity now becomes a history-making opportunity."

Ahead of the T20 World Cup, Hayden was appointed as Pakistan's batting consultant while former Protea’s pacer Vernon Philander was roped in as bowling consultant.

"I would have never thought in my wildest dream that I would be sitting inside the Pakistan dressing room," said Hayden.

India won its both warm-up games ahead of the T20 World Cup. The Men in Blue defeated England by seven wickets while the side registered an eight-wicket triumph over Australia 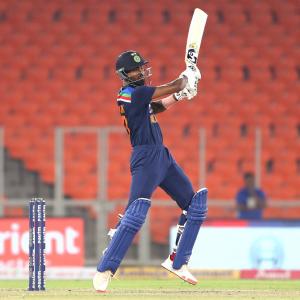