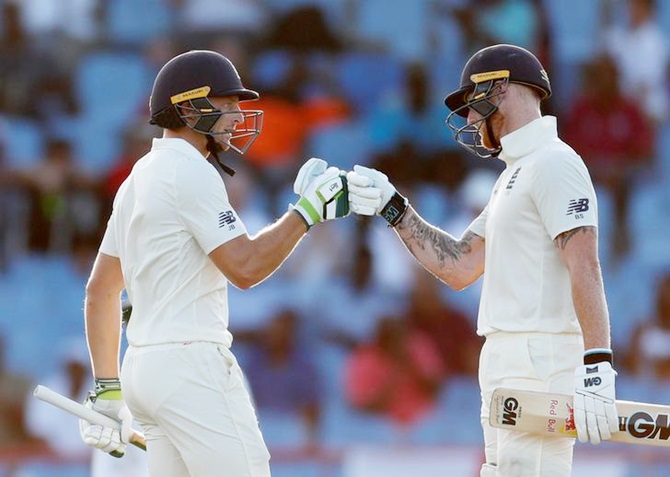 IMAGE: England's Jos Buttler celebrates his half century with Ben Stokes during Day 1 of the third Test against the West Indies, at the Darren Sammy National Cricket Stadium, in St Lucia, on Saturday. Photograph: Paul Childs/Reuters

Ben Stokes and Jos Buttler compiled an unbeaten fifth-wicket stand of 124 to guide England to 231 for four at the close on Day 1 of the third Test against the West Indies in St Lucia.

Stokes enjoyed a most unusual reprieve when he was caught-and-bowled for 52 by Alzarri Joseph, who snaffled a sharp chance as the ball cannoned towards his midriff.

After trudging from the oval at the Darren Sammy Stadium in Gros Islet, Stokes was removing his protective equipment when the third umpire declared that Joseph had delivered a no-ball after reviewing the footage.

Number seven Jonny Bairstow, already in the middle, made a quick u-turn and exited as Stokes returned to rousing cheers from the England fans.

Buttler was dropped in the slips before he had scored, and he and Stokes rode their luck at times early but looked more poised as the day progressed, and they dug their team out of a big early hole. 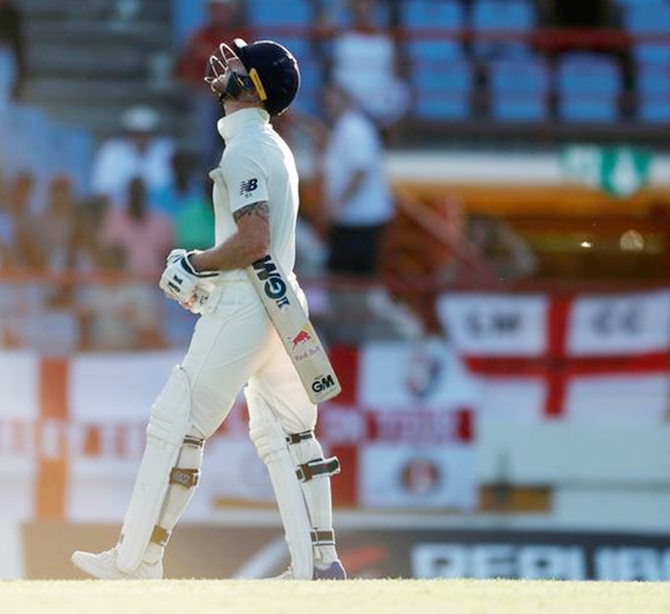 IMAGE: England's Ben Stokes leaves the pitch before returning after he is given not out. Photograph: Paul Childs/Reuters

Buttler was unbeaten on 67 and Stokes on 62 as England took the upper hand for the first time in the series, which they have already lost after defeats in the first two Tests.

But it was not all smooth sailing for the visitors, whose top-order problems were starkly evident again.

Keemo Paul, drafted into the team in place of suspended captain Jason Holder, took a wicket with his first ball when England opener Keaton Jennings edged to first slip. He was out for eight off what was little more than a loosener from Paul.

The 20-year-old, in his third Test, was the pick of the four-pronged West Indies pace attack and beat the batsmen regularly.

After getting Jennings, he also snared the other opener, Rory Burns, for 29 when the opener was trapped lbw.

The on-field umpire adjudged Burns not out, but a West Indies review showed the ball would have hit the middle stump and the decision was overturned.

Paul finished the day with 2-42, while Shannon Gabriel bowled with genuine pace, clocked several times at more than 90 miles-per-hour (145 kph).

England captain Joe Root (15) was out cheaply for the fifth time in as many innings this series, caught-behind off a poor Joseph ball that was not far from being a wide.