The upcoming white-ball rubber against Bangladesh will be "a more practical journey" towards next year's World Cup in India, stand-in captain Shikhar Dhawan said after his team's series defeat to New Zealand in Christchurch on Wednesday.

India lost the three-match ODI series 0-1 after rain washed out the third and final game. The visitors could have lost the series by a bigger margin as chasing 220, New Zealand were cruising at 104/1 in 18 overs, 50 runs ahead of the Duckworth-Lewis par score, when rain interrupted the game yet again in the white-ball rubber.

"In Bangladesh, all senior players will be back. That will be a more practical journey towards the World Cup," Dhawan said after the match.

"All the seniors are going to be back in the side. More Asian wickets is a more practical journey to the World Cup for us."

New Zealand, needing just 116 runs from as many as 32 overs, had to be content with a 'no result' as the game was two overs short to be technically called complete.

Asked about the juniors in the side, Dhawan said, "It is important to pick up the details, like where to pitch the ball and the lengths. We are a young unit, and they must have learnt about bowling in the good-length areas. We were on the shorter side."

"Also, taking the partnerships deep, especially when it's overcast."

While only two games produced results in the composite six-match white-ball series in New Zealand owing to rain, Dhawan hoped that the weather will be better in Bangladesh.

"(It is) important to get the small things right, right lengths for the bowlers, batting close to the body in these conditions for the batters. These are the learnings (from the New Zealand tour)."

New Zealand skipper Kane Williamson stood out with his captaincy and cleverly rotated his bowlers.

"When we have been playing cricket, we have been applying ourselves. Some good stuff in the rained-off games too. We knew that 20 overs would constitute a match, but we could see the weather coming, it has been following us," Williamson said.

"Daryl (Mitchell, 3/25) has been hanging out for a bowl for ages. Adam Milne (3/57) felt a niggle but didn't want to stop. Focus changes to the Test arena. Guys get a break now and that's important too. Been pretty busy. We will regroup as a Test team after the break." 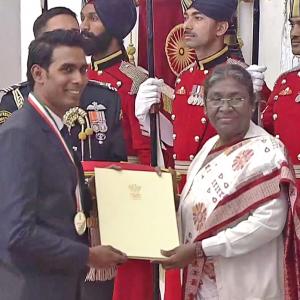 'LGBTQ community can visit Qatar, but...'