'Siraj has come a long way; he is probably in the best head space he has been as a bowler.' 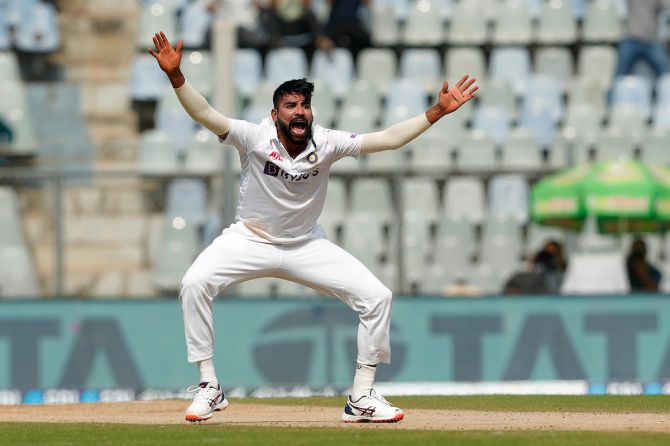 IMAGE: India pacer Mohammed Siraj appeals for leg before wicket against New Zealand's Henry Nicholls during Day 2 of the second Test, at the Wankhede Stadium in Mumbai. Photograph: BCCI

India Test skipper Virat Kohli was all praise for pacer Mohammed Siraj, saying his evolution is a good sign for the team heading into the South Africa tour.

Siraj was able to get bite and purchase from the Wankhede wicket while the other seamers were unable to make an impact in the just-concluded second Test against New Zealand in Mumbai.

"Siraj has come a long way; he is someone who has lot of skill and talent. He puts in great effort every time he bowls. His performance is a great boost for him. We can rely on a guy like that.

"It is a great sign for any team to have a bowler like that -- who can give you key breakthroughs -- which can prove to be the difference in winning a Test match or drawing it," said Kohli, replying to a query during a virtual press conference.

"If you have a look at the Lord's Test against England, the ball stopped swinging, but he was able to get purchase of the wicket because of the skill he has.

"He has come a long way; he is probably in the best head space he has been as a bowler. It is about developing that and staying fit and be the bowler that the team wants him to be," he added.

Talking about Mayank Agarwal's performance in the second Test, Kohli said: "Great application from Mayank. To play at this level for a long period of time, he has shown great character.

"We have all gone through certain stages in our career where we have had to bring that impact performance and he has done that. This will help him in being consistent for India in the coming years; he is definitely an asset. These types of innings will certainly give him confidence."

Asked whether the team management sees Shubman Gill as a middle-order option, Kohli said: "Well, that is a discussion that needs to take place… on who we think are specialists for certain positions. These are things I cannot sit here and answer. You need to have discussions and analyse what is best for the team and the individual."

Agarwal's heroics with the bat and Jayant Yadav's four-wicket haul in the second innings helped India defeat New Zealand by 372 runs in the second Test.

With this win, India sealed the two-match series 1-0 and now Virat Kohli's side will head to South Africa for three Tests and three ODIs, beginning December 26. 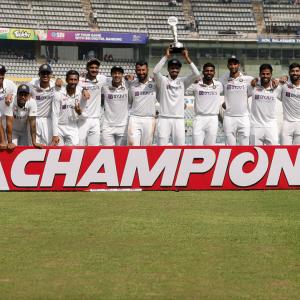 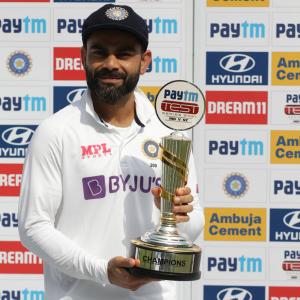