News
Business
Movies
Sports
Cricket
Get Ahead
Money Tips
Shopping
Sign in  |  Create a Rediffmail account
Rediff.com  » Cricket » BCCI will not push for axing of Super Kings and Royals from IPL 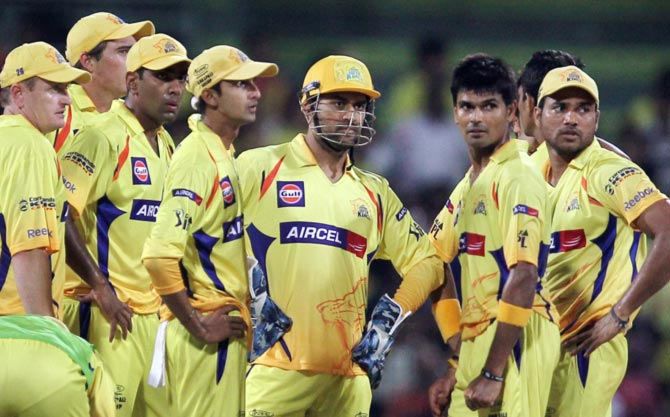 The two troubled Indian Premier League franchises, Chennai Super Kings and Rajasthan Royals, can breathe easy as members of the Board may not push for their termination at the Working Committee meeting to be chaired by newly appointed President Shashank Manohar in Mumbai on Sunday.

"The agenda of this upcoming Working Committee meeting is same as it was for the one that was called off in Kolkata, last August. The main thing on the agenda will be discussion on the IPL Working Group's report about the way forward for IPL-9. As of now, there is little or you can say no chance of termination for Chennai Super Kings and Rajasthan Royals," a top BCCI and IPL Governing Council member said on Friday.

The IPL Working Group had suggested fresh bidding for two new teams to make it an eight-team league, which is a must from the perspective of broadcasters and sponsors.

It was also suggested that after the Super Kings and Royals complete their two-year suspension period as per the Supreme Court- appointed Lodha Committee's verdict, they will be re-inducted into the cash-rich league to make it a 10-team affair.

"Since we had decided to implement Lodha Committee's report in toto, we don't find any need to supercede them and decide on a fresh quantum of punishment," the official said.

Tamil Nadu Cricket Association (TNCA) is likely to be represented by PS Raman in the meeting, which will also discuss Pepsi's intent to pull out as title sponsor of the IPL. N Srinivasan will stay away from the meeting.

The meeting, which will be the final working committee meet, will see annual accounts passed and the date of the Annual General Meeting decided.

BCCI president Manohar has already said that the Board will not be vindictive towards any of its member.

After BCCI president's declaration, Srinivasan withdrew the perjury case filed against secretary Anurag Thakur while the Board is still represented at the ICC Board meetings by the Tamil Nadu strongman.