‘I should have had a look at it. At that stage, with the slog on, you hope the fielders are switched on.’ 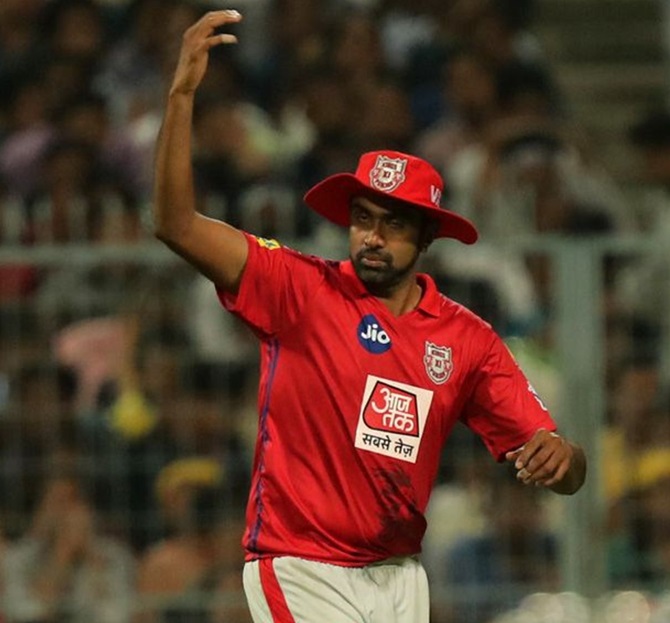 IMAGE: Ravichandran Ashwin failed to notice that there was one fielder short of the mandatory four inside the 30-yard circle. Photograph: IPL T20

Kings XI Punjab skipper Ravichandran Ashwin Wednesday said he would take the blame for the no-ball incident against Kings XI Punjab which cost his side the IPL match in Kolkata on Wednesday.

KKR's Andre Russell was yorked by Mohammed Shami off the last delivery of the 17th over. The Jamaican batsman was on three then but to the horror of KXIP, the umpire signalled a no-ball as the visiting team was found to have one fielder short of the mandatory four inside the 30-yard circle.

Russell made full use of the reprieve as he hammered five sixes and three fours from the next 11 balls he faced to bludgeon his way to a 17-ball 48, helping KKR to post a massive 218 for 4.

KKR scored 56 runs off 19 balls after the no-ball incident to post their highest IPL total at the Eden Gardens.

Asked about the game-changing no-ball incident at the post-match presentation, Ashwin, who was at the centre of the 'Mankading' controversy against Rajasthan Royals two days back, said as captain of the team he would take the blame.

"We weren't really focussed on the small things and they do cost you big in this format. Yes, we definitely have to look at it next game. I'll take the blame (for the no-ball incident)," Ashwin said.

"I should have had a look at it. At that stage, with the slog on, you hope the fielders are switched on but obviously he (Varun Chakravarthy or Hardus Viljoen) was a debutant," he added.

It was not immediately clear as to who Ashwin was referring to as both Varun Chakravarthy and Hardus Viljoen were making their IPL debuts on Wednesday.

Russell, on the other hand, thanked the KXIP player who was outside the 30-yard-circle for ensuring the no-ball.

"Thanks to that guy who was outside the ring. It's the new guy, forgot his name. Thank you. When I get bowled, I thought I had missed out but I saw the guys in dug out signalling no-ball and I was like, please God, let it be a no-ball. I did not let it go and capitalised on it," said the big-hitting Jamaican, who was adjudged man of the match for the consecutive time.

"Keep getting cars and these awards. I'll have to make a bigger garage."

The 30-year-old Russell won the much-anticipated contest against compatriot Chris Gayle on Wednesday but said the 'Universe Boss' is still a bigger hitter of the ball. Russell took the wicket of Gayle, who scored just 20 off 13 balls.

"Gayle is like a brother to me. A legend and to get him out early in the first six is big. The plan was to restrict him as best as possible. Today, I hit some big ones but he (Gayle) is still the bigger hitter," said Russell. 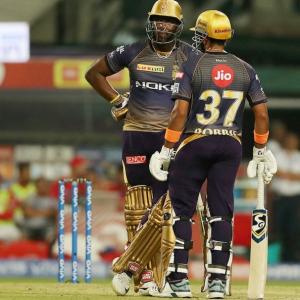