'Always knew Tewatia would get IPL stardom with batting'

'His advantage was his batting which was in a different league. I told him that you can win an IPL game with this batting.' 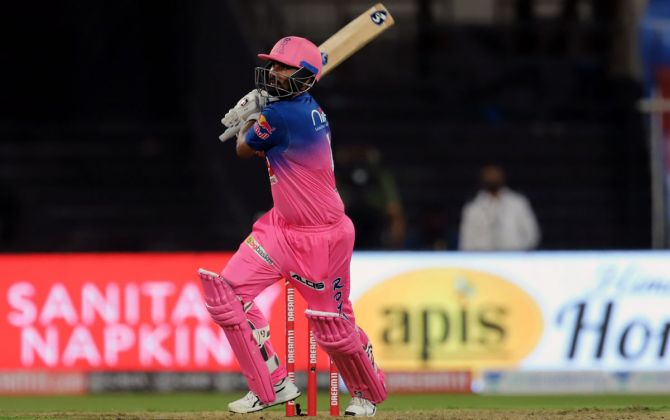 Rahul Tewatia was always destined to achieve stardom in the Indian Premier League because of his swashbuckling batting, says his childhood coach Vijay Yadav, after watching his ward's exploits with the bat for Rajasthan Royals, in the IPL match against Kings XI Punjab, in Sharjah, on Sunday.

"I always told Rahul that he will have his day in the IPL and it would be because of his batting," the excitement and satisfaction was palpable in Yadav's voice while talking about Tewatia's match-defining 31-ball 53 for Rajasthan Royals.

IPL throws up unlikely stars and Sunday was a "day of Rahuls" when the lesser known Tewatia from Haryana's Sihi village in Faridabad district stole the thunder from the uber cool India star KL Rahul, striking five sixes in an over from Sheldon Cottrell that changed the course of RR's match against Kings XI Punjab.

And icing on the cake was Royals Brand Ambassador Shane Warne's praise.

"Firstly what courage and heart shown by Tewatia, especially after his poor start with bat, well done young man awesome," Warne summed it up in a tweet that Tewatia would remember for a long time.

Haryana has had a tradition of producing leg-spinners and Tewatia followed in the footsteps his much illustrious colleagues Amit Mishra and Yuzvendra Chahal despite being in their shadows for the better part of the last seven years in senior cricket.

But Yadav, a former hard-hitting India wicketkeeper-batsman (best known for advising Sachin Tendulkar to bowl the last over in the Hero Cup semi-final against South Africa), remembers a shy kid who came at his "Cricket Gurukul" in 1998-99 as an eight-year old.

"His father is a lawyer in a Faridabad court and they are a middle-class family. But what struck me was his family's enthusiasm even though he was a shy kid," Yadav fondly remembers.

"Not just his father but his uncles would also come to drop him and they were like any aspiring parent if their kid didn't get a chance to bat or bowl. 'Sir kya kar rahein hain, Rahul ko khilate kyun nahi' (Sir, what are you doing? Why are you not playing Rahul?)," Yadav remembers.

"It was like the whole family wanted to make him a cricketer."

In fact, Tewatia's career ran parallel with Chahal as they played Under-15s and Under-19s together.

"A player must be aware about his strengths and when Rahul was in his teens, he was always competing with Chahal, I made him aware about a few things," Yadav said.

What was his Guru Mantra?

"Simple. I told him he will be a useful leg-spinner but Amit and Chahal are more skillful bowlers. His advantage was his batting which was in a different league. I told him that you can win an IPL game with this batting," said Yadav, who has been India 'A' fielding coach in the past.

"I told him that white ball was his calling and at the National Under-22, he scored 90 plus on debut in Raipur. He is an asset as a batting all-rounder," Yadav said.

Even during lockdown, Tewatia, along with Uttar Pradesh and Kolkata Knight Riders player Rinku Singh, would come for nets at his academy and the balls would land on the road when it hit the middle of his bat.

"I am not surprised he hit five sixes in an over. He is capable of doing that Remember his first stint in IPL with Kings XI Punjab, when he got two games. He showed glimpses," explained Yadav.

Sachin Tendulkar termed Tewatia's knock as "terrific" while expressing his surprise at why Kings XI bowlers "didn't bowl yorkers" at the death.

Yadav, who once played a cameo in South Africa to win an ODI during India's first tour to the country in 1992-93, is realistic about what Tewatia can achieve.

"Just know one thing. All Haryana players in recent years have got India opportunities when they deserved whether it's Jogi (Joginder Sharma), Mohit (Sharma), Yuzi (Yuzvendra Chahal) or Jayant (Yadav).

"Rahul should back his strength which is white-ball cricket. I am not saying he won't play red ball regularly but white ball is his calling." 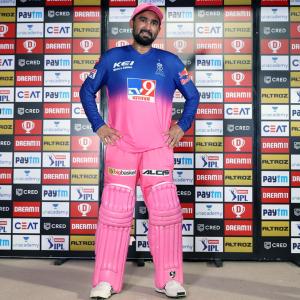 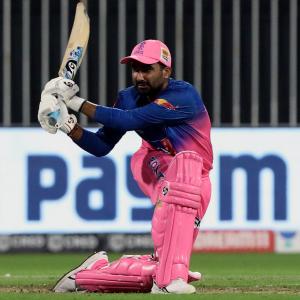