News
Business
Movies
Sports
Cricket
Get Ahead
Money Tips
Shopping
Sign in  |  Create a Rediffmail account
Rediff.com  » Cricket » 'Every game of cricket is challenging, every series is challenging'

'When cricketers, coaches, captains, managers, franchise owners focus on the prize, they forget the process.'
'You can't win every game. Getting better is all about making mistakes.'

"One of the challenges of being a match official in any sport is handling pressure, the expectation that people are going to want to influence you to give a decision their way, whether that is through the strength of appeal or getting in really tight and being in your face," Simon Taufel, five-time ICC Umpire of Year, tells Rediff.com's Norma Godinho in the concluding segment of a two-part interview.

Do cash-rich T20 Leagues add to the pressure to perform because of the money that comes with it?

Look, you are again there focussing on the outcome.

If you focus on the bank account, if you are focussing on pay day then you are putting more pressure on yourself.

Again, that is where we complicate stuff.

In my book, I talk about focussing on the process, keeping a very clear mind, staying in the present.

I know that sounds a cliche, but at the end of the day, that is all you can do.

When cricketers, coaches, captains, managers, franchise owners focus on the prize, they forget the process.

You can't win every game. Getting better is all about making mistakes.

As a cricket umpire, people want you to be perfect and then get better.

That is not possible.

You can't win every game.

You learn by making mistakes. Sometimes we are not patient enough with ourselves to realise that we've got to pay the price for a mistake, learn from that and get better. Australian Glen Maxwell, his compatriots Nic Maddinson and Will Pucovski have taken a break from the game to take care of their mental well-being.
What is your take on it? Do umpires have those moments?

There is a chapter in my book which says pressure can create a diamond or it can burst a pipe.

You need that kind of pressure to show yourself that you care.

Now, too much pressure will burst that pipe.

And in the book I talk about how we can try to manage pressure.

There are two types of pressures, external and internal.

When we care about what other people think, we put too much pressure on ourselves.

When we care about what we think and what we expect, we put a lot of pressure on ourselves.

In the book I offer some tips about how to manage pressure a bit better or how to cope with that type of pressure.

But that takes a lot of practice, and sometimes, being humans, it gets too much for us.

Now, I've seen over my career, some players like Marcus Trescothick, Jonathan Trott and also umpires like Mark Benson, the pressure got quite a lot and it affected them in a negative way.

It does appear that Glenn has shown some very good self-awareness, he's shown that courage, where he is trying to be himself, being authentic and saying 'Hey, I've got a problem'.

He's made a courageous decision to pull himself out of the game and try to regather his thoughts, to take a step back, take some time out because he's played a lot of cricket.

Sometimes, we look at health as being very physical, but we all know very much that our mental health is just as important.

We live in an age where youth suicide is on the rise, where a lot of young people are feeling the pressure from their parents about success and about jobs and what that looks like.

We need to really sort of back off a little bit, we need to stop and breathe and whenever you are under pressure on the field, one of the techniques I talk about is breathing, focussing on what you gotta just do.

But sometimes life gets complicated because just like a cricket game, the game's simple.

But sometimes we over-complicate it by thinking too much.

And we've got to try and just realise it's a game, put it in perspective, get some context.

Sometimes as players or umpires, we do overcomplicate the game and we do let a lot of those pressures come in.

I'm really pleased to see that Glenn's had that self-awareness, applied that courage, just to pull back a bit, say 'You know what, it's just a game, I'm going to look after my health, I'm going to regather my thoughts, come back stronger'.

I hope he does and I'm sure he will. 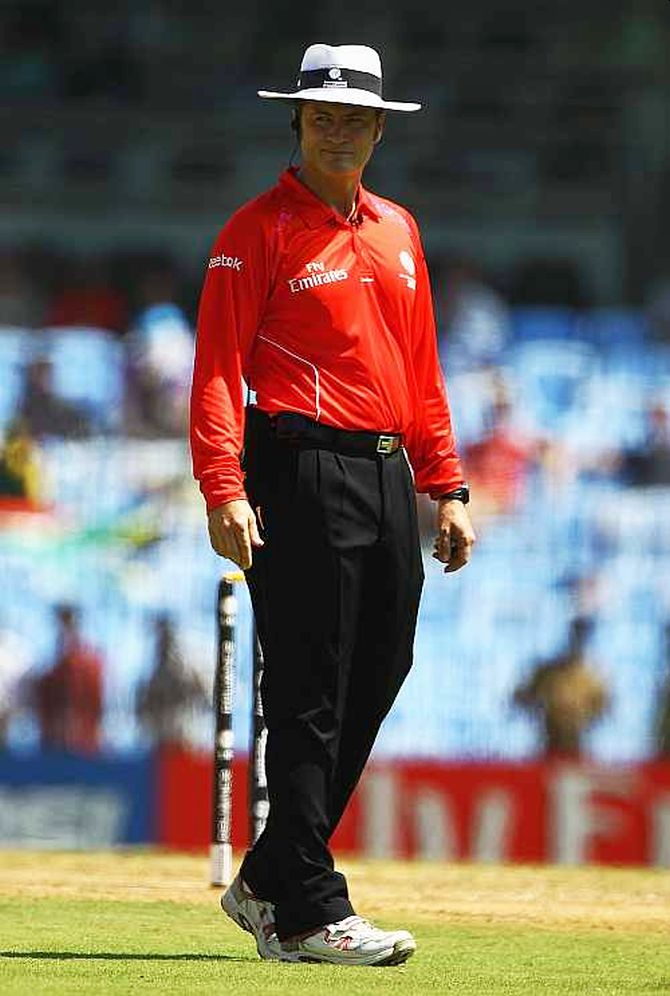 IMAGE: 'As a cricket umpire, people want you to be perfect and then get better. That is not possible,' says Simon Taufel. 'You learn by making mistakes.' Photograph: Matthew Lewis/Getty Images

Were you ever intimidated by any player, in the sense that if you made a wrong decision against them, did they come after you?

One of the challenges of being a match official in any sport is handling that pressure, the expectation that people are going to want to influence you to give a decision their way, whether that is through the strength of an appeal or getting in really tight and being in your face.

But I don't mind how much a player asks and how much they appeal, in terms of the strength of the appeal, but as long as I say not out, they respect the answer.

And for me, if I'm going to start officiating by the strength of an appeal, then I've lost it.

The strength of your appeal should not matter.

Now we've been lucky in our time to see some great appealers. Shane Warne. Greg Mathews for me was one. Geoff Lawson was passionate in a way that he appealed.

Muthiah Muralitharan, Harbhajan Singh, Anil Kumble. Some great appealers and that is who they are.

You just block it out, you focus on the ball, the pads, the bat.

You focus on your game; they'll do what they are going to do.

I remember doing an India-Pakistan game in Bangalore. It was a close match and the result was not too far away. I remember answering an appeal not out to Pakistan. I didn't realise it at the time, but Inzamam (-ul Haq)'s come from mid-off and he's finished up right next to me!

I remember finishing answering the appeal and I realised 'Oh, where did you come from?'

But you're not allowed to charge towards an umpire in an aggressive manner, which is exactly what Inzi did. And so at the end of the day, after the game, we charged him with breaching the ICC's behaviour code in that respect.

But at the time I was blissfully unaware he was appealing in that way because I was focused on what I had to watch.

Which was your most challenging series and why?

There is a reasonable amount of travel involved in a different time zone.

And so it really tests a lot of both, you personally, off the field at adapting to a different environment, and also on the field, adapting to all of your umpiring skills that you have to employ.

So, when you put all those things together you really need to be on top of your game to do well.

So, for me, if I see an umpire do well in Sri Lanka, I think, well, they are a very good umpire. IMAGE: Australia's Cameron Bancroft and Steve Smith have a chat with the umpires on Day 3 of the third Test in Cape Town after being caught for ball tampering. The duo, along with team-mate David Warner, were subsequently handed 12-month bans for their roles in the scandal. Photograph: Ashley Vlotman/Gallo Images/Getty Images

How easy or tough is it for an umpire to notice that the ball has been roughed up?

Again, it comes down to experience.

Being around the game for a long period of time, you talk to other umpires, you see what's going on in their games.

You look at examples of when umpires have reported ball tampering and you look at what the condition of the ball is like.

But it's one of those things that it's funny, you've got to be sure.

You do have to be certain and it's important that you don't falsely accuse players, teams, etc.

But again, as you go through your career, and you build that experience and you know what to look for, it's one thing that you become good at.

And that is why, it does help having played the game to understand what things might look like with quarter seams or the seam or what marks on the ball would like.

And for those people who don't know what goes on, you might be interested to know that when the ball does go into the crowd or outside of the boundary and then the umpire gets it back, they look at the ball to make sure that if there's any funny marks on the ball after it's gone into the grand stand, that they are not going to confuse any marks on the ball with something that might have happened with the fielding team.

So, we try to make sure that we keep a very close look an eye on the ball and if something untoward happens then we know it's not normal play, it's come from somewhere else.

Do you think the ban on the David Warner, Steve Smith and Cameron Bancroft for their roles in the ball-tampering saga was appropriate?

Look, it's not for me to say whether the penalty was appropriate for what happened in Cape Town.

They very well know and every player knows... We have seen recently a case in the West Indies-Afghanistan series where a player (Nicholas Pooran) has been suspended for tampering or doing something with the ball they should not.

The players know, it's very clear about what should happen and in this age of high definition broadcasting, in this age of having 30-odd cameras at a game, if you do the wrong thing, chances are you'll be found out. 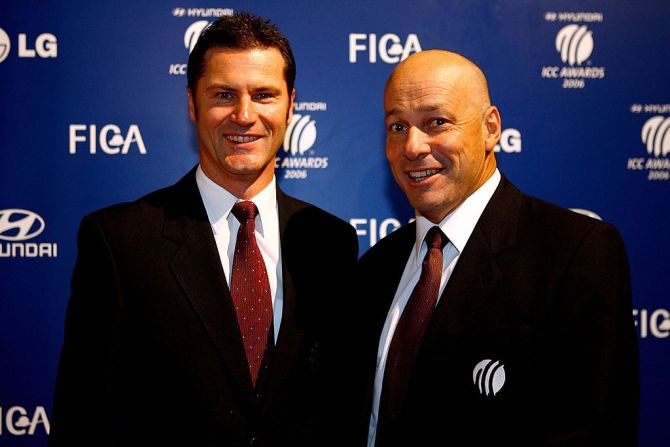 IMAGE: Umpires Simon Taufel, left, and Darryl Harper. In his book, Taufel says Harper taught him to embrace local culture through the cities they toured on the job. Photograph: Clive Mason/Getty Images

What keeps you busy now, what are you involved in?

I started a business 12 months ago called Integrities, Values, Leadership with two other partners.

Our endeavour is around behaviour strategy and training and development.

We've all worked in sport for 30-odd years, particularly in elite sport.

We are trying to take those lessons, those style of learning, shifting behaviour, improving what we do and take it to other groups of people, whether that be sporting teams, or official teams, corporate teams, captains of industries; How do we improve leadership, how do we improve culture, how do we shift people towards achieving their potential, unlocking that, how do we get them unstuck.

So, we work together in that space.

I do a bit of match refereeing duties for the Caribbean Premier League.

Six weeks in the Windies is always enjoyable.

I'm trying to spend more time at home with my family, watch my kids grow up, allow my wife space to be able to follow her career path.

And writing the book was a bit different.

It was nice to be back in India, for a few weeks, connecting back with the cricketing public, and enjoy your passion for the game. 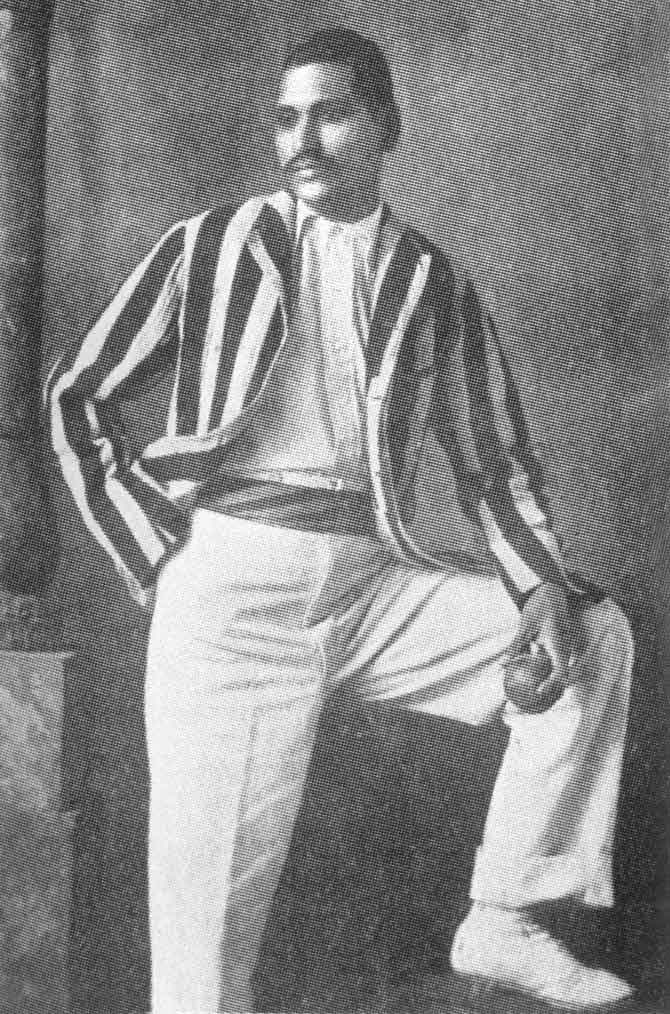