News
Business
Movies
Sports
Cricket
Get Ahead
Money Tips
Shopping
Sign in  |  Create a Rediffmail account
Rediff.com  » Business » Will Raghuram Rajan be our next finance minister?

There were two questions everyone wanted to know the answer to.
1. Did Raghuram Rajan advise the Congress on the much-discussed NYAY scheme, as claimed by Rahul Gandhi?
2. Will Raghuram Rajan become India's next finance minister? 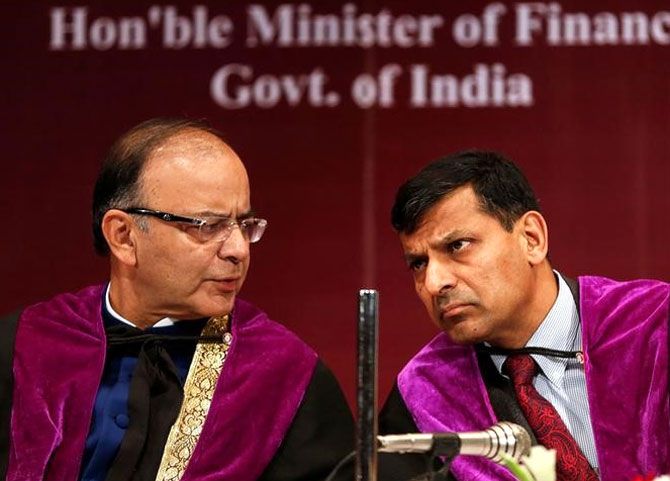 At the Mumbai launch of his latest book, The Third Pillar: How Markets And States Leave The Community Behind, on March 27 -- the day Prime Minister Narendra Damodardas Modi made the Mission Shakti announcement -- there were two questions everyone wanted to know the answer to.

1. Did Raghuram Rajan advise the Congress on the much-discussed NYAY scheme, as claimed by Rahul Gandhi?

After some embarrassed laughter and a little bit of dithering and hedging -- the event was hosted by his publishers, HarperCollins India, and Literature Live! at NCPA's Experimental Theatre -- Raghuram Rajan answered one of those questions.

To find out which one, watch Hitesh Harisinghani/Rediff.com's videos below:

He then moved on to "the single most important question on people's minds, jobs".

"You have to create jobs that people need. At the same time, you have to create the capacity for people to get to those jobs," he said as he answered Shereen Bhan, managing editor, CNBC-TV 18.

"If people don't have basic access to education, how will they become capable for those jobs?"

There were a few other tasks, he said, that India urgently needed to take on in order to get out of the economic rut it is stuck in.

Off and on, the suggestion of taxing the super-rich in order to uplift the very poor keeps popping up?

Raghuram Rajan is not really a fan of the idea.

He has an alternate suggestion and some advice for the next government.

A big problem with the Indian economy, he says, is that "we continue to rely too much on the bureaucracy to do too many things.

"There are too many areas that the State is in where the private sector can do very well.

"Unless we truly unleash the private sector, we are not going to move that far and that fast."

And yes, he says, there is one more thing India needs to " examine sooner rather than later".

Dr Rajan is excited about the idea of entrepreneurship as a solution to India's job crisis, a question he answered when the discussion was thrown open to questions from the audience.

"Entrepreneurship is going to be part of our answer to job creation. It can't be just a big private sector or the government.

"How to facilitate that has to be an important question," he says.

Two other big areas that India needs to look at, says Dr Rajan, is education and agriculture.

"Is our education system appropriate or is it failing our kids and how do we make those changes?

This event was organised by Literature Live! and HarperCollins India.