'The jobs that are being created now are the delivery boy jobs which are of extremely poor quality, or contractual jobs where you hire a person on a per piece basis.' 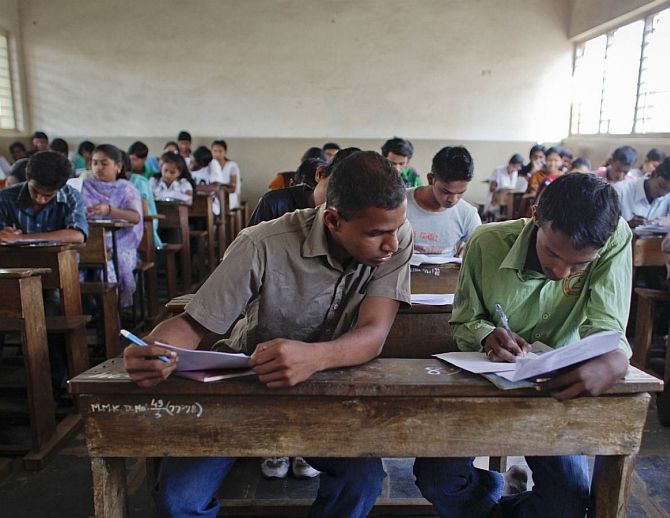 Kindly note that the image has been published only for representational purposes. Photograph: Danish Siddiqui/Reuters

The latest unemployment figures for India, released by the Mumbai-based think-tank Centre for Monitoring Indian Economy, paints a dismal picture.

Further, the labour participation rate -- that is, those above 15 years who are either employed or are actively looking for employment -- is also on the decline.

Compounding the problem is that the number of employed persons has, since September 2016, declined by a whopping 18.3 million.

All of which leads to the question: Is there a job crisis in India?

Mahesh Vyas, managing director, Centre for Monitoring Indian Economy, would not like to call it a crisis, but a very serious problem.

"The world's second largest country in terms of people does not have enough people working by world standards. That is the nature of the disease, and it is a serious ailment," Vyas tells Rediff.com's Shobha Warrier.

Is unemployment the biggest problem India faces right now? Is it a crisis?

I wouldn't call it a crisis. I would call it a very serious problem. A crisis would imply that a greater calamity or meltdown would happen because of the situation. It is insidious in nature.

We seem to suffer from this poor labour economics on a consistent and persistent basis. It doesn't seem to go away.

First, the nature of the problem needs to be understood.

India has a labour participation of less than 50% whereas the world average is 67%.

The world's second largest country in terms of people does not have enough people working by world standards.

That is the nature of the disease, and it is a serious ailment.

We have got this huge problem with which we are living with for quite some time.

There is no crisis, there is no calamity, there are no riots on the streets.

Usually, unemployment leads to social unrest, but we don't see unrest in our society...

That will happen in a country where there are formal jobs. When people like us start losing jobs left, right and centre, there would be social unrest.

People like us are not losing jobs. But young graduates don't find jobs. This is a different kind of a problem.

Will that not lead to social unrest?

There is no unrest because they are willing to wait.

In most towns in India, they keep applying for government jobs.

Till you are 30, you can continue to apply to these jobs.

If you are an SC/ST, you can apply for a few more years.

After 30, you will not cause social unrest. You take up whatever jobs you get, get married and settle down.

Many people say it is not unemployment, but under-employment that is the problem India faces. There are jobs, but not the right kind of jobs.

That is exactly what I was saying. Till 30, they try for a government job and after that, they take whatever job they get. They will continue to live with it, under-employed.

Women don't go to work because there are not enough jobs.

This is because India is not producing sufficient good quality jobs.

The jobs that are being created now are the delivery boy jobs which are of extremely poor quality, or contractual jobs where you hire a person on a per piece basis.

The nature of the situation is such that it will not cause any crisis. But it is a crisis brewing and we will probably live with it in these conditions. 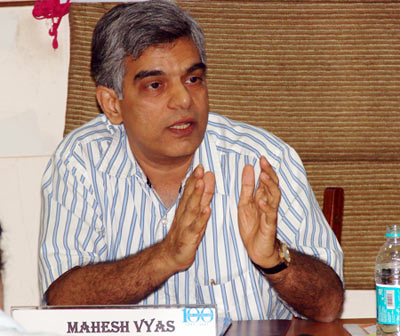 Till we realise that this is not acceptable. Today, we seem to be accepting it. We seem to be happy with what we are getting.

We have a penchant for saying we must educate ourselves. So, the blame is put on reservations for not getting a job.

We tend to put the blame on other issues and not focussing on the macro economic problems like the country is not generating good quality jobs.

This lack of recognition of the real problem is our biggest enemy.

We are willing to accept the situation as it is.

Then, there is a tremendous pressure from the intermediate castes for reservations. This is the manifestation of the problem.

Why are people asking for reservations? Because there are no jobs.

Do you think, like some experts say, unless you have land and labour reforms, India will not produce jobs?

The question is, for example, what do you mean by labour reforms?

If labour reforms means hire and fire more people, does it create more jobs? It is questionable.

No hire and fire?

You can hire and fire, but no contractual jobs, no jobs that do not give enough social security cover.

It means an employee's provident fund and gratuity should be accounted for, health cover should be given and leave should be granted.

If the business shrinks, you can fire the employee, but he should get his two months's salary when he leaves.

But the kind of hire and fire you see today is asking an employee not to come the next day.

In Sriperumbudur, women working in the Nokia factory were given two days's notice. That is not okay.

There is an ILO definition of a decent job and you need to provide jobs which are defined like that.

They also don't say you can't hire and fire. Every business will have ups and downs. If a business is not competitive, it is obvious that you have to lay off people. I am not saying you cannot do that.

The general complaint of Indian industry is that the graduates coming out of universities are unemployable.
When I interviewed Sridhar Vembu of Zoho, he said it was the role of industry to train fresh graduates in whatever skill they wanted...

I don't agree with that at all. Education is supposed to be provided by educational institutions.

They should be ready for industry when they come out. If you are saying it is the responsibility of industry to train them...

Okay. In the first year, the company would be training the person without skills and after that, he will go elsewhere.

After acquiring the skills, he will be more attractive to somebody else. So, why should the company bear the cost which was supposed to be done by the educational institution?

So, what the company will do is, the person without skills will not be paid well and will be asked to work in conditions that are detrimental to his life.

Today, skill institutions like MBA schools are working like placement agencies. They don't train the students well at all.

Who is at fault? The universities?

Who trains those who eventually become teachers? It is a privatised industry and it is not functioning correctly.

You don't have a proper teacher training system, and that is the problem.

Skilling programmes today are only about meeting targets.

There is a lot of unlearning happening in many of the MBA schools. The problem is, you are placing people who are not skilled enough.

This is a crisis in the education system and not on the job front.

So, you will not blame industry for saying the fresh graduates are unemployable?

I will not blame industry for saying they are unemployable, I will blame the education system for rendering them unemployable.

It is said there is a shortage of 48% manpower globally while India has more than 50% extra manpower. How can we make this workforce fill the gap?

Have we not been doing that these last 25 years, to a point that other countries have raised barriers against us?

It means opportunities will not be there forever, they are there only for a limited window.

What India should do is create opportunities in India and train our people better.

You mean when the world is talking about protectionism, we should be concentrating on the Indian market?

Yes, India has got a very big market.

We require many more goods and services of better quality.

We require to provide job opportunities to those massive human resources we have got to serve our needs.

If we can make it culturally comfortable for a Bihari to work in Kerala, we are making progress.

That is already happening. A majority of the labour force in Kerala or Tamil Nadu is from Bihar, UP, Odisha and Bengal...

It is happening, but very often the Biharis get beaten up. There should not be any animosity towards these migrants. We need to accept them as our own brethren to have mutual growth.

Another migration that is happening is from the rural to urban areas. Is it not a lopsided development?

No. We require more urban areas to develop.

Tamil Nadu has done very well with more than 50% of the state as urban.

If other parts of the country also become more urban, it will solve most of our problems.

You feel the way to develop is through industrialisation and urbanisation?

Yes. Urbanisation and industrialisation are the right way to develop.

Instead of flooding one Chennai, you can have many more Coimbatores and Madurais.

Tamil Nadu has actually shown the way with 50% urbanisation and has least problems because of an urban explosion.

On the other hand, Karnataka has a very big problem with Bangalore in a very bad shape.

Chennai is not in such a bad shape compared to Bangalore.

Look at the condition of Gurgaon; it is in extremely bad shape.

As the managing director of the Centre for Monitoring Indian Economy, how would you describe the Indian economy?

I see the Indian economy slightly stressed currently. The growth rate has fallen and employment has stagnated.

For the Indian economy to revive itself, you need stronger investments.

Is it a gloomy scenario?

We have to create a more conducive environment for the private sector to invest.

Currently, the investment hunger has reduced; we need to revive that hunger in private sector to invest aggressively.

When we move away from focussing our attention on political problems like Kashmir, Pakistan, etc, to economic problems, then we will start doing better.