News
Business
Movies
Sports
Cricket
Get Ahead
Money Tips
Shopping
Sign in  |  Create a Rediffmail account
Rediff.com  » Business » Why vegetarianism is not all that great an idea for India

Indian farmers practise an agro-silvo-pastoral system and that livestock is a crucial part of their economy. Taking away the meat would demonetise their assets. It would kill their income, says Sunita Narain. 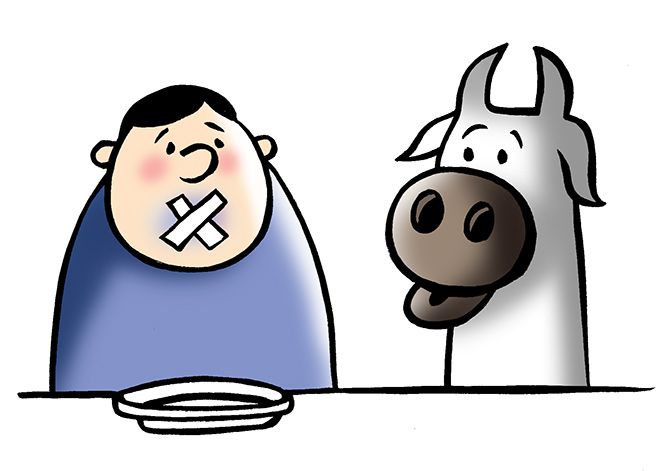 I would not advocate vegetarianism. When I reasoned this out in this column a few years ago, I received the usual insults.

Environmentalists are expected to be vegetarian or, better, vegan!

My argument has been that Indian farmers practise an agro-silvo-pastoral system and that livestock is a crucial part of their economy.

Taking away the meat would demonetise their assets. It would kill their income.

I argued that it is the quantity of meat we consume and how we produce the meat that matters the most to our health and the health of the environment.

Industrialised meat production is done at the cost of the environment -- by clearing vast forests, feeding animals cereals, antibiotics and all the other junk that they should not be using.

But Indian farmers still practise cow-buffalo-goat economy, which is of small scale.

In fact, this economy has been sustainable for the fact that it is in the hands of small farm owners.

Animals are their insurance policy; their ways of managing bad times, made worse today because of climate change induced variables and extreme weather.

We need to find ways to nurture this economy in which individual farmers benefit from the small-scale operation.

This was the Anand experiment -- made famous by the venerable man of India’s White Revolution, Verghese Kurien.

I am not sure how many of us have seen the wonder of this movement, as young girls, women and men bring their milk to the local dairy, which gives them a receipt of the fat content and the money that is due to them.

This local dairy farming is built on the concept of small, disaggregated animal owners, who are enjoined to the big dairy farm.

This is the cooperative-producer model, which is best suited for our people-heavy and employment-desperate country.

Ironic as it is, we celebrate Uber and Airbnb as disruptive models for growth.

These models are what Kurien propagated -- maximise the return from individual assets.

This is what Kurien did. He made dairy the big business of small producers. It was, and is, disruptive. We don’t recognise it because it is not in “our” world.

But it worked because there was a cow-buffalo economy in place, which included the cost of feeding and maintaining the cattle for milk and then its sale for meat.

Farmers do not have the means to keep “unproductive” cows. Let’s be brutally honest about this.

Why am I writing this today? Because as the fortnightly Down To Earth reports from the ground, in the past few years, the strident and often violent call for cow protection has led to the total breakdown of this economy of the poor.

Cattle are now abandoned. They have become a menace, marauding fields and destroying crops.

Remember, Indian farmers do not fence their fields; they cannot afford it and actually this is good for soil and water conservation.

Now this is not going to work.

The only change I can see is that farmers will altogether give up keeping cows and will switch to buffalo economy.

But this will also work only when the State cracks down on all cases of cow-related lynching mercilessly.

We need to note that in almost all cases where the meat has been tested, after the lynching, it has been found to be that of a buffalo and not cow.

But it has not mattered. Cases of so-called cow vigilantism continue.

This is also because the State has often protected, not the poor cow, but her so-called worshippers who have taken the law into their hands.

I would also argue that we shouldn’t adopt the protein-obsessive Western diet.

This is also part of health and environmental problems. A recent article in the UK daily The Guardian says that this protein obsession is leading to vast over-consumption.

Citizens of the US and Canada get roughly 90 grammes of protein per day, which is twice the recommended average intake (based on an adult weight of 62 kg); Europeans eat an average of 85 gm of protein per day.

Indian averages really don’t count because of the vast numbers of protein-deprived and malnourished people, but our urban consuming class is picking up this bad habit as well.

Being (non)-vegetarian is a personal choice. We must fight for this. Even as we fight for growing meat in a way that is environmentally sound.