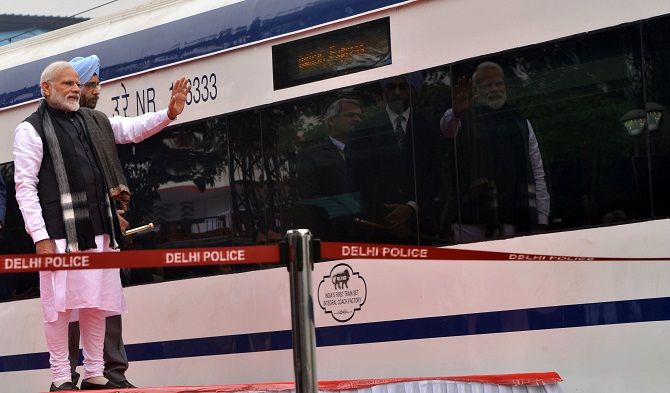 In May 1972, when the Mumbai-New Delhi Rajdhani Express was launched, many believed it was going to be the king among Indian trains. And rightly so. Clocking 110 to 120 kilometre per hour (kmph), it ruled the Indian tracks till the 1980s.

When Train 18, or Vande Bharat Express, running between New Delhi and Varanasi, was inaugurated on February 15, it spelt the arrival of the new crowned prince of the Indian Railways.

Despite hitting the tracks in the shadow of terror, the narrative that Train 18 would replace the iconic Shatabdis and Rajdhanis grabbed attention and made it the most anticipated train of the time.

Travelling on it on its maiden journey was, therefore, a unique experience, even though it came amid beefed-up security and ended on a rather traumatic and unforgettable note.

"Will the flag-off be cancelled?" This question haunted railway officials after a Jaish-e-Mohammad suicide bomber claimed the lives of 40 CRPF jawans in Pulwama just a day before the flag-off.

The Indian Railways, however, opted to go ahead with the event in a display of resilience.

From the outside, the swanky engineless train with an aerodynamic nose cone design is quite a looker -- something we have never seen before on Indian tracks.

Apart from its aesthetic look, the nose cone design of the driver's cabin also helps in saving energy by reducing air drag.

The Integral Coach Factory in Chennai, which has designed and built the train at the cost of Rs 100 crore (Rs 1 billion), has ensured that a traveller falls in love with it at first sight. 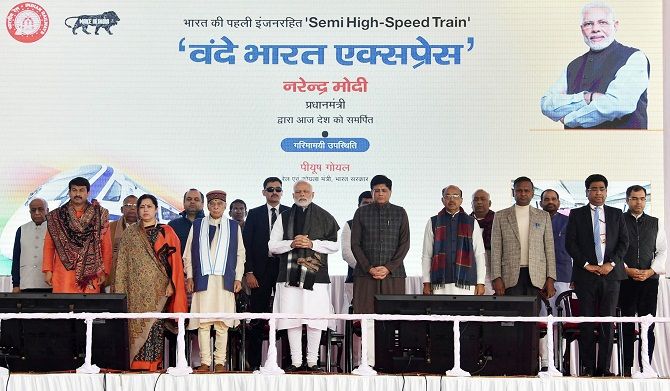 Grabbing a seat on the train was a herculean task, given the long queue for clearing the multi-layered security barriers.

Though the flag-off was expected at 10 am, due to an unplanned Cabinet meeting following the terror strike, Prime Minister Narendra Damodardas Modi arrived late. And the train, carrying Railway Minister Piyush Goyal, journalists and senior railway officials, finally pulled out of Platform No 1 of the New Delhi railway station at 11.19 am amid chants of Vande Mataram.

Though Train 18 is reported to be a completely 'Make in India' initiative, many parts of its first prototype are imported. The seats are of Spanish make and the windows are Chinese.

This is owing to the tight deadline of 18 months that ICF had to meet from conceptualisation (in May 2017) to putting on track the first train.

For the initial train with 16 air-conditioned coaches and a seating capacity of 1,128, imports were, therefore, the only option.

The Pulwama shadow forced the government to go on high alert for the inaugural run. One could see armed security personnel stationed on the train's route at every 100 metres till it left the city limits of Delhi.

The hype and curiosity around Vande Bharat had also drawn thousands of people who stood on both sides of the tracks, waving their hands, throughout its maiden run. 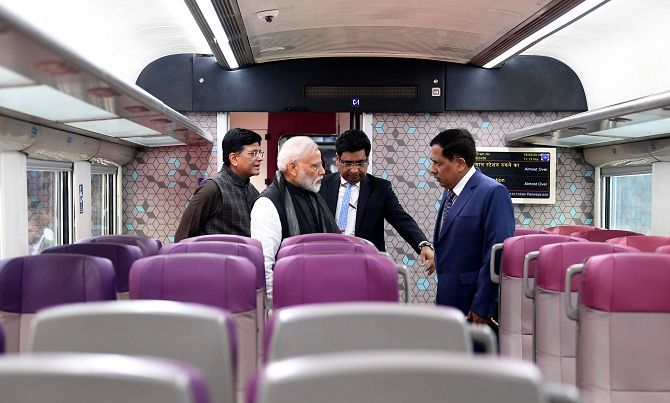 So, is Vande Bharat India's fastest train? Of course not. Trains like Gatimaan clock 160 kmph.

"What makes it unique for a loco pilot is its ability to touch the maximum permitted speed of 130 kmph in a span of 45 seconds, while Gatimaan takes at least five minutes to do the same," says Manoj Tiwari, one of the loco pilots. "Faster acceleration/deceleration and braking are its unique selling propositions."

The advance regenerative braking system saves about 30 per cent more electricity than a normal train. Tiwari sounds relieved and happy as he adds that Vande Bharat offers a toilet and mini-kitchen for loco pilots too.

What makes the train special as it completes the 769-km stretch in a span of eight hours, at an average speed of 96 kmph?

A regular train in this route takes at least 13.10 hours to cover the same distance between New Delhi and Varanasi, so the average speed on the route is only 59 kmph.

During an on-board press conference, Goyal explains that the train is capable of hitting 160 kmph, but that is expected to happen after the fencing of tracks between New Delhi and Varanasi in key areas. One common comment from fellow travellers was: "If not overpriced, the train is overhyped for sure."

For an eight-hour journey, it neither has the reclining seats of the Shatabdi nor a personal LCD screen entertainment option of the Tejas Express.

The wi-fi available is also for pre-recorded, on-board infotainment. Though the interiors are plush, the haste that its makers have shown is evident in the finishing.

"This is just a prototype. Moreover, it has undergone over 5,000 km of trial run. All those flaws will be rectified in the upcoming fully Indian-made trains," says a senior railway official on board Train 18.

The fares, too, are on the higher side for a price-conscious market, with a chair car ticket costing Rs 1,760 and the executive class fare of Rs 3,310.

The food on offer is, however, the key highlight. The meals will come from the Institute of Hotel Management in Pusa, the Landmark five-star hotel in Kanpur and Pind Balluchi in Allahabad.

We got a taste of the food on the train's debut run and it was delicious. The catering charges are fixed at Rs 399 and Rs 344 for executive chair car and chair car, respectively.

The train does have a lot to offer to its passengers: Silent run, fully-sealed gangway connecting two coaches, GPS-based passenger information system, modular bio-vacuum and disabled-friendly toilets, intelligent air conditioning that adjusts cooling according to the climate and closed-circuit television for safety.

The train has both Indian and western style toilets, both of which come with auto-sensor taps. The toilets in the executive class also have rotational seats.

The train, with only two stops at Kanpur and Allahabad, had a long, 45-minute break at the two stations. Once the commercial run begins, this will be a two-minute halt.

With nationalist sentiments at a peak after the terror strike, people on the platforms raised anti-Pakistan slogans on seeing the train that had become a symbol of pride.

We finally reached Varanasi around 10 pm.

For those of us expecting a Bollywood-style happy ending, there was a twist in the tale. A few journalists and railway officials, including this reporter, managed a seat on the return journey, or the empty-run, of the Vande Bharat Express from Varanasi, expecting to be back in Delhi by the morning of February 16, a Saturday. The train's first commercial run was scheduled for Sunday. 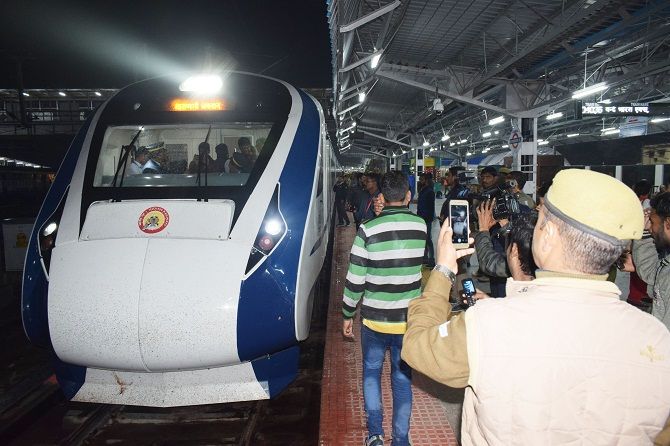 What started as a smooth journey, however, took a traumatic turn around 5 am, when the train stopped after smoke was noticed in the last four coaches. There was also a foul smell.

The power in these coaches was gone off, forcing the loco pilots to stop the train multiple times, creating panic among its few passengers.

There had been a technical snag. After that, the train proceeded at speeds of less than 40 kmph, going down to even 10 kmph.

On the route, it also made two small halts. We deboarded at Chamraula, about 18 km from Tundla, to catch a separate train.

We were later informed that the train had a communication problem with the four coaches, triggered by a possible cow overrun.

After rectifying the faults, the train reached New Delhi and was ready for its first commercial run at 6 am on February 17.

It wasn't the perfect ending, but the unanimous sentiment was this: "Love it or hate it, but you cannot ignore the Vande Bharat Express."