Nearly 31 million Indians are unemployed and looking for jobs.
While economic growth has been humming along, the pace of job creation has been poor.
A revealing excerpt from Dev Kar's India: Still A Shackled Giant. 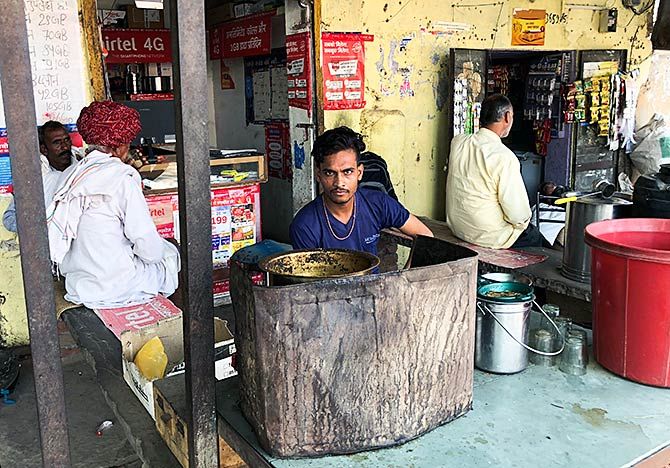 Like millions before him, Anil Gujjar, the son of a farmer, arrived in Delhi from a small village in Rajasthan in the hope of finding work.

With little money in his pocket, and a lot of hope in his heart, he slept the night on a sheet he spread on the railway platform.

The next day he was to appear for a written exam for a menial position in the Indian Railways.

Little did he know that there were 19 million applicants for the Railways' 63,000 'Group D' positions that required little or no skills.

These were jobs such as helper, porter, cleaner, gateman, track maintainer and assistant switchman.

Anil knew that finding a job in today's India was very difficult and extremely frustrating.

But he did not know all the depressing details. 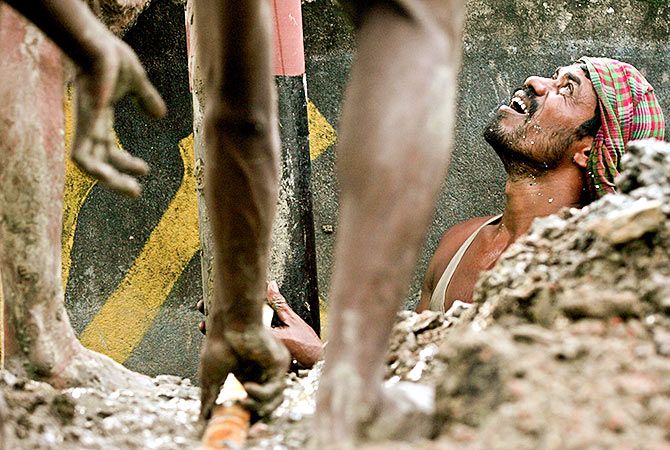 Between 2011 and 2016, unemployment increased in nearly all Indian states.

Among the educated youth, unemployment more than doubled during this period from 4.1% to 8.4%.

According to the Centre for Monitoring Indian Economy, nearly 31 million Indians are unemployed and looking for jobs.

While economic growth has been humming along around 7% to 8% per annum recently, the pace of job creation has been poor.

The CMIE has noted that there was no growth in employment in the fiscal year 2017-2018.

Modi's government faces a serious challenge in not only generating enough jobs to absorb the 6 to 8 million new entrants to the job market every year, but also to find work for others who have been looking for them.

While the lack of employment data since 2016 has clouded the present jobs situation, there is no doubt that the dismal state of India's job market represents a political liability to any government.

An official report supposedly places unemployment at an all-time high of 6.1%, most of them unemployed young.

The government has denied the report's existence. 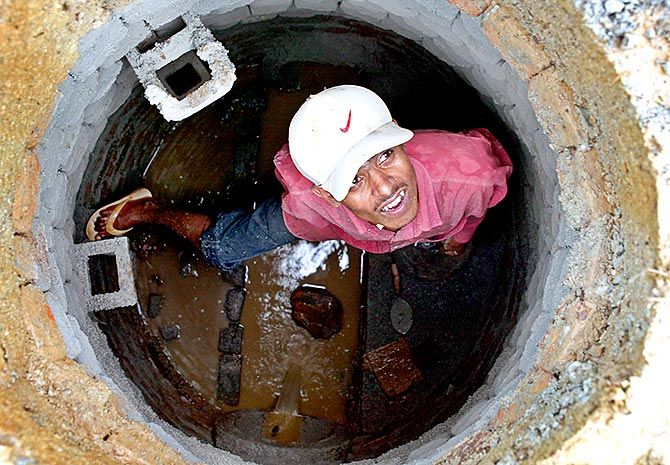 While unemployment is naturally an emotive issue in a country of 1.3 billion people with a young workforce, the capacity to generate jobs is not in the hands of any politician, regardless of their promises.

Politicians can only adopt economic policies that would create an enabling environment for private investment, whether domestic or foreign.

But economic policies themselves, least of all politicians, cannot compel private companies to actually hire.

While growth is necessary for job creation, it is not sufficient.

There are many bottlenecks along the way from growth to job creation.

Economic growth has created fewer and fewer jobs in each successive spurt of growth.

The share of those working as a percentage of the working-age population fell to 42.7%, lower than the same quarter in the previous fiscal year. 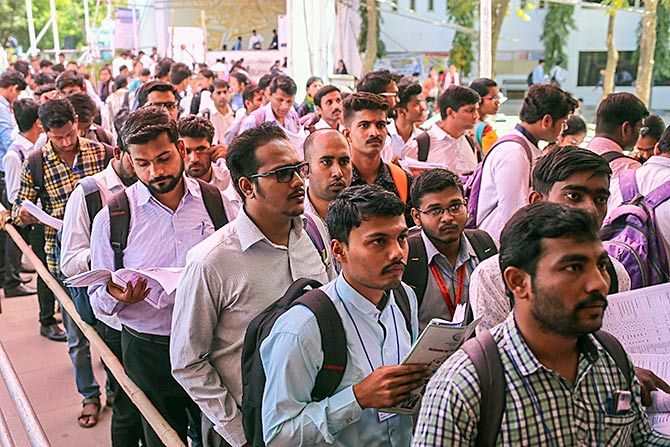 Why is that so?

Note that the information on employment and unemployment all refer to the formal sector, meaning companies and businesses that are registered, pay taxes, and are covered by India's labour laws and regulations.

They do not refer to the informal sector where people work for themselves (are self-employed).

The informal sector also includes jobs that are low-skilled and do not require formal education such as rickshaw puller, domestic help, small businesses, etc.

Hardly any information is available about the informal sector although it plays such as important role in the Indian workforce.

A significant increase in job creation was one of the key promises of the BJP in the run-up to the 2014 general election.

In fact, the BJP criticised the United Progressive Alliance government led by the Congress that it had dragged the country through ten years of jobless growth.

The BJP promised to revive the economy in a significant way, according a high priority to job creation and entrepreneurial initiatives.

While developments on the employment front were not good news for the BJP, it nevertheless came back and won 301 seats in the 2019 general election.

Perhaps many voters realised that 'jobless growth' seems to be the new normal around the world -- not just in India.

By that I mean economies typically do not create as many jobs these days as they used to during past phases of economic growth.

This 'jobless growth' is partly due to technological change, automation and fierce competition in a globalised world holding down profit margins.

As a result, companies have been trying to squeeze out more from their existing workers rather than add to their payroll. 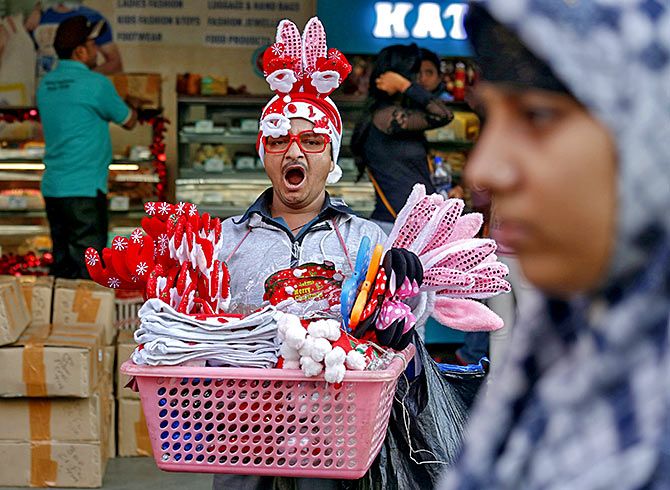 According to the ILO study, as a result of potential automation of low-skilled jobs, the typical pathway for the poor (who are stuck in yet lower-skilled jobs) to move up the skills chain into better-paying jobs may dry up.

But because the category of low- to medium-skilled jobs within the organised sector (those of a cashier) is still very small, India may not experience the kind of hollowing out of the labour market that advanced countries have had to face.

Nevertheless, millions of workers in the informal labour market who aspire to move into medium-skill jobs may find fewer such jobs as a result of automation.

This is an additional challenge that the government has to face when formulating policies for creating better-paying jobs.

The ILO study notes that while it would be difficult to reskill the present-day workers who are older than 45 years, skill-based vocational training can empower the youth in working towards gainful employment. 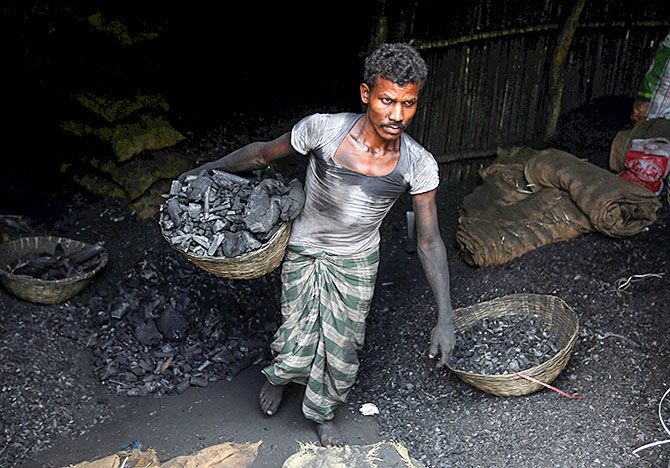 The ILO notes that in particular, 'digital skills, humanistic and interpersonal skills (especially relevant in the service sector) along with learnability (ability to adapt through lifelong learning and acquiring of new skills), will be central to accessing decent work opportunities'.

The bottom line is that for unemployment to come down during any period, the number of new jobs created must be greater than the number of people entering the labour market during that period.

The period can be a year or a month.

Now, the number of people entering the labour market depends on the country's birth rate as well as the death rate.

If more people are born than die during a year, the population will increase along with the number of new entrants into the job market.

The problem of employment in India is two-fold.

These investments cannot be expected to yield immediate results. 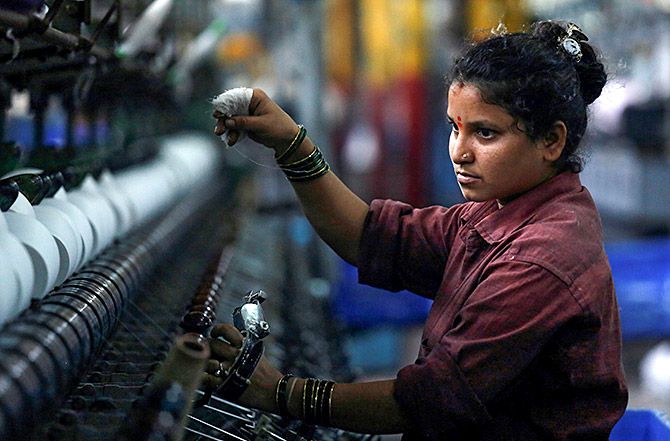 IMAGE: A woman works at a textile mill in Mumbai. Photograph: Francis Mascarenhas/Reuters

By nature, such investments take a long time to bear fruit.

But, they are crucial in ensuring that the benefits of economic growth are widely distributed across all income groups.

Second, there is a need to shrink the size of the informal sector by helping more workers to switch to jobs in the formal sector.

This requires that the formal sector create many more jobs than it is currently doing.

India should get ready for the coming technological revolutions which have already started to eat into job growth in many advanced countries.

India needs to undertake massive investments in health, education and vocational training so that workers are better equipped to compete for the jobs of the future.

While there is a lot of scope for further expanding exports, a large country such as India with the world's second-largest population has a huge potential to cater to domestic markets in many goods and services.

Archaic and unnecessary labour regulations should be done away with and replaced by a minimum of government intervention to extend worker rights and ensure workplace safety. 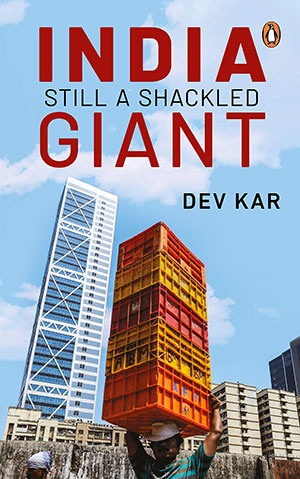 Excerpted from India: Still A Shackled Giant by Dev Kar with the kind permission of the publishers, Penguin Random House India. 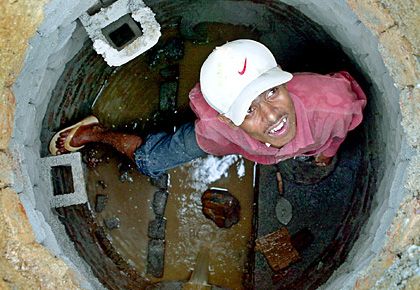 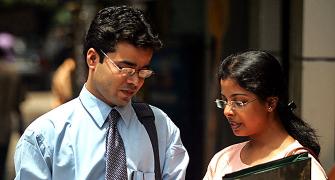 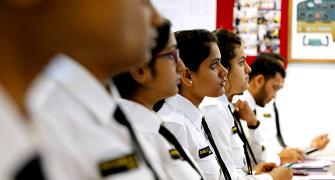