News
Business
Movies
Sports
Cricket
Get Ahead
Money Tips
Shopping
Sign in  |  Create a Rediffmail account
Rediff.com  » Business » It's not Greece, but Portugal who owes the most to IMF 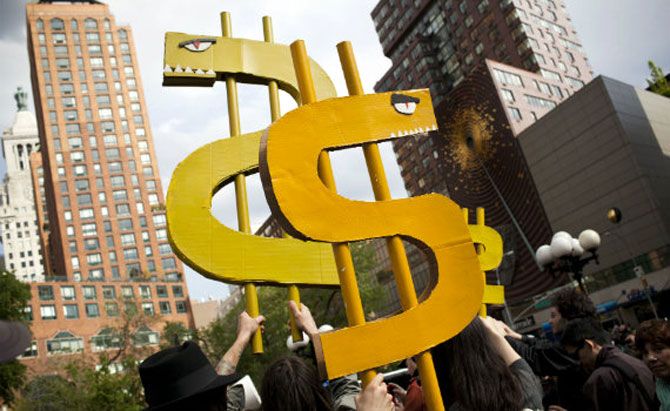 The recent volatility in the market has been triggered by developments in Greece, which defaulted on repayment of a tranche of its loan from the International Monetary Fund (IMF). In a referendum on Sunday, the Greeks declined to accept European creditors’ bailout offer, with 61.3 per cent voting “No” and 38.7 per cent “Yes”.

Data collected from the IMF website suggest that a total of 79 countries owed a staggering $68.82 billion in SDRs (special drawing rights) as on May 31 this year. The amount includes General Resources Account (GRA) arrangements, which comprise a variety of lending programmes with different disbursement schedules and maturities, depending on the balance of payment needs of the member, plus Poverty Reduction and Growth Trust (PRGT) pledges.

SDR is a supplementary foreign exchange reserve asset defined and maintained by IMF. Its value is based on a basket of key international currencies (the euro, Japanese yen, pound sterling, and US dollar) reviewed by IMF every five years. As on May 31, 2015, the value of one SDR in dollar terms stood at 1.390500, valuing the total amount due from the borrowing countries at $84.57 billion.