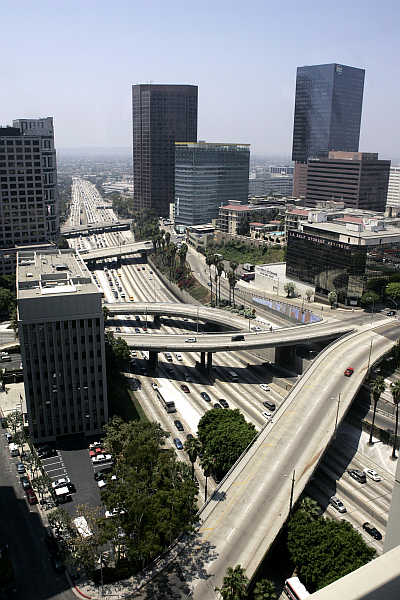 Image: Harbor Freeway in Los Angeles, one of the biggest megacities in the world.
Photographs: Sam Mircovich/Reuters

There used to be a time when cities such as New York, London and Paris dominated the rankings of major cities in the world. With the rise of Asia, especially China and India, the picture is changing.

Now, cities such as Beijing and Mumbai are directly competing with New York and Los Angeles.

Let's take a look at 25 biggest megacities in the world, according to Demographia's World Urban Areas index. 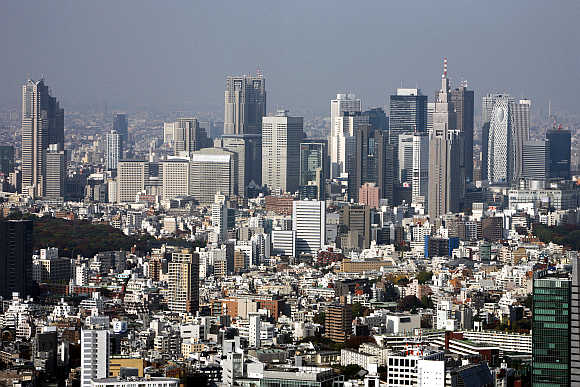 Image: A cluster of high-rise buildings in the Shinjuku district in Tokyo.
Photographs: Stringer/Reuters

Tokyo, one of world's major international financial centres has headquarters of some of the biggest companies, including many top investment banks and insurance firms. It has been labelled most expensive city for expatriates, one of the most livable cities and has been awarded most Michelin stars in the globe.

It offers several avenues for shopping, entertainment, culture and dining. The city's history can be revisited and appreciated in such places as Asakusa district, museums, temples and parks. Although a major metropolitan city, it has maintained many green spaces and gardens. 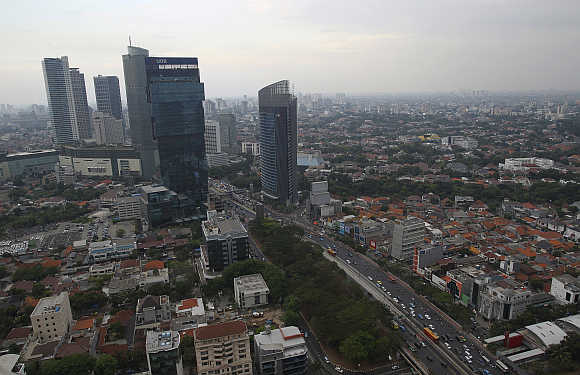 The city has many art centres, such as Taman Ismail Marzuki and Gedung Kesenian, offers wide variety of cuisine, including Indian, and hosts several well-known events, such as Jakarta International Film Festival. 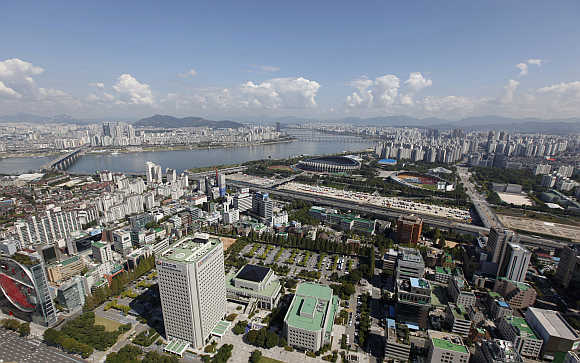 Image: Part of Gangnam area is seen down the Han River in Seoul.
Photographs: Lee Jae-Won/Reuters

Seoul, the bustling capital of South Korea, accounts for only 0.6 per cent of South Korea's land area, but generates 21 per cent of the country's GDP. Seoul boasts one of the best infrastructures in the world, especially fibre optic cables that deliver globe's fastest Internet connections with speeds up to 1 Gbps.

It has five ancient palaces and five World Heritage Sites, more than 700 museums, including the National Museum of Korea and the National Folk Museum, and many performance centres and galleries. 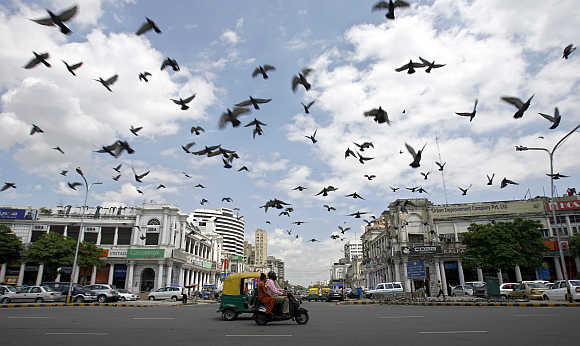 New Delhi, whose foundation dates back to December 15, 1911, has been described as the best city to live in India. Its wide roads, historical buildings, museums and culture have won high praise. The country's capital is one of the world's economic powerhouses.

Some of the famous and must-see places in the capital are: National Museum, India Gate, the Rajpath, Qutub Minar and Jantar Mantar. The city is also known for its cuisine, especially, Awadhi foods, shopping areas and colleges and universities. 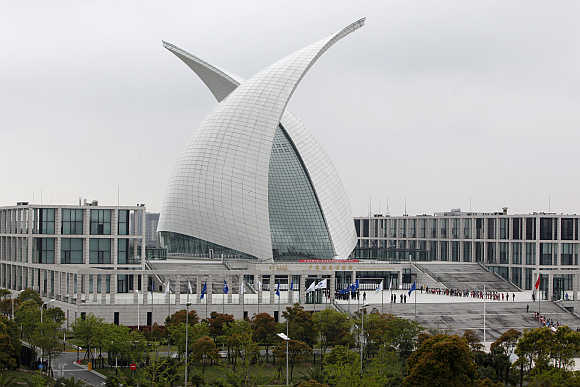 In the past two decades, Shanghai has been one of the fastest developing cities in the world. Known as the 'Oriental Paris', it has several bustling commercial streets and shopping centres. Some of the must-see places for shoppers are Nanjing Road, Huaihai Road, North Sichuan Road and Xujiahui Shopping Center. The city, a major financial player in the world, is home to almost all major companies and institutions. 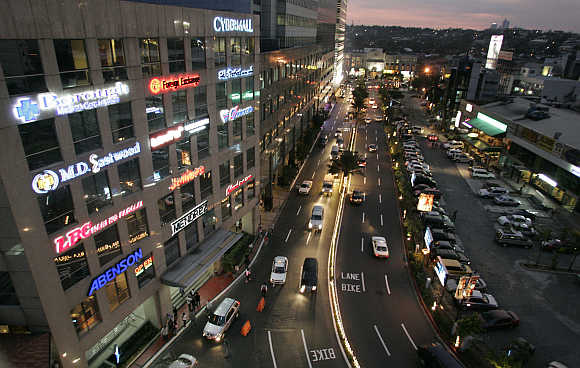 Manila, the cultural, political and financial capital of the country, has a diverse and multifaceted economy. It has the second-biggest population in the Philippines, after Quezon City. The city attracts more than a million visitors every year and some of the major destinations include Ermita, Malate, Santa Cruz, the Manila Zoo and the City Chinatown. Image: Fishermen are silhouetted against the setting sun as they pull their net to retrieve their catch at Karachi's Clifton beach.
Photographs: Athar Hussain/Reuters

Karachi was the country's capital before it was decided to construct Islamabad and ease some of the pressures on Pakistan's business centre. It has region's two of the busiest ports, Port Bin Qasim and Port of Karachi. Like Mumbai, it's the country's financial and business centre and is home to several companies and manufacturing units.

It is one of the biggest hubs of international business and commerce and one of three 'command centres' for the world economy. New York is known as a major centre for banking and finance, retailing, trade, tourism and media. It is the home of some of the largest corporations in the world and the base of New York Stock Exchange, the largest stock exchange in the world. 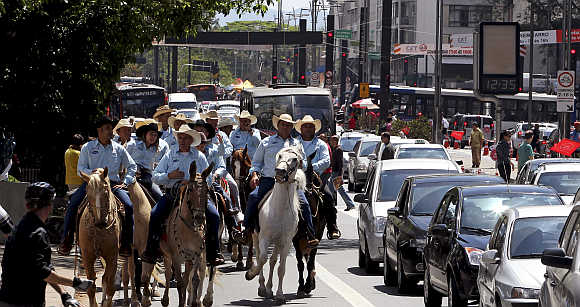 Sao Paulo has the biggest economy among Latin American and Brazilian cities and its GDP is second only to Brazil's capital, Brasilia. The city is famous for its monuments, parks, museums and skyscrapers. It is home to several important monuments, such as Latin American Memorial and the Museum of the Portuguese Language, organises many high-profile events, such as Brazilian Grand Prix, and is home to some of the biggest media companies. 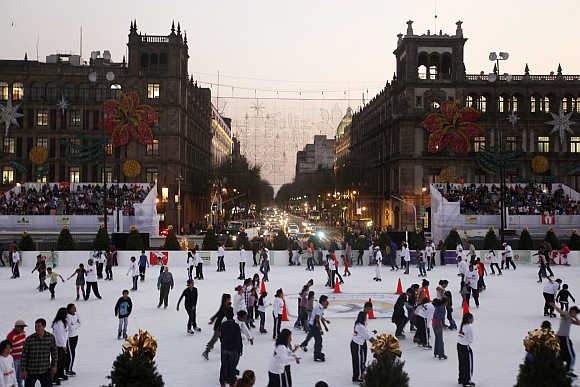 The city generates 21 per cent of Mexico's Gross Domestic Product and the metropolitan area accounts for 34 per cent of total national GDP. It is one of the most influential business hubs in North America. It has more museums than any other city, third-most theatres in the world and is home to biggest spenders in the country. 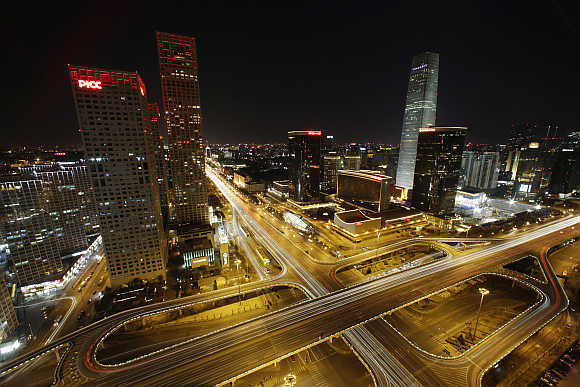 Beijing, the base of China's state-owned companies, is not only the political and cultural capital, but also has the second-busiest airport in the world. Beijing is base of 41 Fortune Global 500 companies, the highest number in the world after Tokyo, and more than 100 of the largest firms in China. According to PwC, its economic influence has been ranked number 1 in the globe. 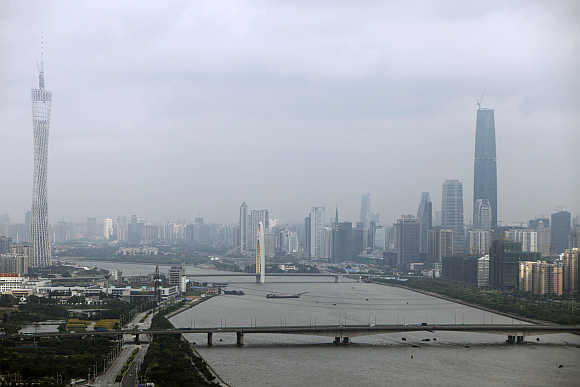 Guangzhou, southern China's biggest and the nation's third-largest city, is a major transportation centre and trading hub. The city has many tourist attractions, including Chan Clan Ancestral Hall, Shameen Island and Temple of the Six Banyan Trees. 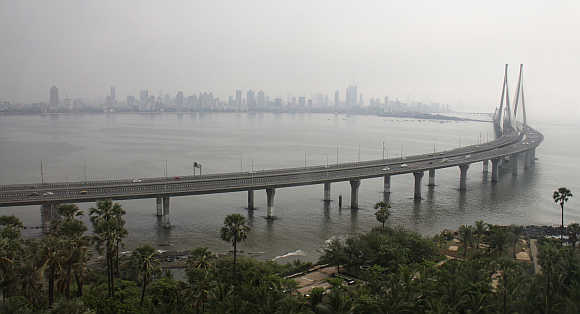 Mumbai, the financial capital of India, is the home of Reserve Bank of India, Bombay Stock Exchange, National Stock Exchange of India, Securities and Exchange Board of India and several Indian and foreign companies. Some of the must-see places for tourists are Gateway of India, Marine Drive, Haji Ali Dragah, Jehangir Art Gallery, Chhatrapati Shivaji Maharaj Vastu Sangrahalaya and the Asiatic Society of Bombay.

Image: Passers-by are silhouetted against advertisements in the Dotonbori shopping and amusement district in Osaka.
Photographs: Issei Kato/Reuters

Osaka, one of Japan's biggest financial centres, has daytime and nighttime population ratio of 141 per cent, the highest in the country. While its population during the day is 3.7 million, it drops to 2.6 million at night, which shows its round-the-clock economic activity. The city is home to several big companies, such as Panasonic, Sharp, and Sanyo. 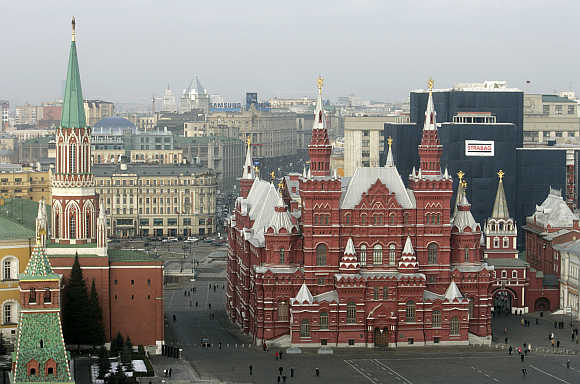 Moscow, which boasts the second-largest number of billionaires globally, has four international airports, nine railway terminals and one of the busiest metro systems in the world. The city has a bustling nightlife and shopping centres, including Moscow City Center, Rublevka and Tverskaya Street. Tretyakovsky Proyezd has some of the most expensive outlets, such as Bulgari, Tiffany, Armani and Prada. 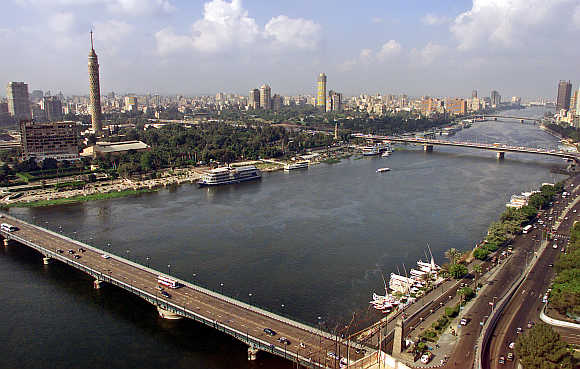 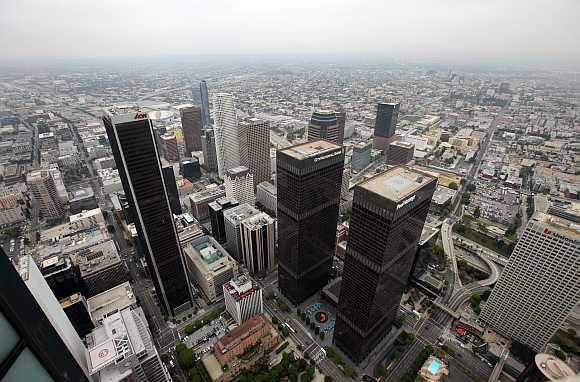 Los Angeles, which was founded on September 4, 1781, is a business, trade, entertainment and research powerhouse. It is home to several Fortune 500 companies. Some of the city's landmarks are Walt Disney Concert Hall, the Kodak Theatre, the Hollywood Sign and Hollywood Boulevard. It also has some of the best shopping streets and boasts such big names as Louis Vuitton, Chanel, Hermes, Burberry and Coach. 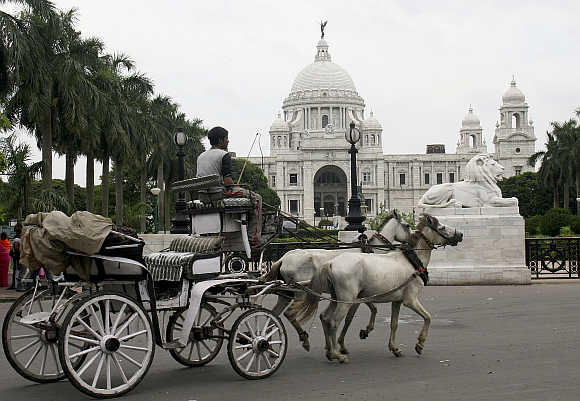 Image: A horse-cart passes in front of the Queen Victoria Memorial in Kolkata.
Photographs: Jayanta Shaw/Reuters

It is the main commercial and financial hub of East and North-East India and home to the Calcutta Stock Exchange. It also houses several cultural institutions, such as the Academy of Fine Arts, the Victoria Memorial, the Asiatic Society, the Indian Museum and the National Library of India. 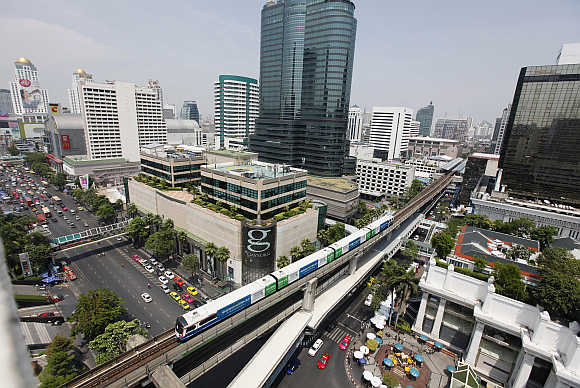 Image: A skytrain passes over vehicles on road in Bangkok.
Photographs: Kerek Wongsa/Reuters

Bangkok, which used to be a trading post during the Ayutthaya Kingdom in the 15th century, is now a global business, cultural hub, especially known for its night life. Wholesale and retail trade is the largest sector in the city's economy, contributing 24.0 per cent of Bangkok's gross provincial product. It is followed by manufacturing (14.3 per cent); real estate, renting and business activities (12.4 per cent); transport and communications (11.6 per cent); and financial intermediation (11.1 per cent), according to Wikipedia. Tourism is also a big revenue generator, contributing more than $15 billion per year. 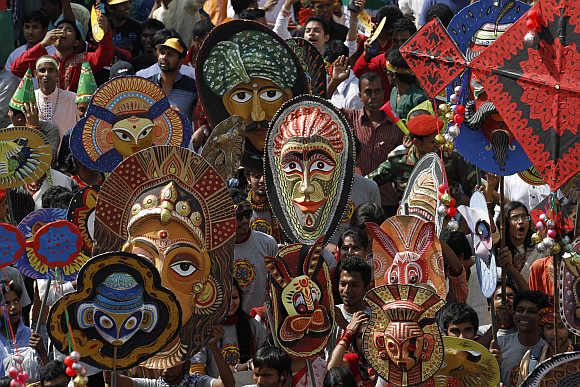 Dhaka is one of the two main financial and industrial centres of the country. It is also one of the fastest growing cities in the world. The city's main commercial areas are Motijheel, Dilkusha, Paltan, New Market, Shahbag, Gulshan, Mohakhali, Karwan Bazar and Farmgate, while Tejgaon and Hazaribagh are its industrial heartbeat. 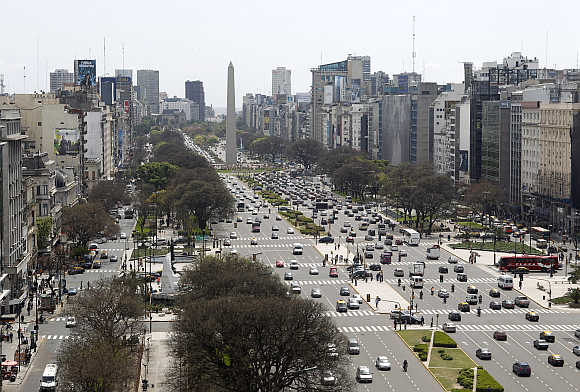 Buenos Aires has been ranked as the most important financial centre in Latin America. The city is the country's biggest tourist destination, is famous for its European style architecture and has the highest concentration of theatres in the world. According to Wikipedia, Buenos Aires is the political, financial, industrial, commercial and cultural hub of Argentina. Its port is one of the busiest in South America. 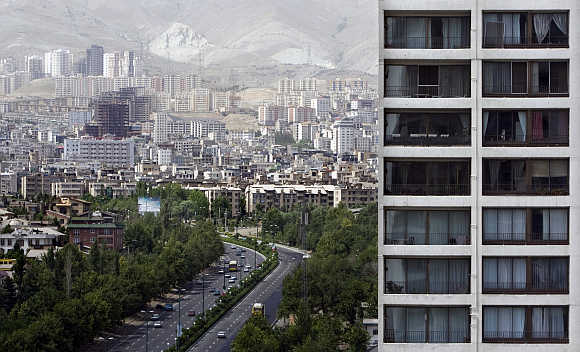 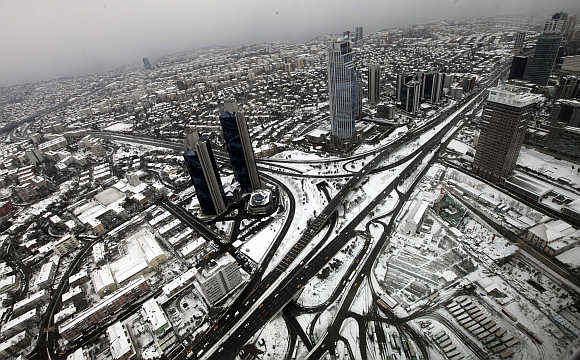 Istanbul, one of the fastest growing economies in the world, hosts several companies and media firms and contributes more than a quarter of Turkey's gross domestic product. 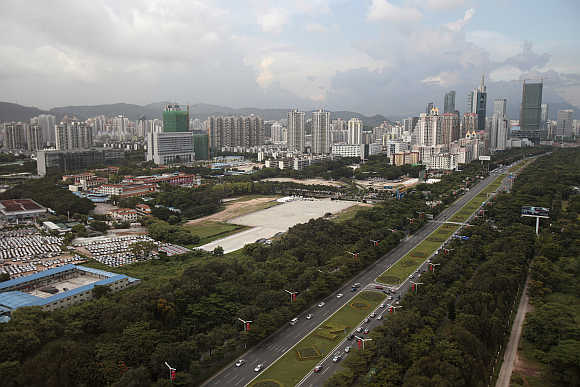 Shenzhen used to be a small village, but is now a major financial centre, has modern cityscape, has attracted more than $30 billion in foreign investment and is now one of the fastest-growing cities in the world. 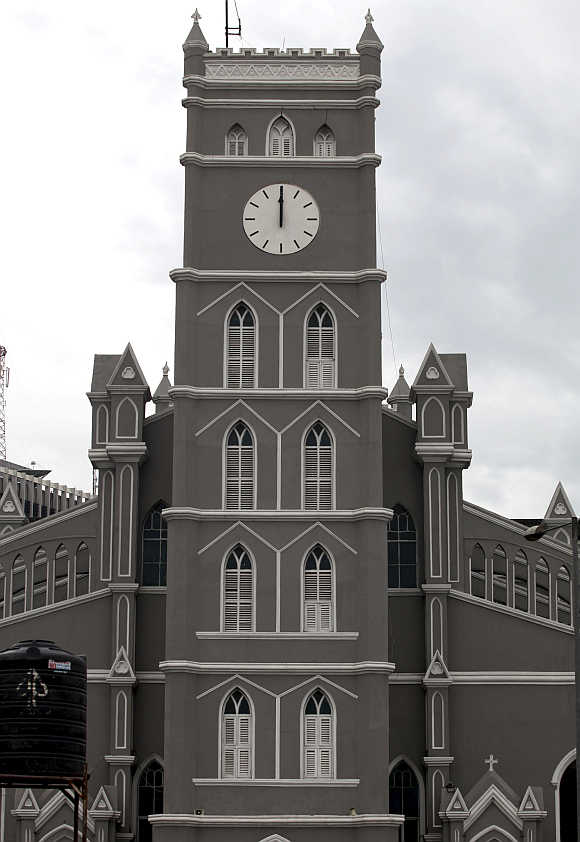 Lagos, Africa's third-biggest city, has one of the largest and busiest ports in Africa, is home to country's commercial banks, financial institutions, major corporations and has one of the best standards of living in the continent.