Sign in  |  Create a Rediffmail account
Rediff.com  » Business » Ride an AC tram, get a taste of old Kolkata! 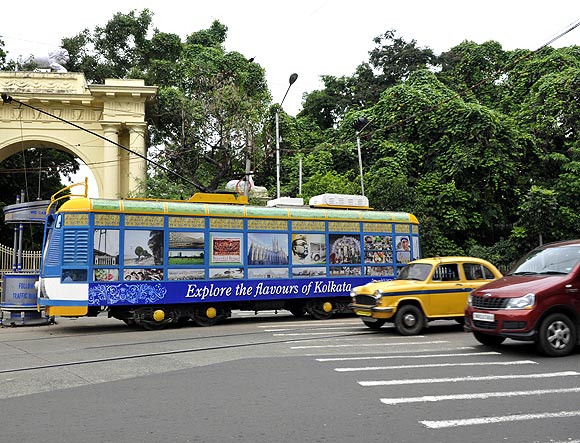 With a capacity of 24 and equipped with a television and FM radio, the AC tram runs four rides daily to the north and south of the city. Each ticket costs Rs 260, including snacks

A lot is often heard about Kolkata’s dwindling traffic system and how its age-old trams, means of transport that are still existing only in this part of India, are adding to the commuters’ woes.

There have even been talks of doing away with old tram cars for good and redesign the city's traffic network.

However, trams are still plying in Kolkata and measures are being taken to resuscitate the 133-year-old Calcutta Tramways Company.

Recently, West Bengal Tourism Department along with CTC launched air-conditioned trams to help Kolkatans get a taste of the city’s heritage while seated comfortably in plush interiors.

This is looked upon as the state government's attempt to breathe fresh air into the weakening financial resources of CTC.

We took a ride in one of these AC trams early morning this week and got a taste of old Kolkata’s magical heritage. 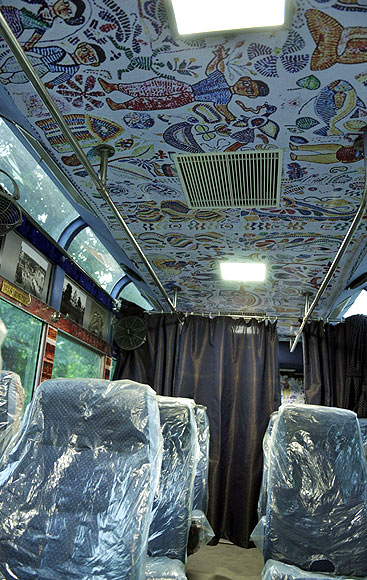 “The idea to launch AC trams in Kolkata was in our minds for long. In fact, the project was ready a few years back,” Amlan Jyoti Saha, assistant director, department of tourism, government of West Bengal, told rediff.com.

“But the project failed to take off because of some infrastructural issues.

“This time, the tourism department worked in tandem with CTC and AC trams saw the light of the day,” he added.

While CTC has taken care of the logistics, state’s tourism department has been involved in designing the tram car. 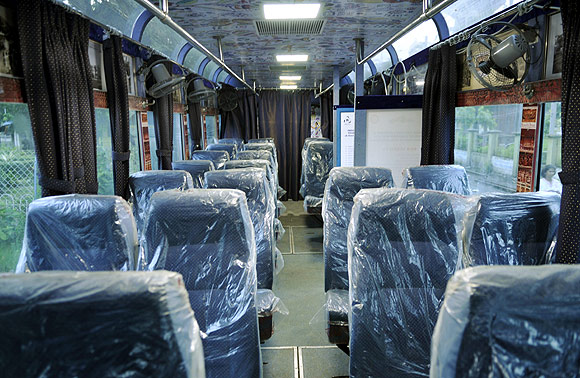 Image: With a capacity of 24 and equipped with a television and FM radio, the AC tram four rides daily to the north and south of the city.
Photographs: Abhiroop Dey Sarkar.

With a capacity of 24 and equipped with a television and FM radio, the AC tram runs four rides daily to the north and south of the city.

The tram initiates its journey from the Esplanade tram depot and comes back there at the end of each trip.

“The morning trip takes one to the north of the city while the afternoon/evening ones cover the south," CTC chairman S Jain told rediff.com.

A state tourism department employee, Arnab Banerjee, travels with the passengers as their guide and tells them interesting tales of the landmarks the tram car passes through.

Each trip costs Rs 260, including refreshments dished out by uniformed tourism staff. 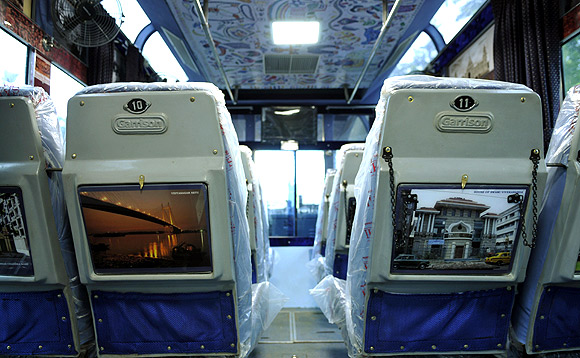 During this trip, the tram takes a small break at Shyambazar tram depot in north Kolkata before meandering its way back.

The sprawling Maidan and the famous Victoria Memorial can be seen in the afternoon tours.

The south-bound tram makes a brief stop-over at the Maidan. 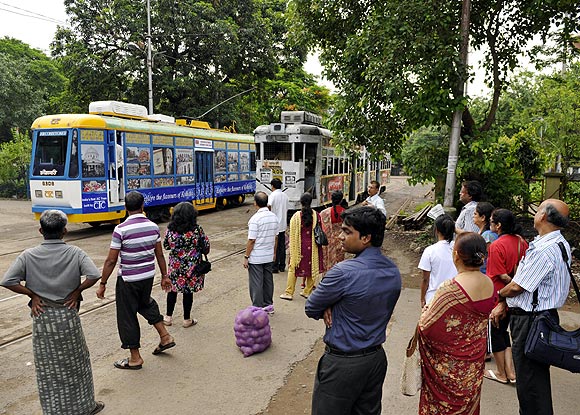 Image: Commuters wait to get on to the AC tram at the Esplanade tram depot.
Photographs: Abhiroop Dey Sarkar.

Trams have been an integral part of the city’s history for centuries.

The Kolkata tram is the oldest operating electric tram in Asia, running since 1902.

The Calcutta Tramway Co. Ltd was formed and registered in London in 1880. Metre-gauge horse-drawn tram tracks were laid from Sealdah to Armenian Ghat via Bowbazar Street, Dalhousie Square and Strand Road.

The route was inaugurated by then Viceroy Lord Ripon. 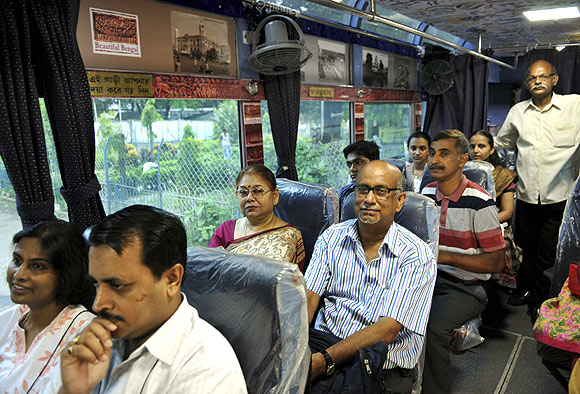 Asked about the response that the AC tram has got so far, Saha told rediff.com, “The interest is picking up fast.

“It will take time but we are confident that people of Kolkata will fall for it,” he said, adding,

“We see a good crowd on Sundays and other holidays. On such days, the tram’s early morning trip is booked in full.”

Interestingly, the tram can be chartered by private parties, Saha told rediff.com.

“Anyone willing to hire the tram will need to book all 24 seats. In that case, s/he will be offered 5 per cent discount for a two-hour trip,” he said.

One can even hire it for longer periods but in that case the fare has to be negotiated between both the parties. 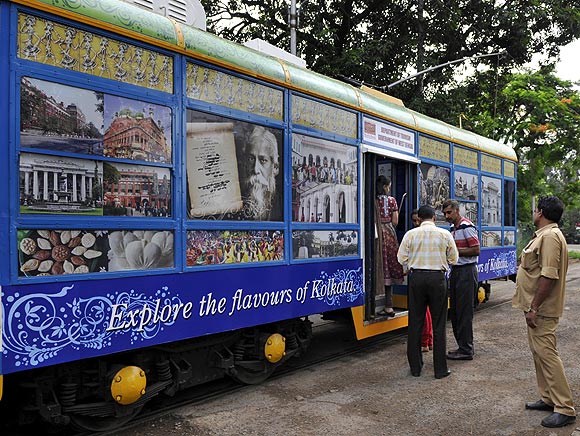 Image: Tickets for the AC tram can be booked either online or at the Esplanade terminus.
Photographs: Abhiroop Dey Sarkar.

Tickets for the AC tram can be booked either online or at the Esplanade terminus.

For online bookings, one will have to log in to http://www.railtourismindia.com/TourPackages/RailTour/The-Tourist-Air-Conditioned-Tram.html

"There is only one tram running now but another AC tram is being readied in the workshop," Aniruddha Roy, West Bengal Tourism Department employee, told rediff.com.

He accompanies the passengers during each trip.

"My job is to take care of their needs and to see to it that they are not inconvenienced during the journey,” Roy said.