Sangakkara’s brilliant innings provided the much-needed impetus  for Sri Lanka, thereby helping them to a competitive 219 for eight after they resumed from an overnight 60 for three in the fifth match of the tri-series. With constant rain interruptions, the game was reduced to a 41 overs a side.

The West Indies were set a revised target of 230 runs, but a collapse upfront and later in the innings meant that they could only manage 190-9 from the stipulated 41 overs.

The hosts were on the back foot as they were reeling at 31-4 before a spirited 123-run partnership between Lendl Simmons (67) and Darren Bravo (70) rescued them, giving hopes of a win.

But as Simmons was holed out in the deep in search of big runs, wickets once again began to tumble foe the hosts with dangerous Kieron Pollard was sent back by Lasith Malinga for nought.

The West Indies ended the league stage of the competition with two wins from four games, managing nine points. 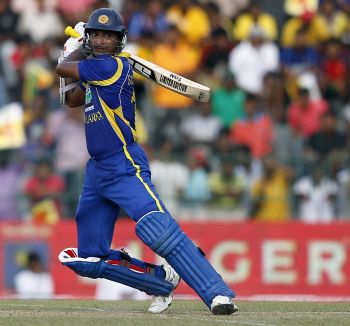 Sri Lanka too have nine points but have a better run rate and game in hand. They play India on Tuesday ahead of the final July 11. India have five points from three games and find themselves in a must win situation.

West Indies' chase was derailed by some good bowling by Sri Lankan bowlers -- especially Angelo Mathews and Shaminda Eranga -- who reduced the hosts to 31 for four in 8.2 overs.

Skipper Mathews stuck the first blow in the 5th over when he had the dangerous Chris Gayle (14) caught at deep point, while pacer Eranga dismissed other opener Johnson Charles (14) and Marlon Samuels (0) in his third over.

Trying to pull one from just outside off, Charles ended up giving a return catch to Eranga, while Samuels was caught by Mahela Jayawardene when he tried to play a back-foot drive and edged it to the slip.

Mathews came back to pick up his second wicket when he trapped newman Devon Smith in front of wicket. However, Simmons and Bravo steadied the innings and kept the hosts in the hunt with some good batting.

Earlier, a series of rain interruptions reduced the game to a 41-over a side affair but Sangakkara ensured that Sri Lanka have a good score on board as he set the foundation early on and then accelerated in the end, despite losing partners at regular intervals.

Skipper Angelo Mathews (30) and Lahiru Thirimanne (23) were the other contributors for Sri Lanka. 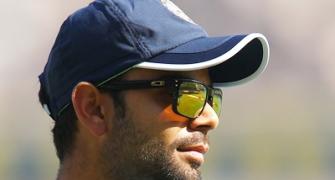 It was a tough day in office, says Kohli after the loss 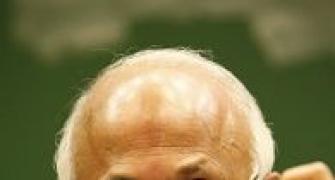 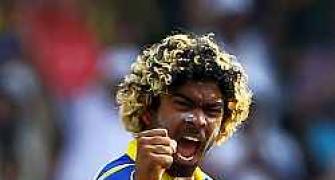 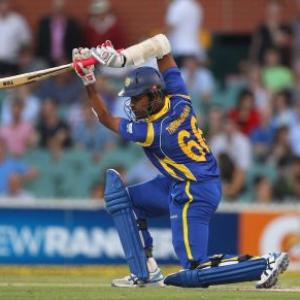 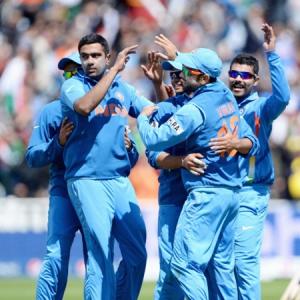