It has captured 38 per cent of the feature phone segment in 2018 through frequent innovation, says Arnab Dutta. Exceeding the expectations of analysts, Reliance's Jio Phone has emerged as the leader in the domestic handset market, cornering 21 per cent of it in 2018.

This is the first time an Indian brand has ended a year at the top of the charts.

Data from Counterpoint Research shows, in 2018, Jio captured 38 per cent of the feature phone market.

This catapulted it to the top spot in the overall handset market.

The strategy leading to its stunning growth owes a debt to Jio's performance in the telecom services market.

Since its entry into the handsets segment in late 2017, Jio Phone -- like the telecom service provider -- altered the dynamics of the market with frequent innovations.

The R-Jio and Jio Phone teams not only aided each other's growth but also made calling rates cheaper.

This has attracted users to opt for a Jio Phone as a secondary device.

Jio's emergence in the handset space has also brought good news for the feature phones market that traditionally caters to price-conscious and rural consumers.

The feature phones market, as a result, has grown faster than the smartphone market in 2018.

"This highlights that while India is a fast-growing smartphone market, feature phones remain relevant for a large section of the population," said Pathak.

The highly fragmented feature phone market, with over 500 brands struggling to survive, has seen significant consolidation is 2018.

Xiaomi is the king in the smartphone market 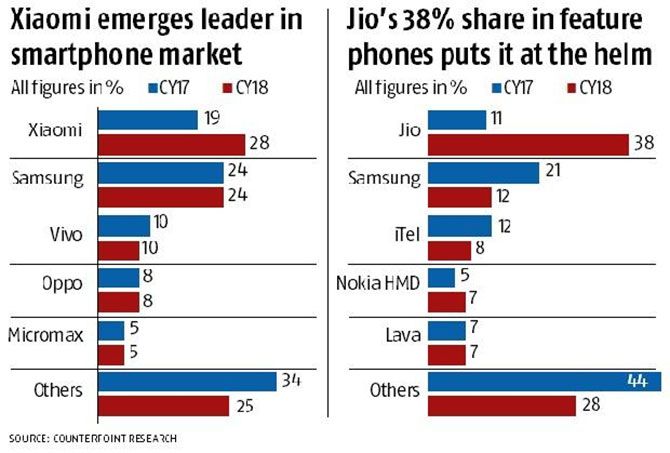 Xiaomi has, for the first time, emerged as the leader in the smartphone market for a full calendar year.

While the Chinese major has been at the top for the past six quarters, it is in 2018 that Xiaomi beat Samsung by capturing a 28 per cent share of the market.

The next three largest players -- Vivo, Oppo and Micromax -- also maintained the same market share in 2018, at 10 per cent, 8 per cent and 5 per cent respectively.

About 135 million smartphones were sold in 2018 -- beating all previous records.

India is already the second-largest smartphone market in the world after China.

While India has over 430 million smartphone users, according to estimates, that accounts for only 45 per cent of the potential market for smartphones. 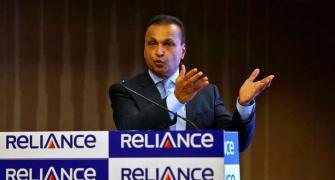