Currently, TCS is India's second most valuable firm after Reliance Industries, which has a market cap of nearly Rs 12.9 trillion. 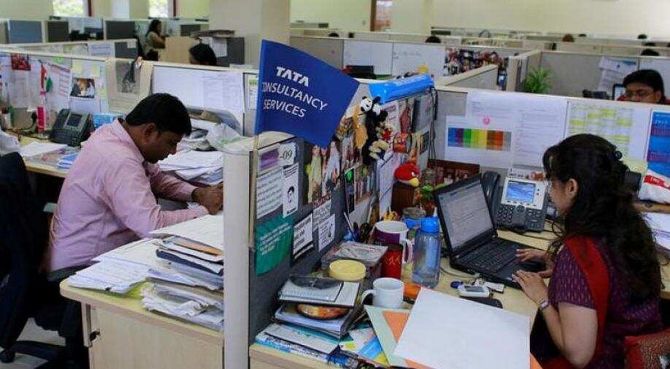 The market capitalisation (m-cap) of TCS on Thursday topped the Rs 12-trillion-mark for the first time.

TCS is India’s second-most valuable firm after Reliance Industries (RIL), which has an m-cap of nearly Rs 12.9 trillion (including m-cap of partly-paid up shares).

The IT services firm staged a solid comeback in Q2, and growth momentum continued in Q3 as the firm beat Street estimates on all key parameters such as revenue, margin and profits.

Investors are cheering the stock after it signalled a return to the double-digit growth trajectory in the next financial year, on the back of a ramp-up in large contracts and a strong order pipeline.

It had last achieved double-digit growth on a year-on-year (YoY) basis in June 2019.

TCS’s 7.2 per cent YoY growth in net profit to Rs 8,701 crore came in Q3, which is seasonally weak for Indian IT companies.

Growth in all key segments and geographies helped the company achieve the result.

TCS said this was its best Q3 performance in nine years.

Operating profit margins in the December quarter stood at 26.6 per cent — a rise of 160 per cent YoY, and were ahead of market expectations.

Brokerages have revised the profitability estimate for TCS, on the back of the third quarter beat.

CLSA increased its FY22 and FY23 earnings per share (EPS) estimates by 4 per cent and 2 per cent, respectively, and target price from Rs 3,070 to Rs 3,200, maintaining an ‘outperform’ rating.

“We believe TCS is poised to benefit from the acceleration in Cloud adoption and digital transformation opportunities, considering its end-to-end capabilities.

Sentiment towards Indian IT stocks has improved, with the companies benefitting from a pick-up in demand, advancement of digital transformation by clients, as well as increased deal wins.

Other brokerages have also raised their target prices.

The average target price of 39 analysts, polled by Bloomberg, following the results announcement, now stands at Rs 3,320 per share.

TCS and RIL have been playing cat-and-mouse for quite some time, in terms of claiming top spot for India’s most valuable company (see chart). 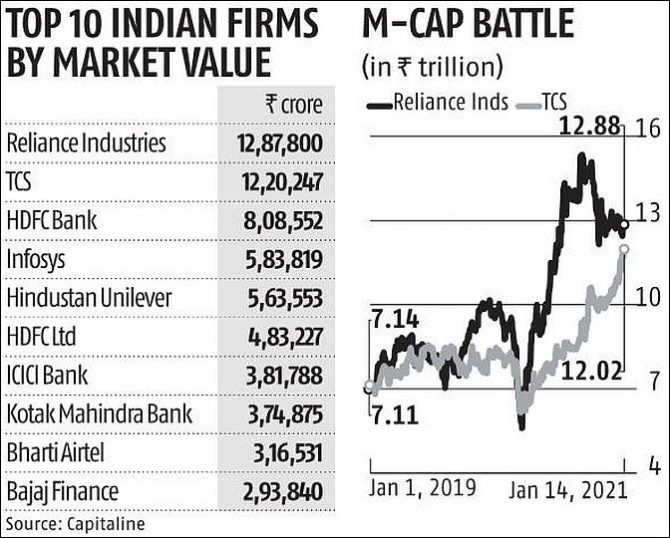 However, between April and October 2020, RIL shares galloped after the company’s successful mega fund raising — the largest by any Indian corporate — wherein it sold stakes in its digital (Jio) and retail arms, and also issued shares through a rights issue (Rs 53,000 crore) to shareholders, aggregating over Rs 2 trillion.

While the stake sales helped investors arrive at market-driven valuations for the firm’s consumer businesses, the uncertain growth environment due to the pandemic saw increased demand for stocks such as RIL, which are perceived to be safe havens.

Since October, with reducing uncertainty over economic growth and earnings, RIL has underperformed the benchmarks, while TCS has gained on an improved business outlook.

Consequently, the gap between the two has narrowed. TCS is now about Rs 85,800 crore behind RIL in market value.