The new rules are aimed at providing a strong impetus to the industry and positioning India as one of the most competitive IT jurisdictions in the world. 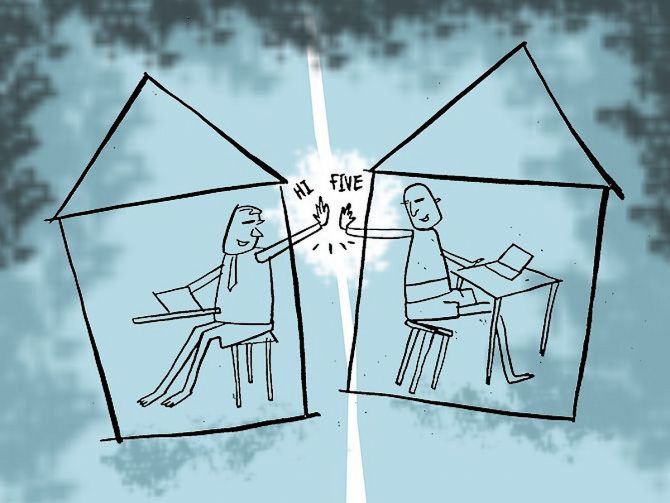 The government on Thursday announced simplified guidelines for Business Process Outsourcing (BPO) and IT Enabled Services (ITES) players to reduce the compliance burden for the industry and facilitate 'Work from Home' and 'Work from Anywhere'.

The new rules for 'Other Service Providers' (OSPs) would create a friendly-regime for 'Work from Home' and 'Work from Anywhere' while removing several reporting and other obligations for such companies.

The new rules are aimed at providing a strong impetus to the industry and positioning India as one of the most competitive IT jurisdictions in the world, an official release said.

The new regulations would boost flexibility for these companies to adopt 'Work from Home' and 'Work from Anywhere' policies, a development especially relevant at a time when COVID-19 has forced IT/BPO firms to enable employees to work from home.

The new rules also do away with registration requirement for OSPs, while the BPO industry engaged in data related work has been taken out of the ambit of the said regulations.

"India's IT sector is our pride. The prowess of this sector is recognised globally. We are committed to doing everything possible to ensure a conducive environment for growth and innovation in India.

An official release said that under the revamped guidelines, the requirements such as deposit of bank guarantees, requirement for static IPs, frequent reporting obligations, publication of network diagram, and penal provisions have also been removed.

"Similarly, several other requirements, which prevented companies from adopting 'Work from Home' and 'Work from Anywhere' policies have also been removed," the release said, adding that additional dispensations to enhance flexibility for the industry have been allowed.

"With an aim to qualitatively improve the Ease of Doing Business of the IT industry particularly Business Process Outsourcing and IT Enabled Services, the government has drastically simplified the Other Service Provider guidelines of the Department of Telecom.

“The new guidelines tremendously reduce the compliance burden of the BPO industry," the release added.

It further said that the new guidelines are aimed at removing "unnecessary bureaucratic restrictions" in order to allow the industry to focus on innovative new products and solutions.

"With this reform, the Government of India sends out a strong signal of its support to the IT industry with a view to encouraging increased investment in the sector.

"The reform will certainly unleash the potential of our talented youth by making India as a preferred destination for Information and Knowledge Outsourcing Industry and would further the vision of 'AtmaNirbhar Bharat'," the release added.

Communications and IT Minister Ravi Shankar Prasad tweeted, "Today @narendramodi Govt has taken a major reform initiative to liberalize the regulatory regime for “Other Service Provider”.

“This will boost the IT/ ITeS/ BPO industry and create a friendly regime for Work from Home in India."

Nasscom termed the move as a bold reform for ITES/BPO players.

"These will provide several benefits...India is a global outsourcing hub and the new guidelines will promote outsourcing at scale, bringing in more work to India.

“With the relaxations in WFH regulations, companies will be able to tap into talent from small towns and remote parts of the country," Nasscom senior director and public policy head Ashish Aggarwal said.

Overall, the new guidelines offer further clarity and will bring in ease of doing business, he added.

Nasscom president Debjani Ghosh tweeted that the "game changing reform" signals start of a new chapter for Indian IT and for India as a leading IT hub for the world.

WNS Group CEO Keshav Murugesh tweeted that this "brilliant step" will catapult Indian IT and BPM to the next level of growth, global impact, job creation and development of small towns and cities in tier III and IV locations.