A Kashmiri verse, quotes from Tamil poets and references to Saraswati-Sindhu civilisation peppered Finance Minister Nirmala Sitharaman's 160-minute long marathon Budget speech on Saturday which got cut short at the fag end after she felt unwell. 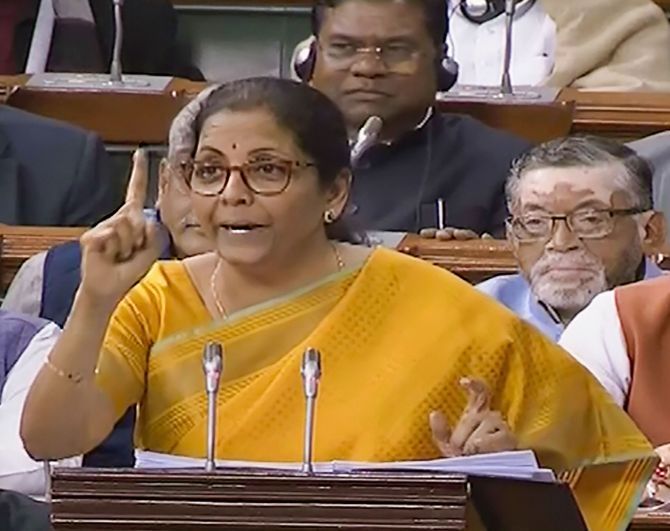 As the minister, clad in a bright yellow sari with a light green border, delivered the longest Union Budget speech ever, some of her remarks, including regarding 'Beti Bachao Beti Padhao' programme, were met with protests from the Opposition benches.

Her first Budget speech in July 2019 went on for around 137 minutes.

Once again, she carried the budget documents in the traditional 'bahi khata'.

She recited a Kashmiri verse, which was part of a poem by Sahitya Akademi award winner Pandit Dinanath Koul. She rendered the verse in both Kashmiri and Hindi.

Besides, the minister quoted woman Tamil poet Avvaiyar, Tamil poet Thiruvalluvar, a verse from Raghuvamsa by Kalidasa, as well as late finance minister Arun Jaitley while talking about the Goods and Services Tax (GST).

Many of the announcements, including reduction in personal income tax rates, were welcomed with thumping of desks by the Treasury benches.

Prime Minister Narendra Modi too joined the members in the applause.

When the finance minister mentioned that 'between 2006-16, India was able to raise 271 million people out of poverty, which we all should be proud of', there was a round of applause.

Aspirational India, economic development for all and caring society were the prominent themes around which the Budget has been woven, she said.

In the first row of seats, Sitharaman was flanked by Union ministers Sadanand Gowda and Nitin Gadkari. Union Home Minister Amit Shah was also sitting in the same row.

On to the left of Shah were Defence Minister Rajnath Singh and Prime Minister Narendra Modi.

After around 150 minutes, Sitharaman appeared tired and sipped water at least thrice before cutting short her speech.

In between when a staff member went to get a glass of water, Sitharaman took a candy that was offered by Gadkari.

Ministerial colleague Harsimrat Kaur Badal also came up to the finance minister and offered her a candy.

Rajnath Singh and Amit Shah were also seen talking to her.

Unable to continue, she told the Speaker to consider the rest of the speech as laid in the House and sat down.

Soon after the proceedings were adjourned, Modi walked up to her and greeted her.

Several ministers, including Piyush Goyal and Smriti Irani, and various members, including from the Congress, too were seen asking Sitharaman about her health.

Before leaving the House, Sitharaman waved at her family members who were in the gallery.

Her daughter Vangmayi Parkala and three other family members were in the House for the speech.

Some members from the Opposition, including the Congress and the Trinamool Congress, protested against certain remarks, including the plan to sell stake in state-owned LIC and projection of 10 per cent nominal GDP growth in 2020-21.

In response to the protests following her remark that 'Beti Bachao Beti Padhao' programme has yielded tremendous results, Sitharaman said women-related issues should not be politicised.

Noting that Saraswati-Sindhu civilisation and Harappan seals were remarkable, Sitharaman said commerce and trade related words show how India has been rich in skills, metallurgy and trade for millennia.

As some Opposition members objected to the references, she said that many know about it, so they are a bit restless.

Congress President Sonia Gandhi and Samajwadi Party patriarch Mulayam Singh Yadav were among those conspicuous by their absence in the House.

Rajya Sabha Deputy Chairman Harvansh Narayan Singh, and many other Upper House members, including Alphons Kannanthanam and Vaiko, were sitting in the gallery. 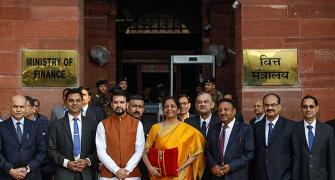 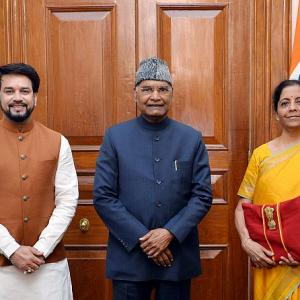 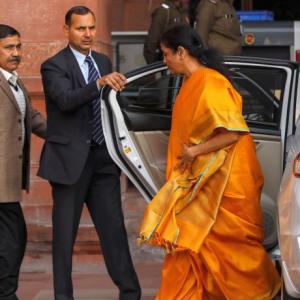