Budget will play a critical role in reviving growth: Economists

Measures that quickly boost demand and increase employment are needed to push up growth. Moreover, without announcing new planss, the government should strengthen schemes such as PM KISAN, MNREGA and programmes to build rural roads.

Economists believe the upcoming Union Budget will play a critical role in reviving economic growth, which might anyway not go beyond six per cent even in the best case scenario in financial year 2020-21 (or FY21).

Former chief statistician Pronab Sen said economic revival depends on what the government does in the Budget.

When asked whether the measures already taken by the government such as cut in corporation tax rate would perk up growth, Sen said lower tax rates would not have an impact on economic growth.

“Any cut in personal income tax rates would also not have much impact on perking up growth,” Sen said.

According to him, measures that quickly boost demand and increase employment are needed to push up growth.

“Even in the best case scenario, economic growth will not increase beyond six per cent.

"If these measures are not taken, growth will hang around five per cent even in FY21," Sen said.

Eminent economist Sudipto Mundle, who was part of various panels of the statistics office, said economic growth would depend much on what government does to boost growth, but real recovery might have to wait for two years.

“The Budget is quite critical in that sense,” Mundle said.

When asked whether the government should stick to its fiscal deficit target or boost the economy, Mundle said this was a false choice.

There are ways to boost expenditure without compromising on the deficit target.

For this, the government would have to augment revenues by curbing exemptions, toning up administration including the Goods and Services Tax (GST) network, he said.

If that is reduced, GDP could be perked up without impacting fiscal deficit.

If these measures are taken, growth could be revived from FY22 to six per cent or more.

For the next financial year, the economic growth would be quite low.

Though advance estimates pegged economic growth at five per cent for FY20, Mundle believes that it will be less than that.

It is likely to be five per cent, give or take 0.5 percentage point, depending on the global situation and domestic uncertainties, including social unrest.

N R Bhanumurthy, professor at National Institute of Public Finance and Policy (NIPFP), however, said growth could have recovered next financial year, but escalating tensions between US-Iran has dimmed that hope.

He said measures taken by the government, including corporation tax rate cuts and liberalisation of foreign investments coupled with monetary easing by the RBI, would have a positive impact on economic growth next fiscal year. 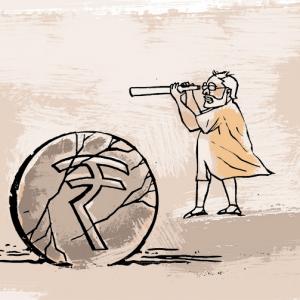