The Reserve Bank of India on Thursday opted for a status quo on benchmark interest rate after the Union Budget for 2020-21 slipped on fiscal deficit target and there were signs of hardening inflation amid an uncertain global environment. 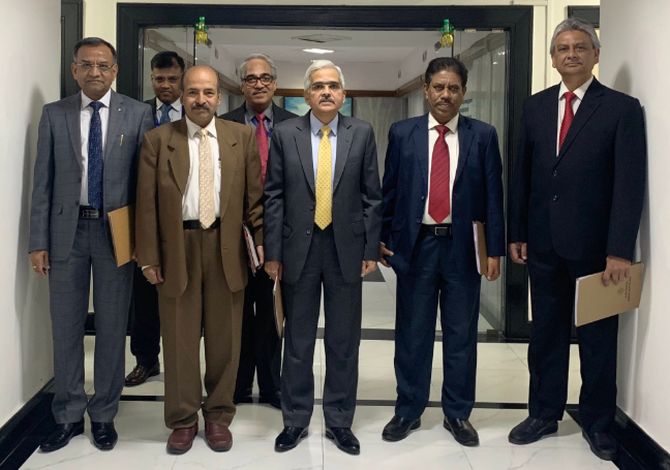 The six member-Monetary Policy Committee headed by RBI Governor Shaktikanta Das, for the second meeting in a row, kept repo rate unchanged at 5.15 per cent but maintained an accommodative policy stance which implies it was biased in favour of cutting rate to boost growth.

RBI kept GDP growth rate unchanged for the current fiscal at 5 per cent and projected a pick-up in growth to 6 per cent in the next financial year.

The MPC upped its inflation outlook for the second half of the next fiscal by 0.30 per cent to 5.4-5 per cent and termed the outlook on price rise as "highly uncertain".

"Economic activity remains subdued and the few indicators that have moved up recently are yet to gain traction in a more broad-based manner. Given the evolving growth-inflation dynamics, the MPC felt it appropriate to maintain status quo," the MPC said.

The six-member committee voted unanimously to hold rates but also said that there is "policy space available for further action".

In a comment on the budget proposals, it said, "The rationalisation of personal income tax rates in the Union Budget 2020-21, should support domestic demand along with measures to boost rural and infrastructure spending."

It said though there has been a 0.50 per cent fiscal slippage in FY20, that has not increased the market borrowings, and also noted that the government has budgeted for a Rs 70,000 crore increase in the gross borrowings in FY21, when it has managed to crimp the fiscal gap to 3.5 per cent.

However, in the current year, the government will miss the fiscal deficit target of 3.3 per cent as it witnessed shortfall in tax revenue due to economic slowdown and a cut in corporate tax rate.

"The Union Budget 2020-21 has introduced several measures to provide an impetus to growth. While the emphasis on boosting the rural economy and infrastructure should help the growth momentum in the near-term, the corporate tax rate cuts of September 2019 should help boost the growth potential over the medium-term," it said.

There is a need for "adjustment" in interest rates on small saving schemes, the MPC said, adding that the external benchmark system adopted from October 1, has strengthened monetary policy transmission.

The government is likely to revise small savings rate downward in the coming quarter beginning April.

As per the government's suggestion, it also decided to extend the one-time restructuring to small enterprises.

On food price rise, it said onion prices are expected to ebb going forward. However, there is a likelihood for the prices of other food commodities to go up.

"The salutary effects on headline inflation are, however, likely to be tempered by hardening of prices of other food items, notably those of pulses and proteins," it said.

It also pointed to the push to headline inflation number coming from telecom prices, adding that trajectory of inflation excluding food and fuel needs to be carefully monitored as the pass-through of remaining revisions in mobile phone charges, the increase in prices of drugs and pharmaceuticals and the impact of new emission norms play out and feed into inflation formation.

"The MPC will remain vigilant about the potential generalisation of inflationary pressures as several of the underlying factors cited earlier appear to be operating in concert," it said.

The MPC was expected to go in for a second consecutive status quo in rates as the inflation has zoomed beyond the central bank's comfort level.

Given Governor Das's commentary in December after delivering the surprise pause which ended a series of rate cuts after five actions of a cumulative 1.35 per cent decline in repo rate, it was also expected that the RBI will continue with the dovish stance to push growth.

The headline inflation came at 7.3 per cent in December, and many analysts have estimated it to print at over 7 per cent for January as well. The RBI has itself raised its target on the number at the December review to up to 4.7 per cent in the second half.

Under the mandate received from the government, the RBI has committed to maintain inflation at 4 per cent in the medium term with a two percentage point flexibility on either end.