The Modi 2.0 government's maiden Budget Friday hiked petrol and diesel prices, raised import duty on dozens of items and increased tax on the super-rich as it sought to spur growth through higher spending and sops for startups, housing and corporates. 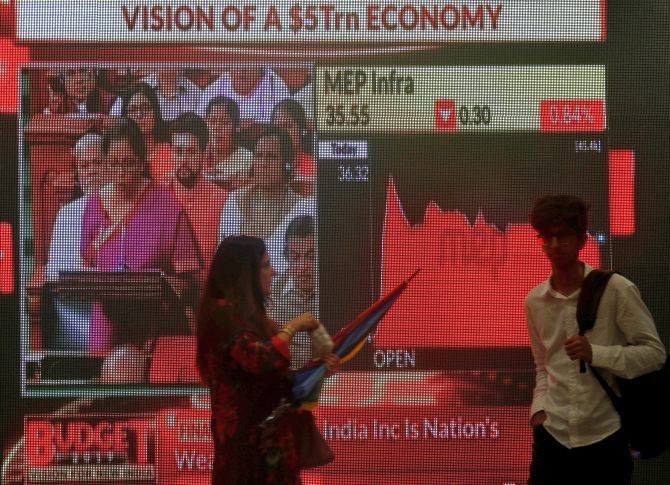 IMAGE: People walk as a telecast of Finance Minister Nirmala Sitharaman presenting the budget is displayed inside the Bombay Stock Exchange building in Mumbai. Photograph: Francis Mascarenhas/Reuters
Presenting the Budget for 2019-20, Finance Minister Nirmala Sitharaman announced further opening up of aviation, insurance and media sectors to foreign investment while throwing a lifeline to the struggling shadow banks to boost investment and lending in the economy.

She made no changes to the income tax slabs but hiked surcharge on the super-rich. Those with a taxable income of Rs 2 to 5 crore will now pay 39 per cent tax while those with more than Rs 5 crore income would pay 42.47 per cent.

"Those in the highest income brackets need to contribute more to the nation's development," she said.

Also, 2 per cent TDS on cash withdrawals exceeding Rs 1 crore and mandatory filing of returns by certain category of individuals was brought in with a view to tighten compliance.

With sluggish growth in tax revenues, she announced plans to sell stakes in public sector undertakings and sought more dividend from the Reserve Bank of India and public sector banks and companies in order to boost revenue and bring down the deficit. For the same, excise duty and cess on petrol and diesel were hiked by Rs 2 per litre each and import duty on dozens of items ranging from gold to automobile parts and tobacco products was increased.

The customs duty on gold has been increased to 12.5 per cent from 10 per cent.

Sitharaman said the reduced tax rate would cover 99.3 per cent of corporates in the country.

The Budget also sought to boost 'Make in India' by way of reducing duties on certain inputs and raw materials and creating a level playing field by increasing duties on certain goods. Emphasis has also been placed on promoting electrical mobility by reducing customs duty on parts used to manufacture electric vehicles.

While customs duty on some parts used in EV manufacturing has been brought down to nil, the GST rate on electric vehicles will be lowered to 5 per cent from 12 per cent.

To boost the use of electric vehicles, an additional income tax deduction of Rs 1.5 lakh on interest paid on loans taken to purchase EVs has been proposed. 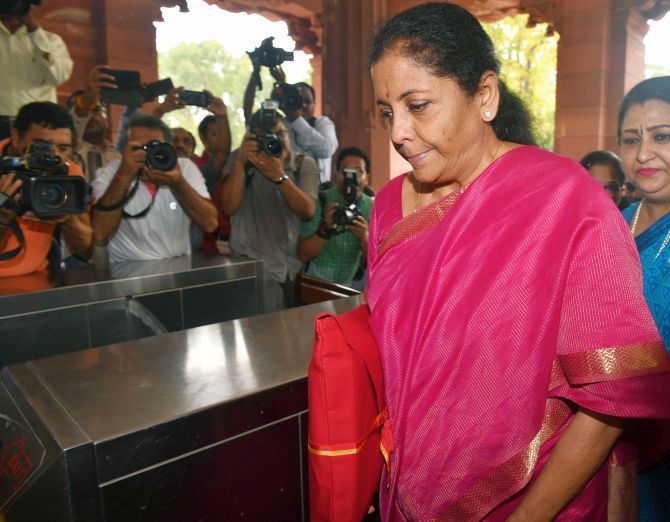 "The Indian economy will grow to become a $3 trillion economy in the current year (from $2.7 trillion last year). It is now the sixth largest in the world," she said, adding the target is to take it to $5 trillion in coming years. "This budget is setting out a vision, a target, for every sector of our society."

Sitharaman surprised most analyst by narrowing the budget deficit target to 3.3 per cent of the GDP for the current fiscal from 3.4 per cent previously.

In addition to funding an expansion of cash support scheme for farmers, a new pension scheme and relief for small taxpayers, as previously announced, the Budget includes a Rs 70,000 crore capital infusion in public sector banks.

First-time homebuyers, buying a house not exceeding Rs 45 lakh, would get an additional deduction of Rs 1.5 lakhs towards interest.

For NBFCs, she announced measures to improve their access to funding by providing a limited backstop for purchases of their assets. The government will provide a partial guarantee to state banks for the acquisition of up to Rs 1 lakh crore of highly rated assets from non-bank finance companies.

Also, the Reserve Bank of India will take over as the regulator of housing finance firms, replacing the National Housing Bank, she said. 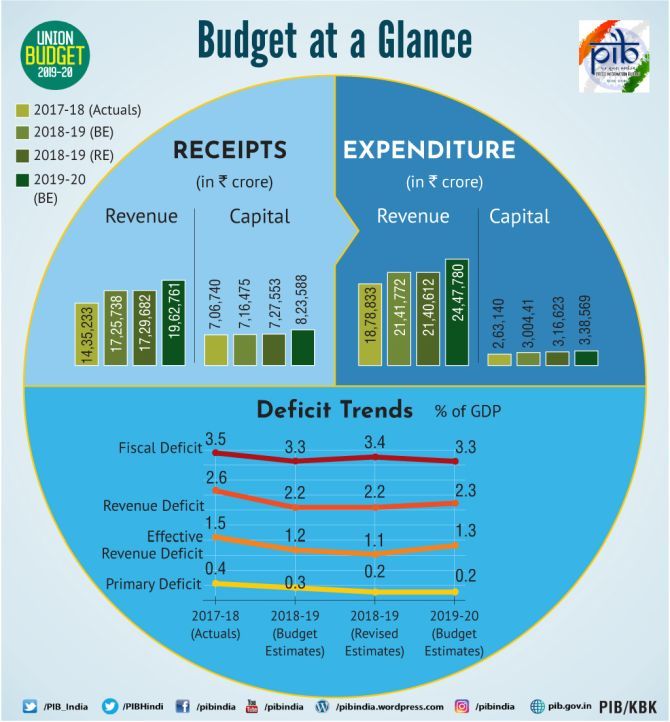 Sitharaman, who in the first term of the Narendra Modi government was the defence minister, exempted some defence equipment from basic customs levy. She also said the government would allow more foreign investment in the insurance and media industries.

The government will also sell its first global bond to raise funding for infrastructure spending.

Meanwhile, opposition Congress described the Budget as "insipid", saying it belied expectations and gave no "meaningful relief" to any section of the society.

Moody's said there are risks of India missing 3.3 per cent fiscal deficit target for the current financial year if tax revenue falls short of projection.

"In today's budget, India's government announced a lower fiscal deficit target for fiscal 2019, while maintaining its support for growth and incomes. Achieving these competing goals will be very challenging. We expect the economy to grow relatively slowly, despite the government's income support measures," it said. 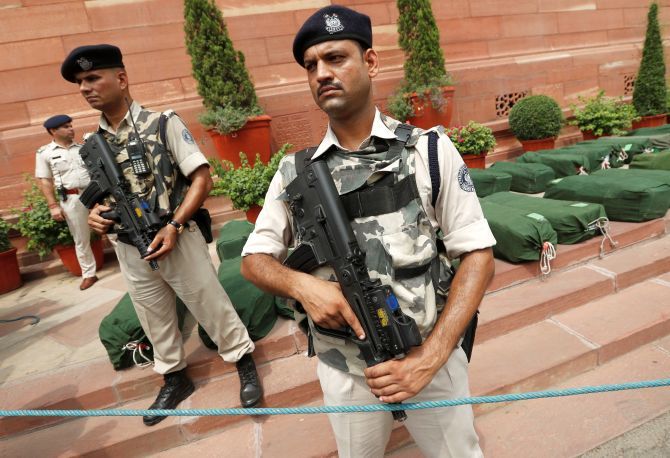 The Finance Bill proposed to bring about several changes in taxation to remove pain points of companies undergoing insolvency resolution. The losses of the company would be allowed to be carried forward despite the change in shareholding of more than 49 per cent, albeit with conditions.

Giving relief to startups, she said they will not be subject to 'angel tax' scrutiny where the companies and investors file certain declarations. A mechanism of e-verification will be put in place and with this, the funds raised by startups will not require any tax scrutiny.

She also said the government will spend Rs 100 lakh crore for infrastructure in the next five years.

Source: PTI© Copyright 2022 PTI. All rights reserved. Republication or redistribution of PTI content, including by framing or similar means, is expressly prohibited without the prior written consent.
Related News: Nirmala Sitharaman
Print this article 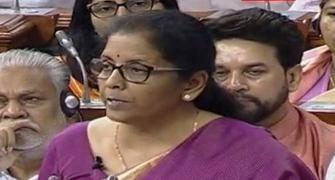 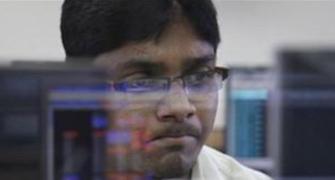