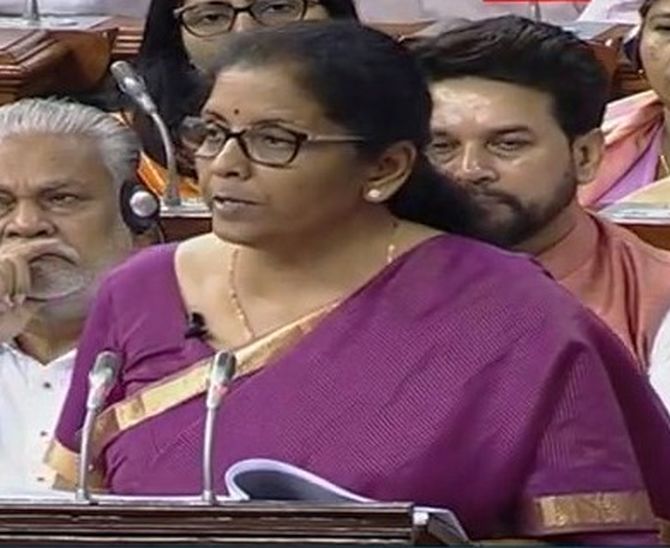 Finance Minister Nirmala Sitharaman on Friday became only the second women in the history of independent India to present the Union Budget.

Prior to the presentation, the Union Cabinet headed by Prime Minister Narendra Modi approved the Budget for 2019-20.

She handed over a copy of the Union Budget to President Ram Nath Kovind before her maiden budget speech.

Breaking away from the brown Budget briefcase, Sitharaman held a red parcel like bag with a key hole on the emblem.

In 1970, she presented the Union Budget of India for 1970-71, after she took over the finance portfolio following the resignation of Morarji Desai as finance minister.

Gandhi held the portfolio for a year before appointing her home minister, Yashwantrao Chavan, as finance minister.

Morarji Desai holds the distinction of presenting the most number of budgets -- 10.

Sitharaman's will present the 29th budget (excluding interim ones) post economic liberalisation in 1991.

In the post-liberalisation era, Chidambaram presented the most number of budgets at eight. Manmohan Singh, Yashwant Sinha and Arun Jaitley presented five budgets each while Pranab Mukherjee presented four. Jaswant Singh presented only one budget.

Jaitley presented all the five Budgets of the Modi government's first tenure but missed out on presenting the interim budget in February this year due to ill-health. Stand-in finance minister Piyush Goyal presented the pre-general election interim budget on February 1 this year.

Source: PTI© Copyright 2022 PTI. All rights reserved. Republication or redistribution of PTI content, including by framing or similar means, is expressly prohibited without the prior written consent.
Related News: Indira Gandhi, Nirmala Sitharaman, Union Budget, Chidambaram, Arun Jaitley
Print this article
How Modi can rescue the economy
No knights in shining armour on the horizon
Two major tasks for Sitharaman