The total salary and pension bill of the central government, which will also include Railway employees, will go up from estimated Rs 4.33 lakh crore to Rs 5.35 lakh crore during 2016-17 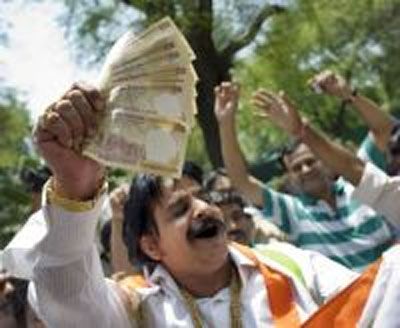 In a big bonanza to central employees and pensioners, the Seventh Pay Commission on Thursday recommended a 23.55 per cent increase in salary, allowances and pension along with a virtual one-rank-one-pension for civilians, involving an additional outgo of Rs 1.02 lakh crore a year.

A minimum pay of Rs 18,000 per month and a maximum of Rs 250,000 lakh per month has been recommended by the Commission, headed by Justice A K Mathur that presented its 900-page report to Finance Minister Arun Jaitley in New Delhi.

The recommendations, which are to be implemented from January 1, 2016, will benefit 47 lakh central government employees and 52 lakh pensioners.

The award of the pay panel will also benefit staff of autonomous bodies, universities and public sector units, Jaitley said after receiving the report.

"In percentage terms, the overall increase in pay and allowance and pensions over the business-as-usual scenario will be 23.55 per cent," the report said. Within this, the increase in pay will be 16 per cent, in allowances 63 per cent and in pension would be 24 per cent, it said.

The total salary and pension bill of the central government, which will also include Railway employees, will go up from estimated Rs 4.33 lakh crore to Rs 5.35 lakh crore during 2016-17.

The panel has suggested abolition of the pay band and the grade pay, though it retained the annual increment of 3 per cent.

It has also recommended a fitment factor of 2.57 which will be applied uniformally to all employees.