Brent crude oil prices fell towards $48 a barrel on Tuesday after the International Monetary Fund cut its forecast for global economic growth in 2015 implying lower demand for fuel. 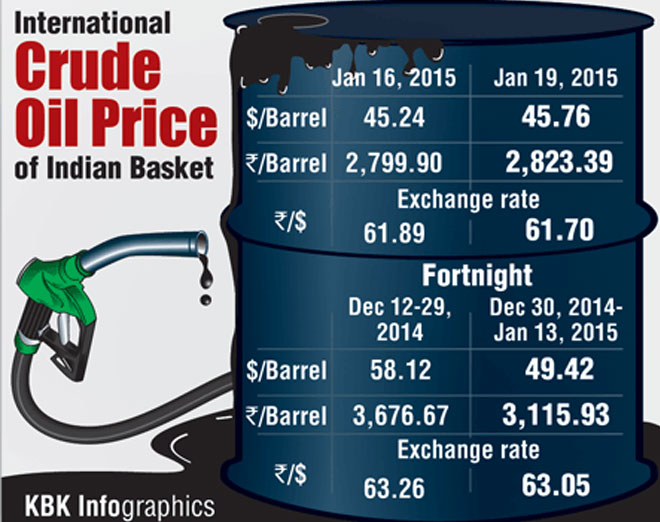 Global growth is projected at 3.5 per cent for 2015 and 3.7 per cent for 2016, the IMF said in its latest World Economic Outlook report, reducing its forecast by 0.3 per centage points for both years.

Oil prices have dropped by more than half since June as output has soared while demand growth has slowed.

Saudi Arabia and other members of the Organization of the Petroleum Exporting Countries have said they are leaving the oil market to find its own level and hope lower fuel prices will stimulate more demand in the long run.

But Olivier Jakob, oil analyst at Petromatrix in Zug, Switzerland, said that strategy may not work:

"If Saudi Arabia thinks that the lower oil price will revive global oil demand, the IMF does not have the same view."

The world's second-largest economy and biggest energy consumer grew 7.4 per cent last year, China's National Bureau of Statistics said, less than the target of 7.5 per cent and its weakest annual expansion in 24 years.

Growth in the fourth quarter held at its weakest in nearly six years, although coming in slightly better than expected at 7.3 per cent.

China's implied oil demand grew 3 per cent in 2014, consuming roughly 10.06 million barrels per day (bpd) of oil in 2014, according to Reuters calculations.

It was the first year the implied oil demand figure broke 10 million bpd, and came as China lifted its refining capacity roughly 600,000 million bpd and crude imports continued to grow.

Recent price falls have steepened the price difference between oil for immediate delivery and for barrels for supply at a later stage, known as a contango.

Brent's contango between deliveries in March this year and a year later is around $10 per barrel.

© Copyright 2020 Reuters Limited. All rights reserved. Republication or redistribution of Reuters content, including by framing or similar means, is expressly prohibited without the prior written consent of Reuters. Reuters shall not be liable for any errors or delays in the content, or for any actions taken in reliance thereon.
Related News: IMF, China, National Bureau of Statistics, Saudi Arabia, World Economic Outlook
SHARE THIS STORY
Print this article