News
Business
Movies
Sports
Cricket
Get Ahead
Money Tips
Shopping
Sign in  |  Create a Rediffmail account
Rediff.com  » Business » 'Modiji, the poor are not sleeping in peace'

'If you want proof, visit any bank in Mumbai and you will find the poor standing in bank queues.'
'They are queuing up from midnight outside the banks.'
Rediff.com's Syed Firdaus Ashraf reports.
Illustration: Uttam Ghosh/Rediff.com. Video: Hitesh Harisinghani for Rediff.com 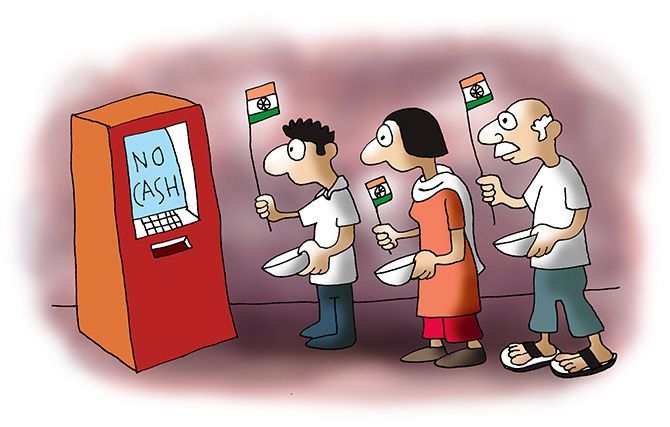 As Indians standing in a queue outside a bank in north-central Mumbai heard on Thursday that the government had reduced the limit on the exchange of Rs 500 and Rs 1,000 banknotes from Rs 4,500 to Rs 2,000 per day, their level of disappointment grew.

Although they could get Rs 4,500 on Thursday, the new limit kicking in from Friday, many said, even that amount was not enough.

"I am not from Mumbai. I am from Bihar and I do not have a bank account in Mumbai. The only option I had was to exchange my old notes, but even that amount is being reduced. This is a very bad step," Sohail Khan felt.

Khan, like many others in the queue, had been waiting for three hours.

Khan hailed the government's decision to curb black money, but felt severe hardship confronts the public at the moment.

"I have come to Mumbai to go to the Gulf for a job. I have to undergo medical tests. I have to pay for the tests and then stay here for two more days. How will I survive on Rs 4,500 till then? Khan wondered.

"For how long will a family of four, which does not have a bank account, survive on Rs 2,000?" asked Rajesh Sawant, a labourer from Malvan, coastal Maharashtra.

"For how long will this money last?" he asked. "In three days, that money will be be finished."

Nodding in agreement with Sawant, Tanveer Alam said, "It is an anti-poor decision by the Modi government. If you have a family of eight, how will you run the house on just Rs 2,000?"

"I feel the exchange limit should have been Rs 5,000 per day. Poor people don't have bank accounts, why does Modiji not understand this?" Alam asked.

"Daily wage workers like me are suffering the most from this (demonetisation," Alam added. "There is no work because people do not have the money to pay us in new notes and all our old currency has become useless."

"Some people have not opened a Jan Dhan account," Sawant added. "Does it mean they have to go through this hardship? Where will they go? Poor men are getting harassed a lot the past week."

"Modiji is doing good work, but the fact is you don't see a rich man standing in the queues. The poor are suffering because they have to skip work to get money from the banks. I'm not going to get today's salary because I won't be able to report to work on time."

"The war on black money is good," Sawant said. "Unfortunately in this war, there is complete chaos on the ground and poor people suffer the most."