With the shock demonetisation move in the middle of marriage and sowing seasons causing hardships, the government on Thursday eased restrictions on cash withdrawal by farmers and families with upcoming weddings but more than halved the limit at Rs 2,000 for exchange.

However, with effect from Friday individuals can exchange invalid 500 and 1,000 rupee notes totalling Rs 2,000, as against Rs 4,500 earlier, only once till December 30.

Besides, farmers who have taken crop loan or have kisan credit card can withdraw Rs 25,000 per week. Also those who have got payments through RTGS or cheque deposit in KYC compliant bank account can withdraw an additional Rs 25,000 a week. This takes the total cash withdrawal limit for farmers from KYC complaint bank accounts to Rs 50,000 per week.

Prime Minister Narendra Modi had on November 8 surprised citizens by announcing demonetisation of 500 and 1000 rupee notes and since then large number of seemingly unending queues before banks and post offices are seen in order to exchange these currencies.

Das said ever since the demonetisation announcement was made, a lot of representations have come to prime minister and Finance Minister Arun Jaitley to ease withdrawal norms for wedding purposes.

"It has been decided that for wedding ceremonies which are going on, up to Rs 2.50 lakh will be permitted to be drawn from the bank account... and that has to be drawn one person per marriage and can be drawn either from the account of the father or the mother or the account of either of the boy or girl, who are getting married, and these accounts naturally will have to be KYC compliant," he said.

Das said PAN details would have to be mentioned for such withdrawals and a self declaration also will be obtained that the money has been drawn only from one account. To ensure sufficient availability of notes in ATMs, Das said, cash is being supplied in every way possible and the government and Reserve Bank have made a contingency plan.

"The task force for making cash available in ATMs have prepared a roadmap. The maximum area will be progressively calibrated... If we receive any report on any shortage of cash, we are quickly sending cash there," he said.

Following the demonetisation of 500 and 1,000 rupee notes, new bills of Rs 500 and 2,000 have been introduced. However, the ATMs need to be recalibrated to dispense these new notes of different design and colour.

As per estimate, it would take about a week to recalibrate about half of 2 lakh ATMs in the country.

Asked whether the government is scaling up printing of 100 rupee notes, Das said, "Notes have been printed as per action plan... People are working in three shifts, so full capacity production is going on."

With regard to farmers, Das said with the commencement of rabi season there was a need to ensure adequate cash is available with the farmers to buy agriculture inputs and fertiliser, and facilitate smooth procurement process as also help farmers to sell their produce without any difficulty.

Besides, the government has also extended the deadline for payment of crop insurance premium by 15 days and permitted APMC-registered traders to withdraw up to Rs 50,000 per week.

"The government has decided to permit the farmers to draw up to Rs 25,000 per week against the crop loan sanctioned and credited to their accounts, subject to the limits...and this will also apply to Kisan Credit Cards," he said.

Besides, if the farmers receive payments either by way of cheques or RTGS into the bank accounts, they can withdraw up to Rs 25,000 per week, Das said.

Similarly, the registered traders with the Agricultural Produce Marketing Committee markets also will be permitted to draw Rs 50,000 per week to meet various cash requirements like payment of wages to workers and other sundry expenses.

The government has also allowed its Group C employees, including from PSUs, defence and railways, to get salaries up to Rs 10,000 in cash in advance which will be adjusted against their November salary. "It is expected that this will relief pressure on banks," Das said.

Following the demonetisation on November 8, the government allowed withdrawal of up to Rs 24,000 per week per person through cheque and Rs 2,500 from ATM.

Source: PTI© Copyright 2021 PTI. All rights reserved. Republication or redistribution of PTI content, including by framing or similar means, is expressly prohibited without the prior written consent.
Related News: Shaktikanta Das
Print this article 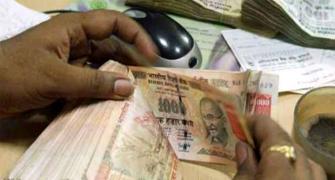 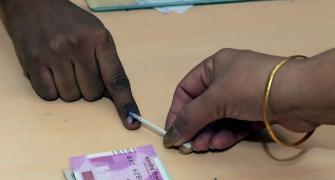