Lamp that runs for 8 hours on water and salt 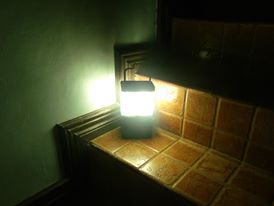 A new cost effective lamp that burns for eight hours at a time, running on nothing but a glass of water and two tablespoons of salt has been developed by a start-up in the Philippines.

The Sustainable Alternative Lighting or SALt lamp will also be able to generate enough energy to charge a smartphone through a USB cable, while also lighting up the room.

The lamp works with a galvanic cell battery, which consists of an electrolyte solution -- the salt and water -- and two electrodes.

When the electrodes are placed in the electrolyte, the energy generated kicks an LED light into gear.

The battery will work for eight hours a day for six months, which is a considerable upgrade from the constant refills required by paraffin lantern, the developers said.

"Use the ocean-water to power up your lamp and it will give you eight hours of running-time," the SALt team said on its website.

The team say the lamp is safe as there are no materials and components inside the lamp that may cause fire accidents.

"There are over 7,000 islands in the Philippines and most of these islands do not have access to electricity.

“We want to eliminate the sustaining cost in areas that rely on kerosene/battery powered lamps and candles as their main source of lighting," the SALt team said.

"And to provide a more efficient light source for people who use lamps and candles as an alternative source of lighting," it said.

Source: PTI© Copyright 2022 PTI. All rights reserved. Republication or redistribution of PTI content, including by framing or similar means, is expressly prohibited without the prior written consent.
Related News: USB, Philippines, LED
Print this article