Gold loan disbursals by NBFCs are on the rise

A customer can get a loan within half an hour if he has the gold and Know Your Customer (KYC) documents ready, reports Tinesh Bhasin.

Despite going slow on loans across all categories, non-banking financial companies have started lending aggressively against gold in the recent months.

Fresh loan disbursements have slowed down among NBFCs due to tighter liquidity conditions.

Many of them are struggling to raise funds.

Gold loan disbursements, however, have been rising continually in the past four quarters.

It jumped 44 per cent in the January-March quarter of the financial year (FY) 2018-19 compared to the previous quarter, according to data from CRIF High Mark -- one of the four credit bureaus in the country.

The jump quarter-on-quarter is significant as the liquidity crisis in NBFCs started around the beginning of the third quarter (October-December) of the previous financial year.

Industry experts feel that the rise in disbursal of gold loans is due to the NBFC liquidity crisis.

He further explains: "NBFCs may not face much challenge related to asset-liability mismatch in gold loans -- the trigger for the liquidity squeeze -- and may have been comfortable lending in this segment."

Also, in the fourth quarter of FY2018-19, gold prices started going up.

Towards the end of January, it started rising and went above Rs 33,000 per 10 grams in February.

"The jump would have incentivised the consumers to use gold for raising money," says Garg.

"Many business persons used gold to raise funds for business as there was little unsecured credit available for them," points out Gaurav Gupta, co-founder and CEO, MyLoanCare.in.

Gold loan is the quickest and easiest.

A customer can get a loan within half an hour if he has the gold and Know Your Customer (KYC) documents ready.

A borrower can opt for regular equated monthly instalment (EMI).

There is another option where the borrower pays interest portion as EMIs and the principal in full at the time of maturity.

Typically, a regular EMI option is best suited for salaried individuals who are capable of paying uniform EMIs.

A business person can choose from other options based on their cash flows assessment.

Also, those taking a large loan should ideally opt for regular EMI or amortised loan.

For small loan value, borrowers can opt for bullet repayment, where the principal is paid at the end of the tenure.

Lenders have also started offering overdraft facility against the loan, which is ideal for business persons.

They can save on the interest cost under this option as they need to repay only for the amount they have used.

"In most such cases, borrowers are unable to repay the loan and lenders reserve the right to auction the gold," says Gupta.

Some lenders are more aggressive in auctioning in case of default.

According to the regulations, an auction is allowed only after several reminders.

The borrower, however, has the first right to participate in the auction of his gold. 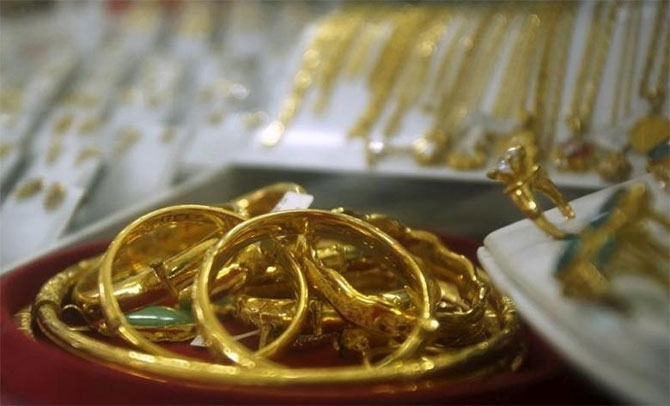